The Sims 4 Review: Journey to Batuu

The world of Star Wars has also landed in The Sims. Journey to Batuu, the new expansion for The Sims 4 themed Star Wars is reality, and today we want to tell you about it in this new review

On the morning of September 8, EA released the brand new expansion for The Sims 4 a tema Star Wars, presented quickly online during the Gamescon 2020. The DLC, called Travel to Batuu, inserts the context as famous as it is beloved of Star Wars, in one of the most long-lived and acclaimed videogame franchises ever. Without further delay, let's land together with Batuu with this review entirely dedicated to The Sims 4 and Star Wars!

May the force be with the Sims

When the trailer for Journey to Batuu, the new Star Wars-themed expansion for The Sims 4, was presented during the Gamescon, we tried a bittersweet sensation of pleasure mixed with fear and perplexity. Combining two brands with such high-sounding names is often a dangerous maneuver and keeping expectations high is by no means easy. In addition to this, renewing such a game in the sixth year of life is even more complex.

As a die-hard fan of both the most famous star saga of all time, and the life simulator par excellence, I was actually a bit skeptical about this gimmick. After a couple of hours however, thanks also to the way in which the context of Star Wars has been inserted in the world of the Sims, I have completely changed my mind. Curious huh? Find out all the details in this review of The Sims 4: Journey to Batuu. 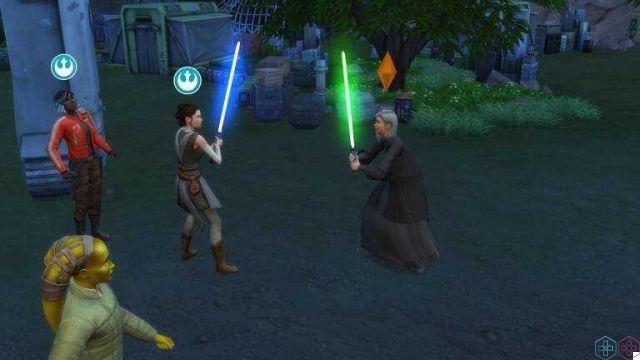 Resistance or First Order? - The Sims 4 review: Journey to Batuu

The Sims 4 over the years has been enriched with numerous DLCs and expansions of all kinds. Star Wars: Journey to Batuu is just yet another (albeit different) attempt to enrich an already extensive gaming experienceor. After installing the DLC, it is possible to find the planet of Batuu, the protagonist of this expansion, among the places that our avatar can visit. Nothing invasive or overwhelming then, since we will keep our progress totally unchanged. This "side" position of the package is already a good choice, offering players the opportunity to measure their Star Wars experience.


For the occasion we create a new character, and already here we find some pleasant notes of the expansion. In addition to the numerous cosmetic items, the aspirations "Hope against Order" and "Galactic Corsair" (for those who do not want to take sides) have been added. The "Create a Sim" mode itself has not been particularly varied, and we find among the hats some "heads" peculiar to the alien races of the saga. Nothing striking in the choice, but still it's nice to be able to play Darth Maul, a musician of the cellar band or a Twi'lek.

The clothing department is completely different: the choice of clothes is very varied and the costumes are rendered to perfection. In the suits you can find the clothes that characterize the First Order and the Resistance, as well as the outlaws. In this regard, it is especially pleasing to note that the pack refers to 100% the unmistakable style of Star Wars, despite the large variety of objects. At this point we put on our Mandalorian outfit and set off to explore. 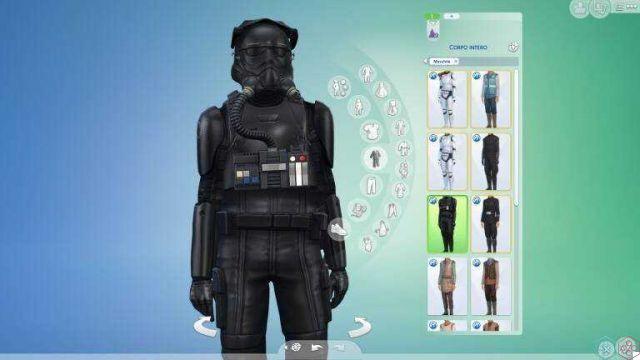 Welcome to Batuu - The Sims 4 Review: Journey to Batuu

Having landed on Batuu, we realize how the structure of the explorable environment is very simple but at the same time enclosing some of the iconic places of Star Wars. The central area is formed by the Black Spire Outpost, the hub of Batuu's commercial activities. Here we find the Roast of Ronto (a sort of space tavern) and the Baia d'Attracco 7, the Tana dell'Antichità dell'itoriano Dok-Ondar where it is possible to buy souvenirs and the Cantina di Oga. Exploring with a bit of curiosity it is possible to find the Millenium Falcon, the X-Wings and numerous other references to the main saga.

In addition to the central area of ​​Batuu, it is possible to access the Rebel camp (hidden in the woods) or the First Order neighborhood. At the start of our campaign, we will be asked to choose a side: based on our choice, some content will be available. For example, by choosing the Resistance it will be possible to access a X-Wing or challenge Rey to a duel. On the contrary, by joining the First Order you will have access to astromech droids and TIE Echelons. In this vein, each faction will have its own dedicated missions, although some are available regardless of the choice.

By completing missions (or playing Sabacc) you will get galactic credits, the exclusive currency of this DLC essential for purchases on Batuu. In addition to this, the missions completed will also earn us respect, increasing the "faction" indicator. With each new rank obtained, we will unlock nice rewards, such as additional clothes, decorative items and new interactions for the character.

There's no place like Home - The Sims 4 Review: Journey to Batuu

One of the most loved features of The Sims by the public is certainly that relating to the personalization of one's home. The construction and furnishing of the house has always been one of the central points of the game, and in this Journey to Batuu there is no shortage of content. The dedicated mode, in fact, is enriched with many furnishing objects, as well as preset environments.

The already complete rooms show great attention to detail, and you can also find exteriors such as the Garden of Meditation or Distant Desert with the Resistance tents included. As for the interiors, however, the DLC lacks a bit of poverty and redundancy. Most of the interiors tend to be "commercial" and many of the elements are more suitable for cellars and gambling dens than for a real home.

The large amount of themed embellishments post-apocalyptic space certainly immerse the user in the Star Wars universe, but it would also have liked to be able to complete a house (for example) in the Tatooine style or any other style taken directly from what has been seen in the numerous episodes of the saga. Furthermore, as a prerequisite, objects with interactions are scarce compared to purely aesthetic ones. In any case, if you want to entertain yourself in a game of Sabacc or engage in a duel with lightsabers, with The Sims 4: Journey to Batuu you are definitely on horseback. 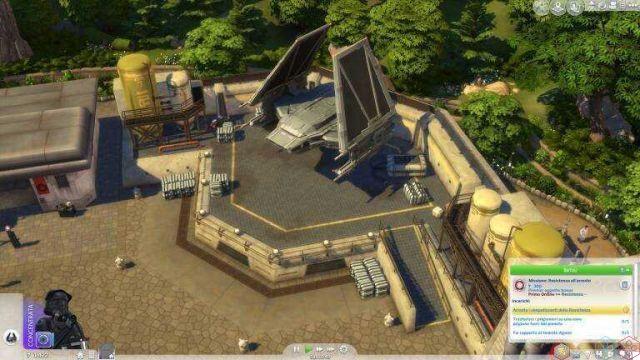 The Sims 4: Journey to Batuu may turn out to be a product of double cut. Although it is a product restricted to a well-defined slice of the public, there is no doubt that a resonant name like that of Star Wars always has a certain effect. Especially for avid fans of the series, who may have caught The Sims 4 for free during the Origin offers, to spend a more than adequate price to bask in the streets of Batuu.

Probably a more generic space-themed expansion would have attracted a larger share of users, but it is clear that this is not the main goal of EA, which has probably opted for a product strongly branded to give new polish to a series that is beginning to feel the weight of the years.

We would have liked a slightly richer and less commercial-oriented domestic catalog, but all in all we are not complaining. The variety of missions and activities is satisfying, and the easter eggs scattered across Batuu strike right to the hearts of fans. For the modest sum of 19,99€, then, it is absolutely recommended. The Sims 4: Journey to Batuu is available on all platforms that support the game.

We hope to have entertained you with ours review of The Sims 4: Journey to Batuu, and we are curious to hear your opinions about it. As always, we invite you to stay tuned to techigames for more reviews, guides and much more about the world of video games. Hello, and may the force be with you!

Those Who Remain review, an ambitious, unsuccessful hybrid ❯

add a comment of The Sims 4 Review: Journey to Batuu