A Maison, many murders and a puzzle game that believes itself to be a detective story, and it succeeds. The Sexy Brutale is the surprise you don't expect. Let's find out in this review

The Sexy Brutale it's one of those video games that you don't expect much from. One of those you start playing by chance or out of simple curiosity.

But The Sexy Brutale is also one of those video games that, after a few minutes of playing, keeps you glued to the pad. Ready to enjoy it all in one breath.

Not that it takes long, the game lasts approx about ten hours. But it's all worth it. Let's find out why.

In The Sexy Brutale we will find ourselves inside a very special casino. We will wear the robes of Lafcadio Boone, a priest who is entrusted with a very important mission. We should in fact save all casino guests from certain death. The mission is entrusted to us by Bloody Girl, a woman who appears from a pool of blood underground.

The Bloody Girl will give us, at the beginning of the game, a pocket watch. This will be our travel companion… in time. In fact, the clock has the power to bring us back "to the beginning of the day", ie 12:00. By 00:00 we should be able to save the guest in question, who will see his death come true at a specific time. We should therefore understand how spying from the locks on the doors, understanding which weapon will be used and how to stop it, all this without letting anyone see us. The cycle will repeat itself for each guest present.

Another useful item is the mask that is given to us. This, like those of all guests, has a unique power, which is to ignite when we are entering a room where another character is. If this happens, don't worry. We have plenty of time to escape from the mask of the other character, who will chase us up to "capture" us (provoking, if he succeeds in his intent, the game over).

Lafcadio will have the opportunity to understand the unfolding of the assassination over and over again by going back in time. If this happens often, don't get down on yourself, the aim of the game is to go back in time whenever you need to. To know all the movements of the guests and their speeches, we could spy on them from inside a wardrobe, or from the lock of the door. In addition we should collect various objects from the ground. This is made easier as the most important objects are circled with yellow. Doors, as well as secret passages and stairways, are circled in green. Secondary objects, which are often libraries or the like, are circled in blu. 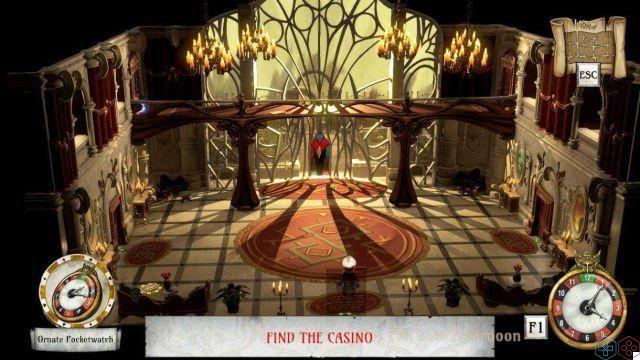 Actually The Sexy Brutale more than a puzzle game can almost be described as an enjoyable graphic adventure, as the difficulty is minimal while the graphic and environmental details, as well as the plot, are very defined aspects.

For example, we will hardly be captured by another mask. Understanding how to save our guests will be quite easy even if sometimes less intuitive. However, patience and going back to follow our guests step by step is a good trick to facilitate this. I could say that it is almost more difficult to figure out which and where the next guest to save is (since there is an order to follow) than to save him.

… But playing it is a pleasure for all senses

The artistic sector, on the other hand, is magnificent. THE sounds they are perfectly harmonized. Every step, beat or anything that creates vibrations has a perfectly successful sound. In addition, during the 12 hours during which we are supposed to rescue our guests, we may hear the sounds that refer to the death of each individual guest. Sounds that we will learn to grasp only when we have saved our guest who, for some lack of ours, going back in time will continue to die. By the way, don't worry if the guest you saved earlier will die after you go back in time! If you try to save him again, Bloody Girl will give you some clues as to how to permanently secure him.

Coming back to us, not only the sound sector is magnificent in this game. The design and the attention to detail gives the eye what it deserves. Each character, room and object is made so that the player can fully enjoy the artistic show of the title.

A peculiarity as cute as it is disturbing is that of the rain of blood that starts from 23 pm until the end of time, at which time we will be thrown back in time automatically.

What goes and what doesn't

The point in favor of the game is definitely there map. The fact that any event happens within a single Home characterized by many rooms and floors, it is a stroke of genius.

Perhaps, beyond the simplicity of the game in the starting points, a point against The Sexy Brutale is the absence of Spanish. Despite this, the fact that the dialogues are written and above all almost always short, helps to understand the speeches made between the characters without a too high level of knowledge of the English language. 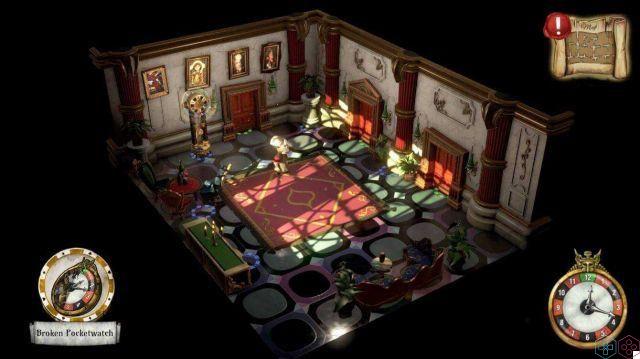 The Sexy Brutale: the conclusions

At the end of the day The Sexy Brutale it's a great game. Of short term yes, but equipped with a excellent sound sector, for an wonderful graphic look it's a plot compelling.

Not to mention the ending. Wonderful. It looks like a poem.

In short, a game to try absolutely.

The Stanley Parable review: the video game that isn't ❯

add a comment of The Sexy Brutale review: a beautiful surprise