The Stanley Parable review: the video game that isn't 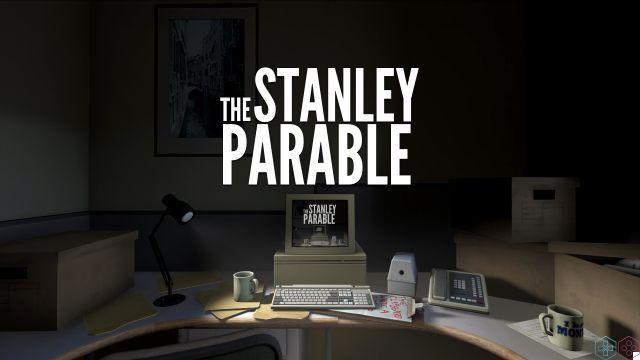 Get ready to leave reason aside and enter a world where chaos reigns supreme. Here is The Stanley Parable

It was the year 2013 and, among the many games that were coming out, there was one that stood out for its originality. We are talking about none other than The Stanley parable. Born as a simple one against di Half-Life 2, the players liked it as much as its creator Davey Wreden, decided to release it as standalone game su Steam. But what makes this video game so different from others? Let's go and find out together.

This is the story about a man whose name is Stanley.

This is how the narrator begins. In a "megacity", Stanley is an employee in room number 427, whose job is to press buttons on a keyboard. Which buttons to press and in what order are shown on a screen in front of him. One day, however, no more arrangements appear on the screen. Determined to find out why, Stanley gets up and leaves his office for the first time during working hours. Discovering that the building is completely deserted. And this is where the actual game begins.

It is difficult to talk about gameplay in dealing with this title since, in my humble opinion, this game transcends what is its purpose, which is the intent to entertain. The Stanley parable it's a psychological journey, which will make us discover our own nature. In every moment of the game we will be asked to make choices and, from what we choose, we will determine the nature itself of the video game.

There are indeed 6 possible endings and an incredible number of places to visit. Each ending will make us raise some questions on the nature of the video game and in the end it will also seem to us that we have not played any video game. I don't want to go any further, also because words are not enough with a game like this. In order to fully learn the nature of the gameplay you have to play it.

I should have included it in the gameplay paragraph it is true, but it is so fundamental and brilliant that it deserves a separate paragraph. The actor behind the narrator is called Kevan Brighting and the work he has done in The Stanley parable earned him an AI nomination BAFTA Awards. He is the narrator, the voice that will accompany us throughout the video game. He already knows what to do and we just have to follow his orders. But if we decide not to, what could happen? He gets angry, tries to be even understanding, coming to us and creating play areas that he thinks can meet our approval. However, it can also decide to ignore us, leaving us to our fate.

But if things don't turn out right, it will make us start the game all over again, making us hate it to death. The jaw-dropping thing is that no matter what choice we make, there will always be the narrator who will criticize or praise our decisions. So it's great to play and replay this game over and over again, not just for the endings, but also to hear the genius lines that sprung from the mind of the developers and flawlessly acted out by the voice actor.

As for the graphics, the game uses the same engine as Portal, Or the source Engine. So do not expect a latest generation graphics sector, even if I must say that it is pleasant overall. Thanks to this however, the title can be practically played on any PC smoothly and without jerks.

The Stanley Parable, let's sum it up

If my review seemed confusing to you, trust me… the game is no different. The possibility seemingly infinite of choice will make you feel a great sense of freedom, even if after some time you will wonder if the game itself is not deluding you. Certainly you will come to a point where you will wonder if everything you do is truly your own free will or not. I highly recommend it, because you would rarely be able to play such a particular video game.

add a comment of The Stanley Parable review: the video game that isn't