In this review we will tell you about Star Renegades, a very interesting tactical RPG with roguelite elements developed by Massive Damage Inc.

Massive Damage Inc. is a small one software house indie that some of you will remember for your excellent work with Halcyon 6, their first independent game. Now after 4 years the company is back in the spotlight thanks to Star Renegades, their new tactical RPG.

Massive Damage has already shown a certain skill in developing this genre of games and for this reason fans expect a title of excellent quality. Will the company be able to meet the expectations of gamers? Discover it with us with ours Star Renegades review.

Star Renegades is set in a science fiction universe where the mighty army of the Imperium he travels from one dimension to another with the aim of subduing as many worlds as possible. To cope with this threat, a famous scientist has designed J5t-1N, a small robot capable of traveling between dimensions.

Through J5t-1N the players will have to help the resistance to counter the Imperium, also helping to train and coordinate the Star Renegades, an improvised group of heroes from all corners of the galaxy. Saving the universe, however, is not an easy task and in an emergency you may be forced to escape to a new dimension, where you will have to start your fight against the Imperium from scratch. 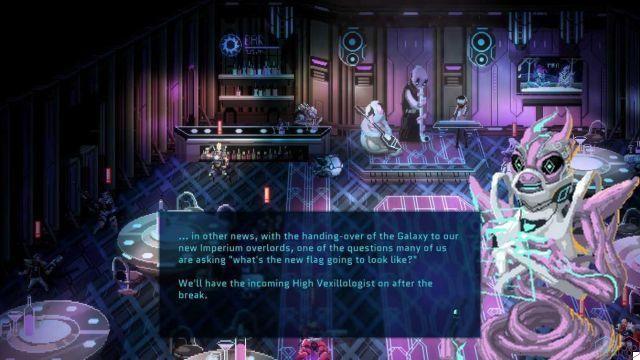 The only thing standing between the Imperium and the total conquest of the universes are the Star Renegades. These legends have come from all over the galaxy to save their world, but they do not correspond 100% to the definition of a hero. In fact, many members of the Star Renegades are not positive characters at all, but they are criminals, murderers or mercenaries. The heterogeneity of the group, however, represents a big advantage, given that different heroes are suitable for different roles.


In total in the game there are well 13 heroes and each of them will feature unique personality, class and skills. We have noble warriors who specialize in frontline combat, snipers capable of eliminating enemies with one shot, and religious robots capable of providing support for the whole team. Despite their great differences all the members of the Star Renegades are very personable and ready to make friends with their mates. This is the basis of one of the most interesting and original mechanics of the game, given that in the short moments of relaxation during the missions the heroes will be able to interact with each other and forge bonds.

All this takes place within thecamp, where the characters will be able to use unique cards to offer bonuses to allies and improve relationships. As the friendship between two members of the Star Renegades grows you will have the opportunity to discover new details about their past and unlock passive power-ups, devastating combo attacks, and in some cases even new heroes. These unlockable allies can be completely new characters but also "heroes progeny“, That is, alternate versions of heroes already present that they differ in terms of skills and characteristics such as life points, shields, and armor. 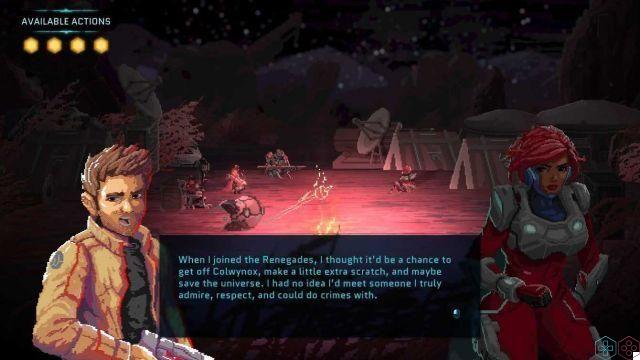 Let's talk now about the main focus of the game, the fight. In Star Renegades our heroes will face turn-based tactical combat where the order of the actions is decided on the basis of a timeline. Each round lasts 60 seconds e each attack takes a different time to be executed, so the heroes with the fastest attacks will be the first to act each turn. Learning to manage the order of attacks will be key to winning, as by attacking an enemy before they can act you can give them a critical hit.


In Star Renegades, critical hits don't just deal more damage - they can too apply powerful penalties, such as armor reduction or i delay. In particular, the delays are the basis of the gameplay of the game, since they will be applied by almost all attacks and will allow you to delay the actions of the enemies hit or even force them to skip the turn. In addition, critical hits will also allow you to accumulate fury points, needed to activate combo attacks and some unique skills.

If you want to avoid letting your team go to a bad end, you need to plan your actions in the best possible way the game will meet you. Star Renegades will provide you with all the information you need for combat in the round timeline, specifying the order in which enemies will attack, their target and also their attack. Furthermore, at any time you can select your opponents and carefully observe strengths, weaknesses, statistics, and so on. Thanks to this large amount of information you will have a complete picture of the situation and you can always plan your next move perfectly. 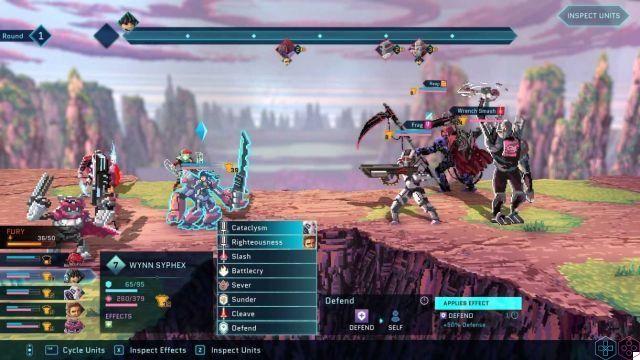 To thwart the threat of the Imperium you will have to destroy their mothership, but first you will have the task of preventing some specific planets from being destroyed. To do this you will have to go down to their surface and try to defeat a powerful unit called "Behemoth". But hunting down this fearsome opponent will not be easy at all, given that upon your arrival the forces of the Imperium will already be in place.


During this phase of the game you will have 3 days of time to reach the center of a certain area of ​​the planet and finally defeat the Behemoth. Unfortunately, however, before your arrival the enemy army he will have already fortified the area by dividing it into sectors. To be able to enter a fortified area you will first have to breach its defenses and this will take a long time, allowing you to enter only 3 sectors each day.

Having limited time to reach your goal you will have to carefully plan the best route to follow. Some sectors contain useful treasures, equipment, or very tough mini bosses, but reaching them may take too long. Also as the days go by some areas will be sealed completely, preventing the passage of your team.

Planning the best path within the levels is a lot of fun, but as time goes by maps risk becoming repetitive. In total there are very few biomes and besides randomly placed bonuses and treasures there isn't much to see. In some cases it is possible to find secret points of interest or mini dungeons, but between games they will vary only in terms of position. Furthermore movement within the maps is slow and often inaccurate, making exploration almost always very annoying. 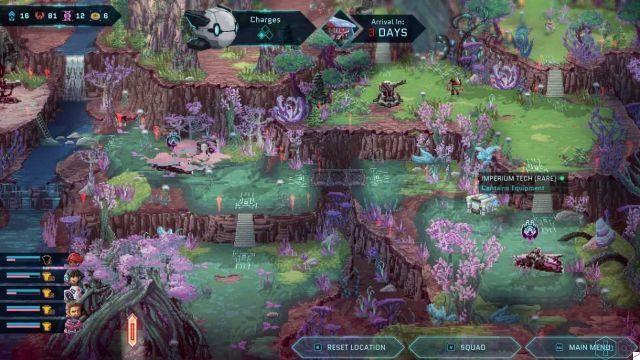 Like any self-respecting roguelite, Star Renegades also offers the player the chance to unlock tons of new items between games. By defeating the enemies and completing the levels you will have a chance to earn Tech and Intel, two currencies that you can spend in exchange for various items at the end of each run. The upgrades that can be purchased this way are very varied and range from new equipment and permanent passive bonuses up to even new heroes. Moreover, during the games you will also earn one third currency, which will allow you to unlock exclusive traits that will provide characters with new and useful bonuses.

In Star Renegades however in addition to your characters enemies will also be able to power up between games. Thanks to the system Intelligent Adversary, Imperium officers who survive a confrontation with your heroes will be able to reappear in the next universe. This system is very nice in theory, but in practice fails to achieve the desired effect. The minibosses of the Imperium will always be very similar to each other both in type and personality, so often you will not even realize that you are facing an enemy you have already faced in the past.

This system, however, is not linked only to the officers, but also to the final boss of the match. To avoid spoilers we will not explain in detail how the last boss will change from one run to another, but we can assure you that in this respect Massive Damage has hit the target. 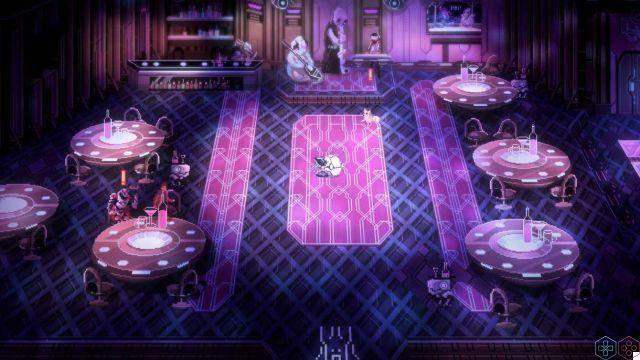 Except for the intro video, Star Renegades is made entirely with a pixel-art technique to say the least stupendous. Maps and backgrounds are truly enchanting, and so too animations and effects they are no less. Add to this also great care in the design of the enemies, which are always very varied and difficult to forget. The music is also very beautiful, but for sure we would have appreciated some more tracks.

Massive Damage did a great job on the technical sector of the game, as we have never encountered any serious bugs or frame drops. The only downside is a little bit of inconvenience in handling the HUD during combat and some problems in the exploration of the maps. 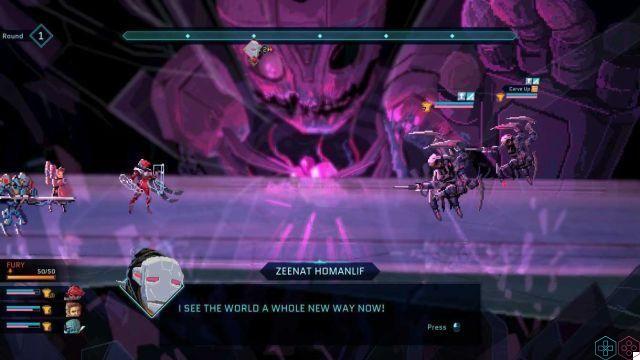 Complessivamente Star Renegades it's a really good title which, despite its complexity, is suitable for both veterans of the genre and newbies. The game features strategic combat in which the player is always aware of everything that is about to happen on the pitch, so you can wisely react to opponent's moves. In addition, the fights will always seem very different with each run, thanks to the possibility of create teams by drawing on a very large and varied pool of heroes. The only two negative notes are represented by theexploration, often boring and repetitive, and from the Intelligent Adversary system that does not always manage to hit the target.

Star Renegades is available today for PC on Steam. If you are interested in staying up to date with all the news on the world of video games and much more, then keep following us here on techigames.

add a comment of Star Renegades review: traveling between dimensions