Review The Gardens Between: simplicity and childhood

The Gardens Between is a puzzle game that focuses on the simplicity of childhood: let's find out in our review if it's worth buying

It is often thought that telling a story is more difficult if it is complicated and intricate. In truth, most of the time, a simple and limited intertwining is the hardest to deal with. The daily friendship between two young boys is the subject of The Gardens Between, a work that, for better or for worse, makes simplicity its strong point.

Let's see in our review if this little puzzle game convinced us all the way. 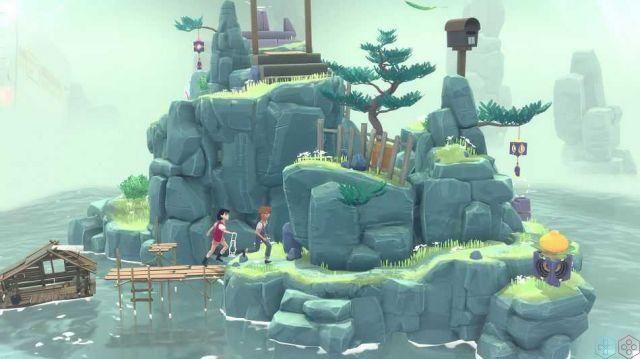 Our adventure begins on a rainy evening, in the tree house of two friends, neighbors. Suddenly, a sphere of light radiates the small private space of the two and transports them to an archipelago of tiny islands. Each of them represents a memory, an adventure lived side by side. Our little house becomes our raft that will allow us to navigate this imaginary sea.

Each island is a level, a small challenge during which we will have to guide the two young people. We will not have direct control over the boys, but we will have to advance or rewind time: by doing so, we will see the protagonists progress or retreat in the exploration of the island, a small spiral world that rises to the top. Obviously the new adventurers will have to overcome obstacles: everything revolves around a lantern, held in the hand by one of the two. The lantern has the ability to absorb light from strange flowers, which can then be used to activate various passages. The second young man, on the other hand, can interact with the game world, pulling cords that activate the aforementioned flowers or activating hourglasses that allow us to control the time of specific elements (for example wooden blocks that are falling) so as to stop them in position. more useful to advance. 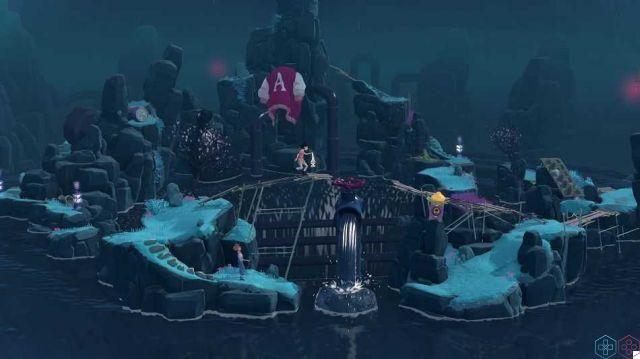 The two protagonists, as we have said, move on their own initiative following specific paths: our task is to combine their movements, stopping in the instant during which they can interact with this or that other element, so as to free each other's way. . The challenge is low enough and it will always take a few moments to understand what we have to do. Occasionally some intriguing ideas are brought up, but few of these evolve as you advance in the game.

The Gardens Between: little but good | Review

The Gardens Between therefore plays the card of simplicity to be able to flow fluidly and quickly. As a result, longevity suffers considerably: in fact, it only takes a couple of hours to complete the adventure. Plenty of levels feature extra interactions or small challenges that unlock most trophies - completists will likely want to explore the game a second time to get them.

On the narrative level, however, simplicity is one of the greatest strengths. The adventures of the two protagonists on these small spiral islands represent shared memories, small and sweet moments like a rainy afternoon spent in a pillow fort. Everything is told without spending a single word, but with the help of a small skit, unlocked after completing a group of islands. The islands themselves, however, tell something, both with the objects that compose them, and through the actions of the two boys. 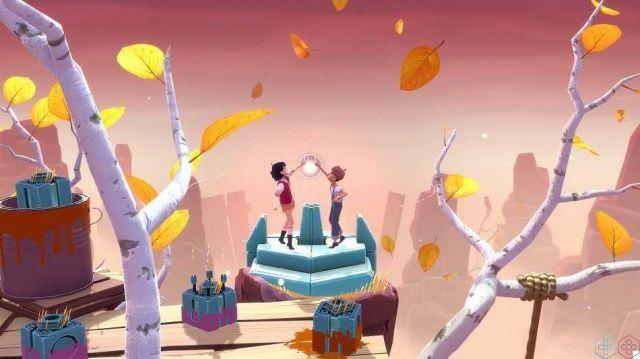 The protagonists, in fact, are able to express their passions and their character simply by moving and observing what surrounds them. The young man carrying the lamp is adventurous and always chooses the riskiest paths, while his friend prefers to stay safe and, being the couple's nerd, is always attracted to electronic objects. The Garderns Between is therefore able to speak without opening its mouth, telling a bond with universal connotations without being banal or obvious..

All this is accompanied by a valid artistic sector: the islands are microcosms of objects and colors that are very beautiful to see. The sound component is also perfectly adequate, with its calm tones composed mostly on the piano, but with a strong influence from electronic music.


The Gardens Between: semplici emozioni | Review

The Gardens Between is a small work designed for those who want to get away from the pressure of everyday life for an evening or two, reliving childhood memories. As a puzzle game, The Voxel Agents work doesn't have too much to say, but overall it convinces. If you just want to enjoy some peace in a colorful little world, this is the game for you.

The Gardens Between will be available tomorrow, September 20, 2018, for PC, PlayStation 4 and Nintendo Switch.

7.9 As simple as childhood

add a comment of Review The Gardens Between: simplicity and childhood