Review Nioh 2: the journey of a Yokai warrior

Over time, many titles belonging to the genre have come out soulslike, but only a few of them managed to stand out enough to get their own identity and in 2017 Nioh was one of them. Now 3 years later Team Ninja has realized Nioh 2, a prequel capable of offering players the same experience as the first chapter but with a few more additions.

The plot was never and never intended to be Nioh's strong point, and in this new chapter that hasn't changed. The story of Nioh 2 revolves around our protagonist, Hide, a half human and half Yokai creature. After a fortuitous encounter with a man called Tokichiro, our protagonist will start traveling all over Japan in search of precious magical stones.

After this opening the story will continue in one way extremely linear, with our protagonist who will assist several lords to fight against the Yokai and the armies of their enemies. Although there are some interesting moments from time to time, most of the time history is studded with very similar events. A lord fights against our lord, yields to the power of the Yokai, is defeated and then everything is repeated with another lord.

For most of the Hide game it won't have a real reason to do what it does, but will simply follow the directions of the other main characters. Moreover, unlike William, the protagonist of Nioh, in Nioh 2 our character will not speak, resulting as a consequence even less deep. 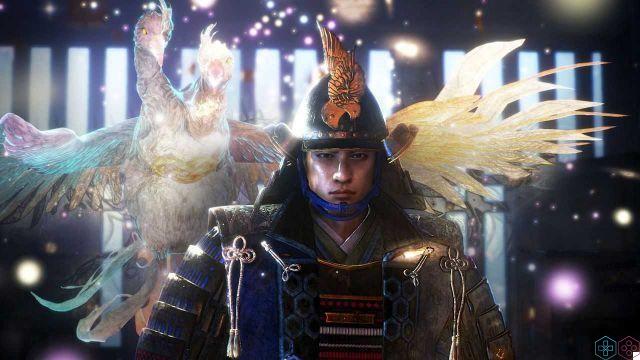 The way of the samurai - Review Nioh 2

Now let's move on to the focal point of Nioh 2, the gameplay. The title resumes the same combat system already seen in the first chapter, based on the management of stamina, called Ki, and the combination of three different fighting styles for each weapon. This combat system is extremely complex and it may discourage novice players, but once you master it the game will change dramatically. Taking down the Yokai using perfect Ki rhythm and well thought out combos will be able to give you some enormous satisfactions that you will hardly get in other titles.

In the game there are well 9 categories of close weapons and each of them can be exploited using a high, medium or low handle, so as to perform attacks with different power and speed. The weapons will be very different from each other and the variety of moves available will increase as you use them. By killing many enemies with a certain type of weapon, you can get specific skill points that you can invest to unlock new attacks and passive skills. Once you are familiar with a weapon, your play style will completely change becoming extremely more varied and fun compared to the initial stages.

In addition to melee weapons, the game also offers a large number of tools able to further increase the depth of the gameplay. You will use ranged weapons such as bows and rifles to eliminate enemies from afar, or take advantage of gods Consumable to boost your stats. Moreover, depending on how you manage your character, you can also unlock several magical techniques and ninjutsu, capable of providing you with various advantages in battle. 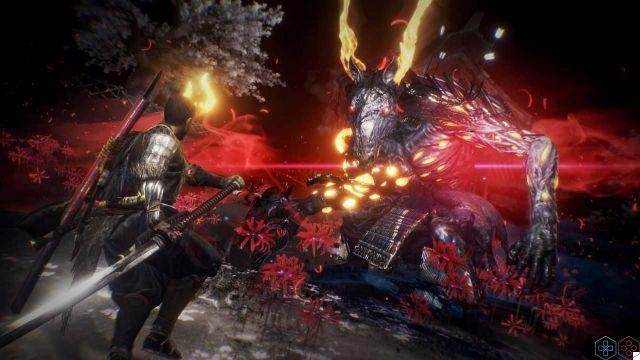 One of the biggest additions to Nioh 2 over its predecessor is the ability to take advantage of different techniques normally used by Yokai. Our protagonist will have the ability to transform into a Yokai and this transformation will vary according to the type of guardian spirit we are using. Exist three different transformations, one dedicated to speed, one to strength and one to magic, and each of these forms can use different moves.

One of the most important techniques that we will be able to use in Nioh 2 is the explosive counterattack. This move will allow you to temporarily transform into your Yokai form for parry some specific attacks enemies and if you can block them with the right timing you will be able to severely damage their Ki. The execution of the explosive counterattack changes a lot depending on the Yokai transformation you are using and in some cases it will be easier to block certain attacks with a specific transformation.

Another very interesting addition of Nioh 2 is that of being able use the attacks of hostile Yokai as if they were yours. Sometimes a dying enemy could leave a grounded core soul, that is an object that will allow you to exploit the power of that Yokai in combat. These cores will first need to be equipped to your spirit guide, but you can't just use them all, since each of them will have a cost which must not exceed the maximum limit of your spirit. Moreover, every time you use these attacks you will consume a portion of your soul bar, but to fill it again it will be enough to hit your enemies. 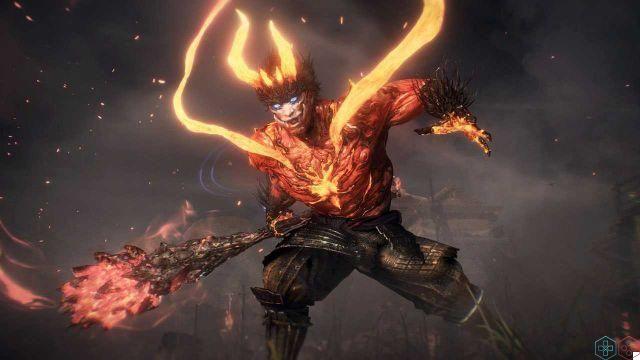 Nioh 2 will once again be set in a fantasy version of the classic Feudal Japan 1500s. The scenarios will mainly represent castles, temples and other landscapes typical of that period, but will also be peppered with many magical and supernatural elements. Unlike the maps of the first Nioh, the areas of this prequel are quite varied thanks to a good level design, which offers very complex levels, full of secrets and with many unique elements.

Also the design of the Yokai has improved a lot compared to the first chapter, offering very different creatures. Unfortunately, except for the bosses, they are there very few new creatures in this title and most of the demons were taken directly from the first Nioh. Despite this, however, the union of old and new creatures manages to create a good sense of variety within the game and if you have not played the previous chapter, and specifically the DLC, you will be amazed by the huge amount of enemies. 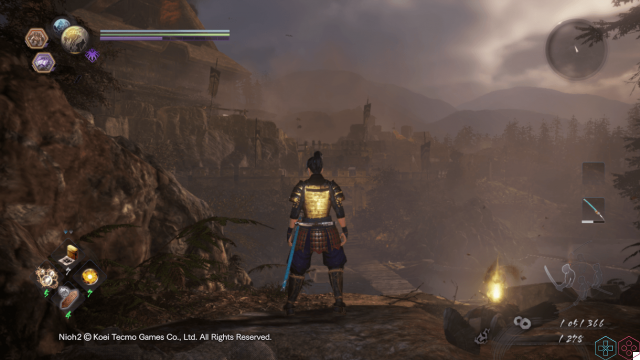 Not an easy approach - Nioh 2 Review

Just like its predecessor, Nioh 2 is a title very difficult and this difficulty is felt in particular in the first hours of the game. Going forward we will have more and more tools that can make our life easier, but at the beginning of the game we will have very few resources. This sudden peak of difficulty risks putting newbies in serious difficulty, who could run into big walls right from the very first missions.

Moreover, the first levels are also those in which there are the greatest number of unjust ambushes throughout the game. It is never pleasant to be killed by an enemy hiding around a corner, especially in soulslike of this type where at every death there is the risk of losing all the accumulated experience.

As if this were not enough at the beginning the players will have to deal with another wall too, the statistics. In Nioh 2 oEach single item will provide us with passive bonuses: weapons, armor, guardian spirits, soul cores, in short, everything. These bonuses are really many and in the first few hours anyone would feel overwhelmed by such a large amount of information. In addition, although it is easy to understand what they are for, too features present pitfalls. Each feature performs a specific task and for a novice player it will be very difficult to understand what to upgrade by leveling up at the beginning.

Fortunately, however, Nioh 2 has also included some elements that can make life more comfortable for players. For example, adding the Bazar Kodama in sanctuaries allows you to retrieve elixirs and other commonly used items without having to farm. Or the automatic recovery of the guardian spirit entering a boss's arena makes it less frustrating to retry a fight multiple times. But the most useful addition for struggling gamers is definitely the ability to easily summon another player's spirit. 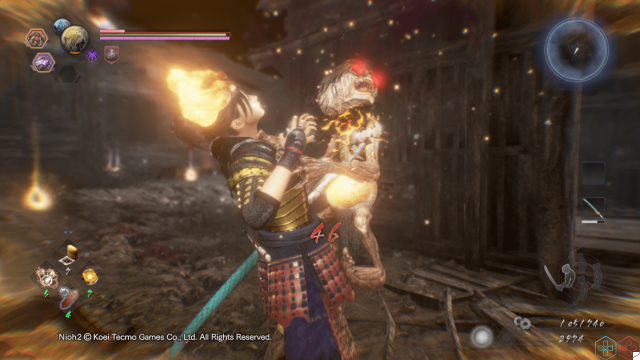 Nioh 2 offers the possibility to choose whether stabilize the frame rate or resolution of the game, thus allowing you to customize the gaming experience. Having a stable frame rate is essential in games of this type and having the choice is always good. In exchange for a stable frame rate you have to compromise with lower graphics quality, but that's in any case does not excessively damage the performance of the models and environments of the game.

From the options you can also change a disproportionate number of game settings. There are settings related to the mini map, the color of the objects, which drops to collect and much more. These settings will certainly be more useful to players who are already familiar with this type of titles, but their presence is very welcome in any case. 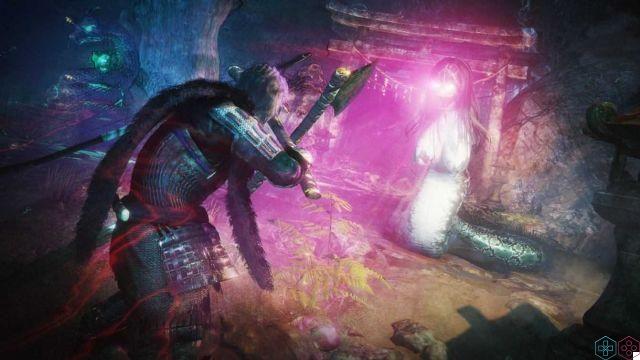 Nioh 2 is a great one more of the same of the first chapter enriched with some additional elements and more refined levels. The title is extremely long-lived and in addition to a very long-lasting story mode, it also features a really broad end game.

Once the main story is finished you can try your hand at numerous challenges and side missions, but also in a new game plus which is not only based on an increase in enemy parameters but also on a different positioning of some opponents. Nioh 2 it is by no means a title suitable for everyone, but if you manage to overcome the initial difficulties and master the combat system, it will be able to offer you a lot of satisfactions.

Nioh 2 is available now for PS4. If you are interested in staying up to date with all the news on the world of video games and much more, then keep following us here on techigames.

add a comment of Review Nioh 2: the journey of a Yokai warrior