The adventure of Travis Touchdown continues: we hold your hand on a journey through the improvements of No More Heroes 2 in our review

In writing a review of No More Heroes 2, we are almost forced to refer you to the points of the previous one - because we will take up several of them. Or rather, maybe just one would be enough. The point, the very raison d'etre of the first episode lay in making the very premise of an antihero happy to leave a trail of blood behind him pathetic. Faithful to its unpredictability to the end, Goichi “Suda51” Suda he wanted to subvert expectations again with the second episode. The result, in terms of plot and gameplay, gives us everything that the first chapter promised (lying) to be.

To go into detail, we are faced with a game that abandon the open-world sequences and the "mini-games" of the predecessor in favor of a more streamlined structure, capable of providing substance at full speed. The backbone of the gameplay in the fights, the chores to be done, and every strength that we appreciated in that full eight and a half is present again, but in a more marked way. At the same time, however, by abandoning all ballast, Suda51's relatively new balloon can take off for real.

This is not to say that the deconstructive verve with which we have established a love / hate relationship with the first No More Heroes is not present, however. Nothing further from the truth: the protagonist, Travis Touchdown, continues to be the slimy moron we love. A tragedy helps kickstart the plot, putting Travis at the center of the desperate struggle (or Desperate Struggle) that the game's subtitle alludes to. The main theme, this time, is that of revenge. This already succeeds in the intent of better contextualizing Travis's motivations, without however that the style - narrative and otherwise - is affected.

The tones of No More Heroes 2 remain in fact strictly above the lines, as we found in the review phase. Although the thirst for revenge is driven by pain, that doesn't stop the game from completely freaking out. On the one hand, Travis vents his despair by killing the other killers "while others", to paraphrase his words, "have affairs at funerals"; on the other hand, already in the first hour of the game it is possible to find yourself in a clash between mecha giants. All this, especially at the beginning, amidst countless breaks on the fourth wall. 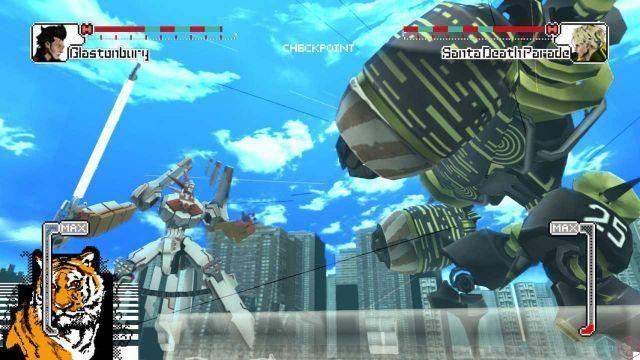 Il tutorial with which the game opens already offers us a welcome contrast to the lethargy of the opening bars of the predecessor. We will go into more detail later, but we would like to close our section dedicated to the plot by contextualizing this incipit: the killer with whom we clash is the brother of the character seen in the opening movie of the first game. The battle ends with a beheading; his head falls "upright" on the neck of the victim, while a combination of black, yellow and red in Sin City style tells us "Skelter Helter: RIP". Welcome back to No More Heroes 2.

From this point forward, the game never stops accelerating. The hybrid between beam katana (eternal phallic metaphor, especially immediately after the tutorial) to load and kicks and punches is always present, as well as lock-on, suplex and everything else. A welcome news, on the other hand, it is the possibility of unleashing ourselves as soon as the "tiger" indicator seen in the first episode turns red: instead of necessarily waiting for the slot machine, this time we can press a simple button to start slashing at simply dizzying speeds. And this is just the beginning.


In terms of exploration, the interior of the motel where Travis is staying and the city of Santa Destroy they have definitely swapped places. Now it is in fact the apartment to be explored, while the large (and, on balance, useless) open-world area of ​​the first game has given way to a more practical menu. The points of interest of Santa Destroy, always few but good, can now be reached with the push of a simple button. In review, No More Heroes 2 encountered a crash while re-selecting the motel, but this is definitely an isolated case. 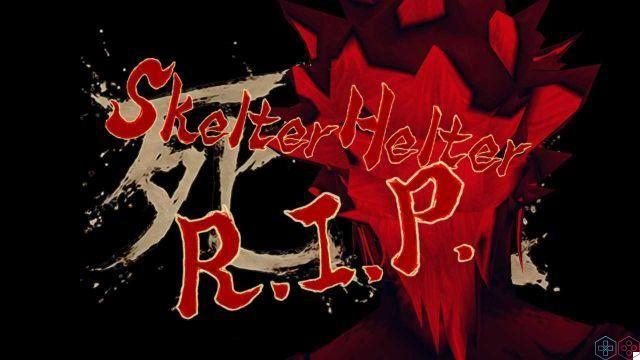 What else does this sequel offer new? The rounded Naomi's workshop and the gym remained the same, but it was the minigames that changed. We have not avoided quoting them at random: this time we are dealing with some funnier jobs than ever, in the form of digressioni a 8-bit that (we swear) they wouldn't be out of place as independent games on Nintendo eShop. Coconut Harvesting is now a platformer along the lines of Miles & Kilo, working as a plumber is an addictive Pipe Dream, pizza delivery reminds us of Accolade's The Cycles, not to mention a convincing bullet hell playable freely in the motel . We would have something to talk about for half an hour.

Also with regard to the secondary missions as a hitman the situation has improved. In place of commissioned killings, we must reunite with our former victims those who yearn for their revenge. As far as the others are concerned digressions, there's not much to say: Travis' customization options are more or less the same, both at the clothing level (shop) and at the health level (gym). On the other hand, our kitten Jeane has gained considerable weight: it will be up to us to put her back on track with a separate quest, composed of food and exercise. 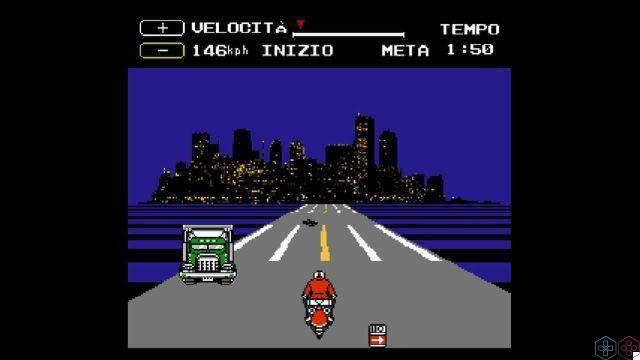 Always quoting the good old Maccio Capatonda, our review of No More Heroes 2 starts towards the avenue of the sunset. So let's start from graphics, about which there is surprisingly little to say. The graphics engine, identical to its predecessor, it was already modest at the time of its release on the Wii. However, it was style that benefited enormously from the cut to parody implementation of open-world seen in Chapter XNUMX. The character of Goichi Suda - and, by extension, of the game itself - has never been more marked, from the small touches (and tweaks) to the big differences. The retro atmosphere in the mini-games gives cheers.

At the level sonoro, also here we are dealing with an excellent job, both in dubbing and in audio effects. The missions are accompanied by the new musical theme chosen for this sequel: if we compared the pseudo-Western sounds of the previous chapter to Crisis Core: Final Fantasy VII, the new backbone of our murders is more on the style of Persona 5. And this, however it is said, it remains a blatant compliment.

Also the longevity of No More Heroes 2 earns points in the review phase, again for the removal of the open world. The latter, if you had not yet understood, was only the ephemeral shadow of what Rockstar (whose logo was ape by Suda51 during the promotion of its predecessor) always manages with mastery. Removing a bogus expedient born to (indirectly) lengthen the stock does not help a very similar amount of content, but at least it makes the longevity of the title much less false. Academic kiss to streamline the earning process to proceed further with the preliminary rounds. 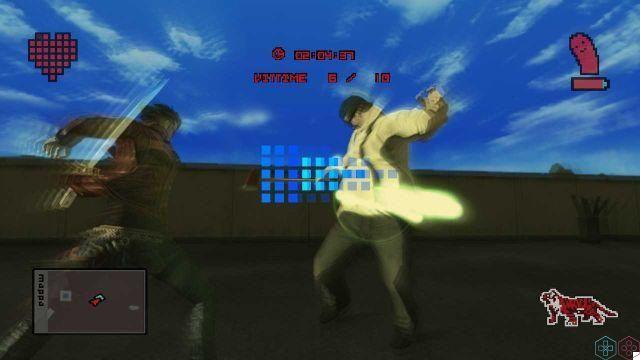 No More Heroes 2 è an excellent following, and the hasty (and relative) brevity of this review serves only to reiterate those improvements with which the development team has worked on the rough diamond that we had talked about here previously. Travis Touchdown's frenzy glows (red) at its best in this unforgettable, delusional massacre. While the storyline is perhaps a little more generic than we've seen before, the pace takes a dizzying advantage, thanks to ingenious mini-games and an imaginative new cast to tear apart. A characterful and confident sequel, born of a Grasshopper in a state of grace. A worthy port of a memorable game.

For this review that's all, we are always waiting for you here on techigames to talk more about video games!

Review No More Heroes: "Mobbasta" with the heroes ❯

add a comment of Review No More Heroes 2: "Mobbasta really though"