Recently released on the market, Imperator: Rome is the new real-time strategy set in the era of the rise of Rome. Will he be able to satisfy us? Let's find out in our review

Paradox Interactive returns to the gaming world with Emperor: Rome, the real-time strategy that will allow you to relive the great expansion of Rome almost since the dawn. Within the title, not only the Roman people will be waiting for you, but also all those who populated the world at that time. How did this title behave? Will it be a good buy or is it better to bet on something else? We just have to start this review and find out.

When starting any game on this game, the first thing that stands out immediately is the care that the developers put into the recreate a world now distant and distant. Particularly charming and certainly very informative, the map accurately reflects the subdivision of the territory in those days now passed, not only from the point of view of the borders between nations, but also from that of the various provinces and regions present at the time.

In addition to all this attention to detail, it can be seen the greatness and vastness of the world rebuilt in Imperator: Rome. A point certainly to its advantage in this review and that distinguishes it from the various strategic games. It is really difficult to find such a large map in one game that weighs just 3GB and which therefore makes lightness one of its strengths, especially if you don't have a lot of storage space.

Although the map appears to be so vast, a separate discussion must be reserved for the gameplay which, contrary to what one might think, sometimes turns out to be flat and bland for a title like Imperator: Rome. The basic idea of ​​the developers can be seen immediately and in fact the game, at least in its early hours, turns out to be compelling and engaging. However, after some time, the monotony and the absence of bite (which should have characterized the title) are felt.

Of considerable importance, in addition to all the standard mechanics of strategic games, is the conquest of a region or province in general. Declaring war will not be a problem, although it would be better first claim a territory in order to avoid small "penalties". The conquest of a province usually takes place in several phases, depending on the presence or absence of opposing troops. After a fight represented by the two men representing the opposing armies, the phase of siege and capture of the territory which can be short or long depending on the strategic importance of the province.

Several factors will affect the progress of your adventure. Keeping all the Roman families who take part in the Senate happy will not be a walk in the park your every decision can be weighed differently depending on their political orientation. The dialogues between the various characters relating to some of these choices will be represented by small dialog boxes not very frequent in addition.

Commerce and diplomacy will be reduced to the bone. All this was intended to ensure greater efficiency during the game, but in doing so they have trivialized one of the key factors of the strategists. Also building construction, who can give small buffs to a province, it is somewhat limited. Under this point it is very reminiscent of Total War: Rome II, even if the construction turns out to be even more reduced of the title of SEGA.

As in any self-respecting review, the time has come to analyze the technical sector of the title. There graphics by Imperator: Rome turns out well taken care of both as a map and as an animation of the units. Very well organized, on the other hand, are the countless pop-up game menus who leave us one clean and well arranged graphics although many options are hidden underneath. 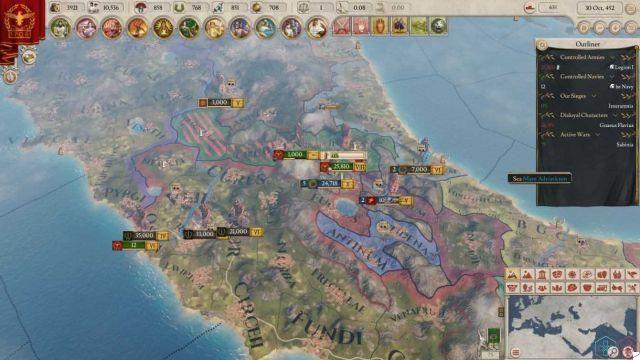 Also the audio sector turns out to be well cared for and set up. A small negative note comes from the management of hot keys on the keyboard. The game time in fact flows pretty quickly (even at minimum speed) and it will often be important to be able to pause everything. However, although one hand will be engaged on the mouse for managing the settings on the HUD and the other with the camera controls, the arrangement of the pause key on the keyboard will turn out to be quite mangy.

We have now reached the end of this review and it is time to take stock. Imperator: Rome is a very game "light", both as storage space and as system requirements. This definitely makes it a good product, also suitable for those who do not have a high-performance PC. Despite such lightness the game is well stocked with one huge map to say the least and a huge range of options accessible through well organized retractable menus.

The first few hours of play can be very difficult, especially to those who are not used to strategists. However, after getting a little carried away, the difficulty will reset and the lack of unforeseen events that can reverse the situation will make it very much monotonous and flat. Surely the idea of ​​the developers is to be appreciated and rewarded, but without an update that goes to implement the game over a long period of time, you risk losing a lot of audience. 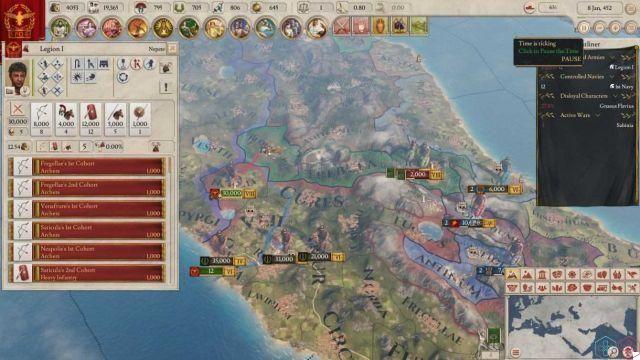 It is important (though not for the purposes of this review) to point out the inability to continue a saved game after the recent update. In fact, due to some bugs, the game keeps crashing every time you try to load an old save. To remedy this, all you have to do is restore the previous version of the game. That's all for this review. I remind you that Imperator: Rome is available for PC at the recommended price of € 39,99. In order not to miss future news on the videogame world and on Paradox Interactive, continue to follow the pages of techigames!

Jump Force review, the fighting game that does not convince ❯

add a comment of Review Imperator: Rome - The umpteenth strategy on Rome?