Review Football Manager 2020: I wanna be the very best!

Football Manager 2020, the most played football management game ever, landed on all platforms last November 19th while, for the Nintendo Switch version, we will have to wait a little longer. We at techigames have tested the PC version for you

Our impressions on this new chapter by Sports Interactive and SEGA were all in all positive. Between new features and improvements, Football Manager has been renewed since last year, and the first season of the league has flown away in the blink of an eye. Ready to know the details of our experience on the Cosenza bench?

Let's start with the basics

The first novelty that leaps to our eyes, even before turning on the console, is the packaging of the physical copies of FM20. This year, to take part in the battle against plastic, Sports Interactive and SEGA have opted for a cover of the game in cardboard. This first novelty actually has nothing to do with the game itself, but in any case it remains a pleasant gem even for eco-friendly users.

Once the game is started, the main screen remains unchanged. As always we will be asked to create our own manager for a new career, both physically and in profile. Among the customization choices we find no particular news, and the types of coaches to choose from remain unchanged compared to previous years. The facial recognition mode, which allows us to set our avatar's face based on a photo of us, could work definitely better. In most cases it is quite difficult to create a trainer that doesn't actually look like a creature out of the world of Doctor Who.

After that, it will be possible to choose between game modes, including the one that allows us to play against friends (online) or against the AI. Here we find a nice feature, which allows us to play against Youtubers and characters of computer-controlled entertainment, including also Robbie Williams. All in all, nothing revolutionary, being a game like the ones we face in Career mode, but it can be fun to play a single game in your spare time.

Having created our character, therefore, we are ready to start our first experience on the bench of a new club. We have chosen to start from Serie B and try the climb up to promotion to Serie A, at the helm of Cosenza. 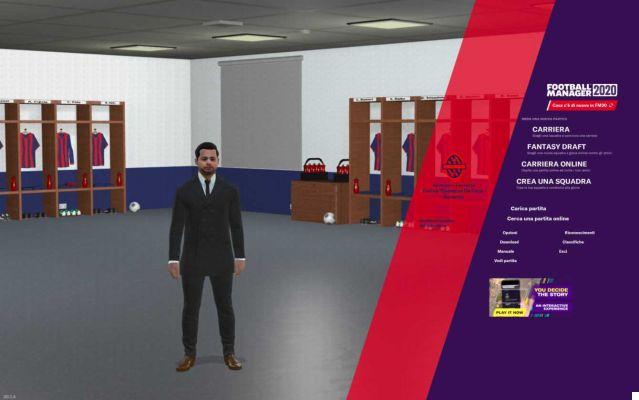 The management of the club - Review Football Manager 2020

Accepted the assignment on the new bench, we find the usual welcome rituals, presentation of the team and anything else that we have already encountered in the previous chapters. After that, we are ready to get to the heart of the career. Already from the first hours of the game it is possible to notice how this year Sports Interactive has wanted to set up a game a "long term".

The introduction of the system of corporate vision, freshens up an otherwise hackneyed club management mechanic. This year, in fact, the management of the team will analyze our work more in depth, based on the real philosophy of the club and the personal characteristics of our coach. Realistically, some teams pay particular attention to the development of the vivavio, others to economic management and turnover, and still others to the team's approach on the field.

All of this will keep the players engaged not only in managing the team on the pitch and during transfer sessions, but also in cultivating the relations with management. Our work will be periodically evaluated based on various factors and sometimes we will be led to "Please" the presidentif necessary. The management will update us through votes from 1 to 10, expressing their satisfaction or disappointment with our work.


The transfer market question remains almost unchanged compared to previous years, and now more than ever our experience in the world of Football Manager will be decisive. The system of interaction with the clubs, with the players' agents and then with the players themselves becomes more and more complex and articulated, and for the newcomers to the game concluding a negotiation could result a real challenge.

Even for the most experienced players it is often not easy to satisfy the requests of the interested parties, and we could find ourselves faced with decidedly exaggerated counter-proposals, expensive clauses and technical counterparts. definitely unrealistic. 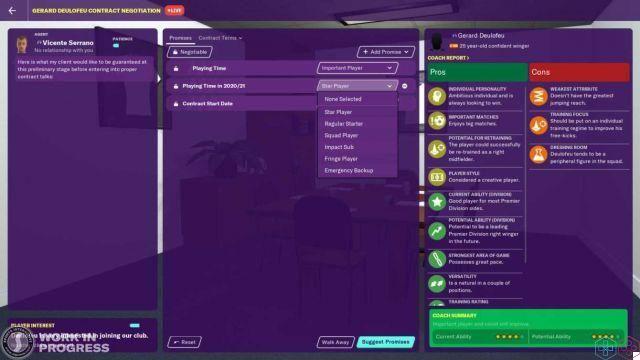 This year between the variety of interactions added, some fixes to the notification system and the introduction of social networks (to Twitter, so to speak), the off-pitch experience flows more pleasantly. Among the comments of the pundits, the statements and rumors from the world of football, the experience is enriched with one pleasant note of realism.

The only demerit goes to the question of "interaction with journalists". The interactions remain the same as always, the questions as well, and the possibility of sending the assistant coach in our place is the only way out of these interludes. boring and already seen in the years. Despite this, this year a kind of anticipation on what the topics of the interview could be introduced have been introduced, which helps the players on what to do. A targeted choice, of course, to help users decide whether to sit in front of the press microphones or send the historic talking goat.

In addition, all market movements of the observed teams, market indiscretions and any "complaints" by players neglected due to technical choice, failure to sell and any other discontent, are notified in the home of the game. This sometimes makes the long notifications section and boring to scroll through, having to interact individually with unhappy players to calm them down and prevent them from negatively affecting our work.

As for the matches, things have definitely improved this year. The historical defects of the series have been reviewed and corrected by the development team. The number of injuries have been reduced compared to previous years and are now average, as is the number of complaints. The only note of demerit in this regard lies in the licenses. As of 2020, many teams have not granted licenses for the game. For example, Juventus fans will be forced to direct the “Zebre”, or those of Chelsea won't neither scudetto, nor real uniforms.

Regarding playability, this year Sports Interactive seems to have drastically decreased the amount of complaints from players about the performance of the team, the decisions made or the management of the dressing room. In addition, the ethical code, which players must undergo. If before we could decide whether or not to give fines to the players, this year they are awarded automatically by management.

As for the team management interface, things have more or less remained unchanged. Merit notes for the introduction of the Development Center, which turns out to be a useful reorganization of features already present. This actually improves some functions that have appeared in the past years hidden and cumbersome.

The graphics of the matches keep getting better and the graphics engine is smoother and more detailed than last year. The quality and variety of animations has definitely improved, and games are also enjoyable at normal speed. In addition, dynamic weather affects both aesthetically and the games themselves, often leading us to change strategy. 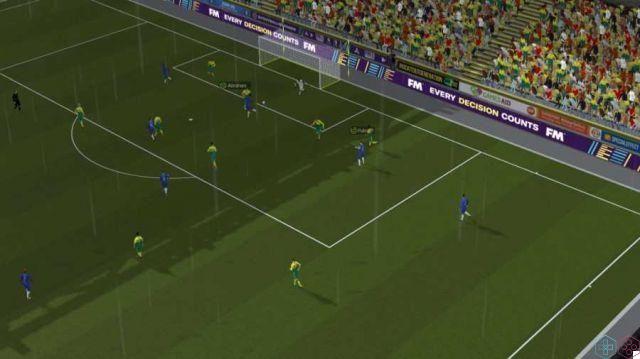 There is actually something to be said about tactics and strategy. The team's ability to adapt to a particular pattern, it can be a problem when we find ourselves changing. In fact, by changing the form or setting of the match, players will find themselves so "confused" as to make blunders and misinterpret our directives. It often happens to set up a style of short passes or an offside tactic in transition, which players then they will not effect.

The numerous unlikely game changes and bad movements of the defenders should also be corrected, as well as the errors from the spot. Also, match results can sometimes turn out slightly unrealistic, passing between one day and the other from a 6-0 win to a 3-0 defeat for no apparent reason.

In any case, knowing the good work of Sports Interactive, we are confident in a resolutive patch from the development team already in the near future. It must be said that even in past years, at launch, Football Manager suffered from similar technical problems which were then promptly fixed by the developers, quindi don’t worry. 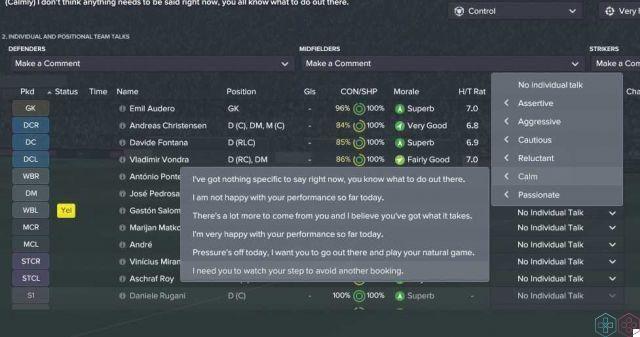 Then? Have you already won the Champions League?

Well coaches, if you have already raised the cup with big ears, then all these things that we have told you about already you know. In conclusion, despite its imperfections, Football Manager 2020 is undoubtedly enjoyable and engaging like every year, for some years now. The greater realistic nature of the simulations, the updated negotiation system and the tactical changes during the game, keep users constantly focused on the game. In addition, the loading times are significantly shorter, which makes the flow of the days less heavy. Recommended? For football lovers obviously yes, whether they are newbies or veterans of the title.

For more news on Football Manager, the world of video games and much more, stay tuned to the pages of techigames.

add a comment of Review Football Manager 2020: I wanna be the very best!