Review Ary and the Secret of Seasons: four turbulent seasons

Let's find out in this review, where the adventures of Ary and the Secret of Seasons will take us. The Evil Wizard looms over Yule

In the videogame panorama there are many who try to evoke the same emotions and sense of adventure that The Legend of Zelda knows how to convey. A mix of features that are not easy to balance: numerous secrets, useful tools to be exploited properly, complex but not too complex puzzles and a light and engaging storyline. Just getting close to perfect balance is a great achievement and today's game has tried to do just that, but with some difficulties. In this review we will analyze the new one Ary and the Secret of Seasons in versione PC, developed by eXiin and Fishing Cactus.

According to the video history on the developer channel, work on this video game began at least four years ago. The initial appearance was probably that of a video game intended for the mobile market, given the polygonal graphics and interface typical of these platforms. Over the years, the video game has evolved intoepic adventure in the third person of today, an evolution that marks an increase in ambitions.

However, from this transformation, the passion infused by developers and their attachment to the character of Ary. This slightly subjective premise serves to throw a less negative light on all the problems that weighed in the evaluation of this video game. Unfortunately indeed the first headaches of Ary and the Secret of Seasons start right from the plot, let's find out in this review. 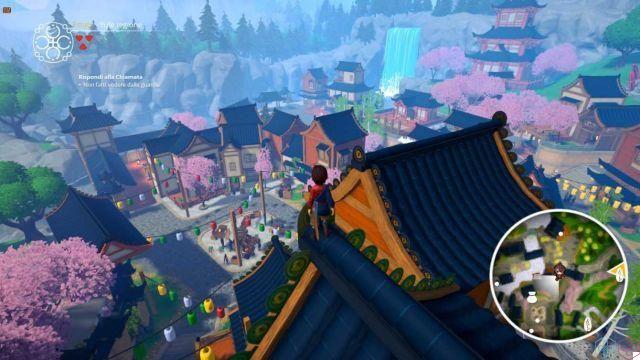 Aryelle, commonly called Ary, is a little girl who lives in the winter village Yule. His father is the keeper of the cold season, but recently, given the loss of his son, he entered a deep depression that deprived him of speech. His role as a defender was therefore lost and the protection of the kingdom was therefore weakened. This allowed red crystals to fall from the sky and put the atmospheric agents into complete turmoil.


Now in Yule it is terribly hot in summer and the evil hyenas have introduced themselves, creating many problems. Ary then decides to take matters into her own hands, stealing her father's winter jewel and following in her brother's footsteps by aspiring to the role of legendary warrior. By attending the meeting of the guardians of the seasons we discover that everything the world is in danger because of the Evil Wizard (yes, that's his name).

This is an interesting introduction, which aims at a light narrative style, similar to that of cartoons. However, the script-level execution is watering on all sides. Among the major problems there is a main focus without bite, the story develops by inertia and finds a completely disappointing evolution in the ending. Writing the dialogues is part of this problem. Sometimes pleasant and well structured, others instead seem trivial lists of information. The very faulty translation could also be guilty, which at times seems to have been translated by Google Translate. There is a desire to be original, but often through the banal clichés of the adventure genre. 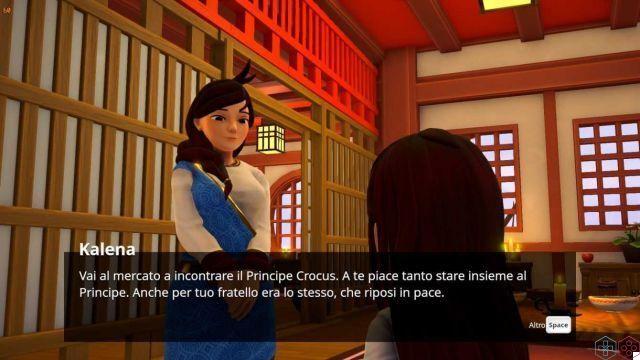 Gameplay accattivante – Review Ary and the Secret of Seasons

From the previous paragraphs it is quite clear what our opinion on the plot is, but it is different on the gameplay. Ary is the lively protagonist of the game, full of desire to explore and get stronger and stronger. This will lead her to visit the four regions of the world, each characterized by different atmospheric agents. To explore it we are equipped with a sword and a remarkable jumping ability. With the attack button we can perform a simple combo and pressing Y at the right moment will counterattack.


Nothing complicated, which makes the commands easy to master right from the start. There is also a sort of automatic lock-on (or Z-targeting for connoisseurs) which however very often made us lose control of the character during the fights, so we recommend disabling it from the menu. pleasant and make us curious about what we can do next. In fact, there are often unreachable places, which they will require the use of skills and tools, obtainable at a later time. Curiosity that will bring Ary to the main towns of the game which, although pleasing to the eye, are inhabited by characters all the same.

There is indeed one lacking variety of models and their dialogues do not help to characterize them better. In addition, many of them will offer us secondary missions that often consist in obtaining hidden objects, to get new items as a reward to customize the protagonist. In the game you can in fact change Ary's headdress and costume: from a bullfighter, from oriental training, a royal wig and many others. 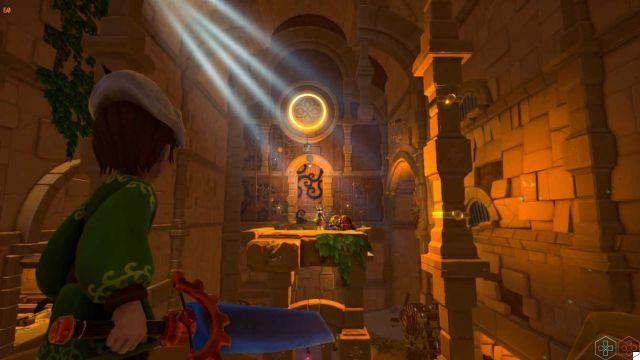 Once Upon a Time - Review Ary and the Secret of Seasons

Only after gaining possession of the powers of the seasons, and it will take at least 4 or 5 hours, does Ary and the Secret of Seasons show its full potential. The spheres of summer, winter, autumn and spring will allow us to create zones of influence at will, with which to interact with the surrounding world and solve puzzles. The power of winter can generate snowy areas, freezing water surfaces and create blocks of ice; or spring creates climbing walls inside and dry the water basins.

The combined use of all four powers is well exploited within the game, while remaining within strict rules that must be learned for the most part independently. One puzzle, for example, involved infusing spring energy into a stone ball. By dragging the boulder we had created a mobile spring area, which allowed us to easily cross a stream and create a path of vines under our feet.

While the game world offers several puzzles to get money and collectibles, most of the time we will make the best use of them within the underground, just like in Zelda. 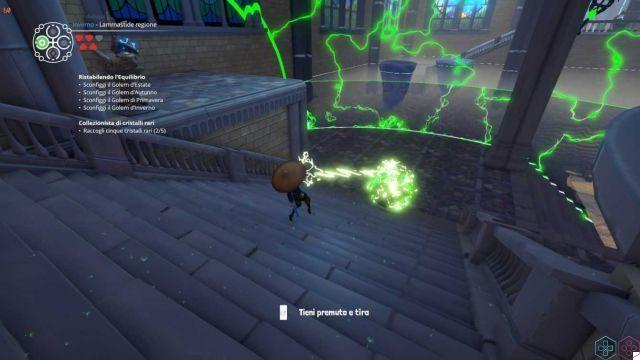 It goes underground - Review Ary and the Secret of Seasons

To be able to overcome them it will in fact be necessary to use a little ingenuity, enough not to frustrate the player or block him for too long. It will also be present a strong platform component, all the more so as to resemble a Darksiders 2 game for novices. Sections that require a good reactivity of the commands, which, however, has not always been present. In fact, Ary sometimes has difficulty clinging to ledges or activating the animation to pull himself up.

Although the dungeons are well done, it is a pity that their structure is very linear and not very interconnected. Also in case you want to go back to explore them to do some completeness, not all puzzles will be completed by the last game session. Some do, some don't. Finally when you have reached the end of the dungeon, you will have to challenge the boss. Each will have their own specific challenge, which will rely on different styles of gameplay: on jumps, puzzles, puzzles and more. Only one disappointed us very much and consisted of several hordes of hyenas already seen throughout the game. 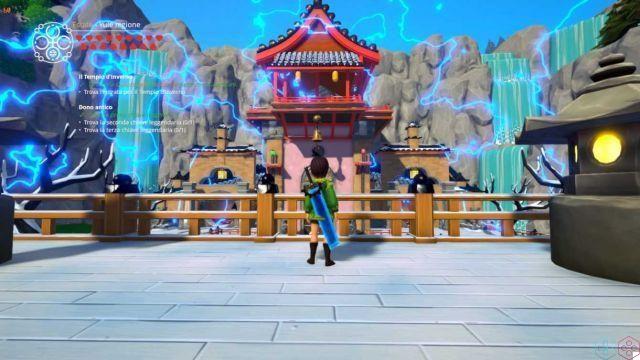 So many technical problems - Review Ary and the Secret of Seasons

Being able to jump around and explore quite freely in the various play areas, it was easy to stumble upon some purely technical defects. We are talking about real holes in the map in which it is possible to fall and pass under the textures, or other times pieces of terrain were missing where even the underworld of the polygons was only visible. In addition, in the review before the release of Ary and the Secret of Seasons, we encountered numerous bugs: custom outfit disappearing, sporadic absence of music, graphic artifacts, incorrect positioning of some models and other small and big problems.

However, they can often be solved with a simple restart of the game. We talked to the developers on this, who proved to be very open and willing to help us. After a decent bug report, we were reassured that when the title came out a patch will be released to fix most of our problems. It is also necessary to point out that no problem has ever blocked progress in the game. 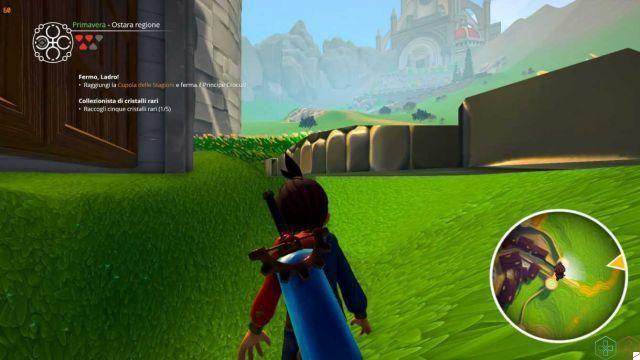 Just don't shop around - Review Ary and the Secret of Seasons

Aesthetically, however, it has its ups and downs. Some areas of the game show excellent care in its overall composition. The initial area is very pleasing to the eye, like most of the undergrounds and everything on the main road that must necessarily be covered. However, turning the camera and exploring the most hidden places the polygons do bad interpenetrations and other locations are just deserted.

The models, as mentioned above, are very generic and often repeat themselves. Problem that monsters also have, they are in fact the same about 6 or 7 similar monsters, which are repeated throughout the game. This greatly flattens the aesthetics and also the variety of the clashes. But it is gods who give us life well done animations, especially if we consider those of the scripted scenes. Very positive note are the music that accompanies us in the adventure. Always pleasant and one of the few elements that manages to give character to otherwise mono-tonal narrative. 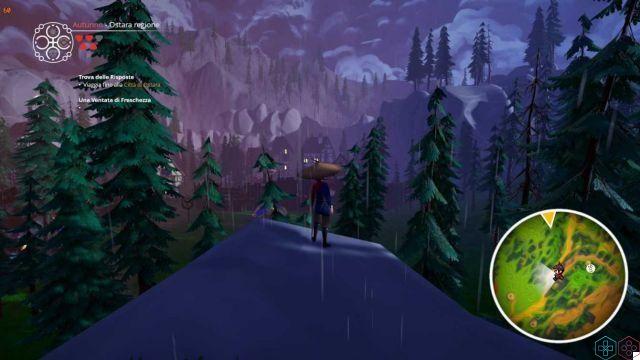 The adventure lived in Ary and the Secret of Seasons has managed to give us hours of carefree fun. Within its various settings we have pleasantly explored and solved puzzles. However, its flaws cannot be ignored, especially if we are talking about one decidedly subdued narrative and sporadic bugs in the PC version. We enjoyed discovering the secrets kept by the map, but in doing so we also observed a lack of care in the secondary areas. We recommend playing it to anyone who is a big fan of the genre, or who is not afraid of falling into some open hole in the ground. After all, just reload the game.

Ary and the Secret of Seasons is now available for PC, PlayStation 4, Xbox One and Nintendo Switch. To stay up to date on video games and technology, we recommend that you continue to follow us on the pages of techigames.

add a comment of Review Ary and the Secret of Seasons: four turbulent seasons