OkunoKA Madness review: a platformer that was needed

A two-dimensional platformer that will test your skills. Will he be able to convince us? Here is the OkunoKA Madness review

In the videogame panorama there is a large category of products that make their strong point a single aspect, but excellently developed. Smaller projects in terms of size, but ambitious from the point of view of the final realization. Sometimes they struggle to be known by the general public, accustomed to the massive triple A that dominate the market, but it can happen that that single element can resonate in the heads of the players and lead to great success. OkunoKA Madness could easily be one of the latter, let's find out why in our review. 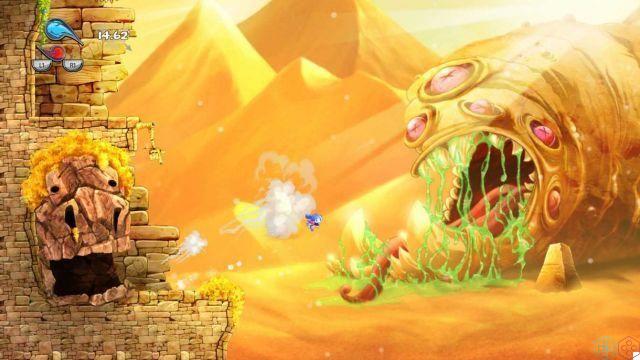 OkunoKA in its best version

The title, developed by the Roman software house Caracal Games and published by Ignition Publishing, is nothing more than a re-edition of OkunoKA, the original first version available only on Nintendo Switch. The Madness version instead is available starting today not only on Nintendo's hybrid console, but also on PC, PS4 and Xbox One. OkunoKA Madness is a revised and improved version of the original, with some additional content that we will go into later in the review.

We are in front of a two-dimensional platform clearly dedicated to a hardcore audience. All that matters are excellent reflexes, which are necessary to overcome the challenges that face us, and nothing else. The plot is rather essential and told briefly by short intermission films between the worlds. We take on the role of KA, a blue sprite who must save the world of souls from the fearsome Os. This is all you need, a context to throw yourself into the numerous increasingly difficult levels that the game puts before us after a few minutes. 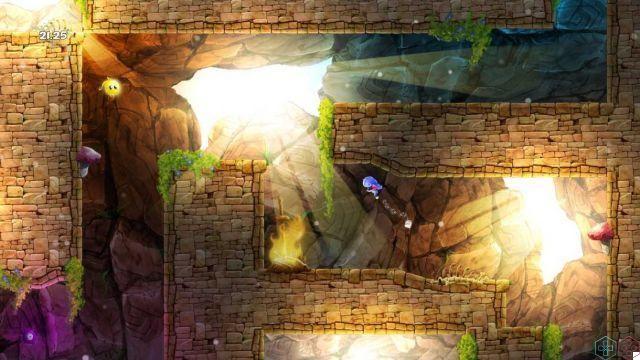 The right inspiration - OkunoKA Madness review: a platformer that was needed

The levels are very short, they won't occupy you on paper more than a few seconds. This of course if you manage to overcome them at the first attempt, which is not at all easy. The gameplay structure is based on a continuous trial and error. If you've played Super Meat Boy it should all be pretty familiar. OkunoKa Madness, however, succeeds in the non-trivial task of taking inspiration from the title of Edmund McMillen, without however being a trivial copy of the latter.

Here too we find the same scheme and a difficulty pushed to the limit, speed runs divided by level and many secrets to unlock. But there are also some "proprietary" mechanics which profoundly alter the gameplay. There aren't a lot of them, but they manage to have a big impact on the experience. We are also talking about a genre that nowadays boasts very few exponents and that OkunoKA Madness manages to represent more than worthily. 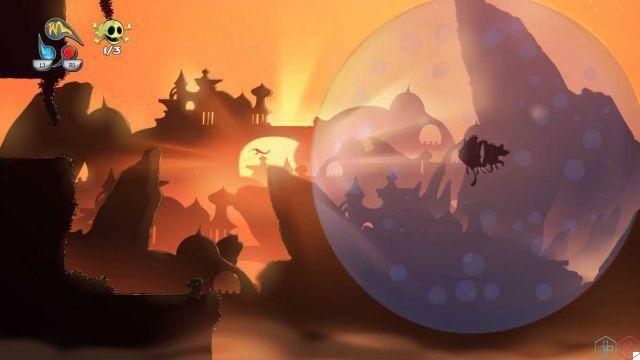 Total Control of the Action - OkunoKA Madness Review: A Platformer That Was Needed

Let's talk about the gameplay and command management. The latter appear to be responsive both in the jump and in the movement and, once familiarized, allow you to control the action with great precision. There are some small flaws, we found some difficulties in managing the race in some points and some small hitbox errors, in particular against the bosses. Nonetheless it's about the details, nothing that in any way affects the enjoyment of a good control system.

One of the mechanics that you unlock as you progress through the levels is the ability to make platforms appear (or disappear). This power completely transforms the gameplay, especially when we have to take advantage of three different types of platforms. The player is therefore required not only lightning fast reflexes, but also good hand-eye coordination. In the advanced levels this transforms almost in some kind of complex fighting game combo to be performed to the millisecond, giving a lot of satisfaction in case of success. 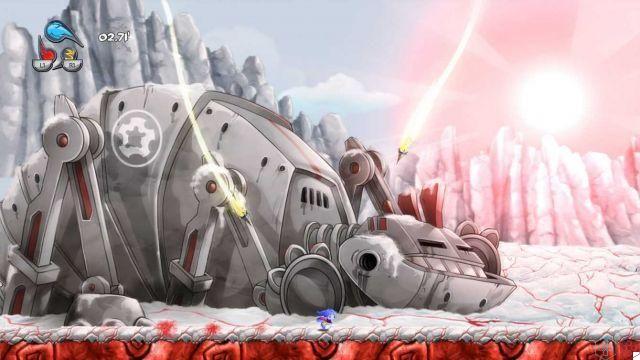 Limiting Times to Perfection - OkunoKA Madness Review: A Platformer That Was Needed

Many of the levels feature a main road, but there are also useful shortcuts to get the best times. OkunoKA Madness is the joy of speedrunners, thanks to the presence of times (with relative degree) at every level, but not only. There is also a "Speed ​​Run" mode, which allows you to compete on individual levels, on an entire world or on a customizable playlist. The scores will then be reported in one global ranking which will showcase the fastest speedrunner.

They think about giving that extra bit of variety the various characters present in the game. Each of them has peculiarities that change the approach to the levels, you go from those able to cling to the walls, to those with a speed higher than the norm, which could help you to complete the game 100%. . OkunoKA Madness has indeed an optimal amount of content, to a good number of levels there is also the possibility of completing by unlocking all the secrets of the game. Considering the introductory price of € 14,99, one cannot fail to be satisfied. 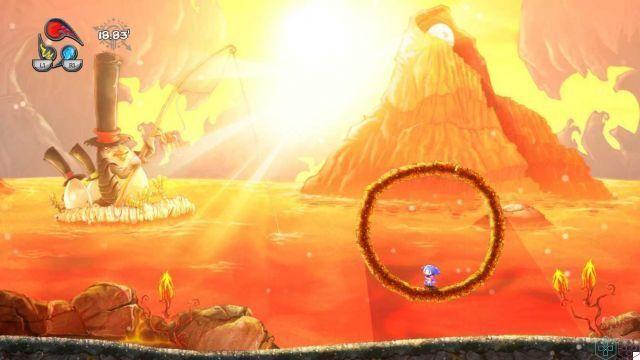 Difficult, but not frustrating - OkunoKA Madness review: a platformer that was needed

A separate mention should be made for the level of difficulty. We have mentioned several times in the reviews that OkunoKA Madness is a title that is aimed at the most hardcore gamers. The levels are really difficult and, as if that weren't enough, in this version there is a new world with 20 incredibly difficult levels to overcome. In any case, the game it hardly ever turns out to be frustrating. The lightning-fast loading after a death doesn't break the rhythm and allows you to try and try again without hesitation.

We have never been faced with levels that rely on luck. Everything is calibrated in terms of coordination and timing, almost like in a kind of rhythm game. The only moments where we have felt a slight feeling of frustration is in the boss phases. Accomplices of the non-exciting patterns and a length much higher than normal levels, bosses may be unwelcome obstacles. 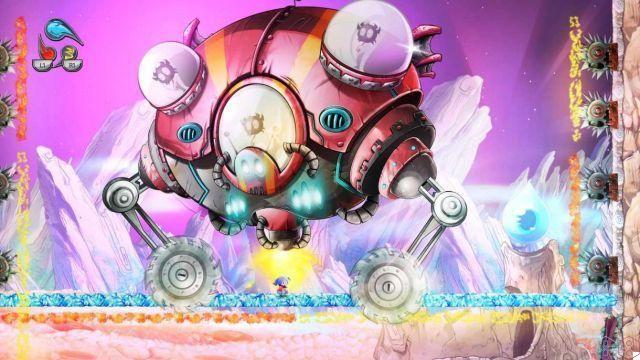 Slight sense of déjà vu - Review OkunoKA Madness: a platformer that was needed

From a technical point of view OkunoKA Madness performs well. The testing ground for this review was the base version of PS4. We also point out the absence of frame drops or input lag to the quick uploads mentioned above. The art design turns out to be pleasant, even if without particular peaks. It is felt from the outset that the guys from Caracal Games have taken inspiration from Rayman's style for the characterization of the game world. However, we specify that OkunoKA Madness does not have much else to share with the Ubisoft saga other than a slight inspiration.

As mentioned, the game is essential and focuses solely on the success of a satisfying hardcore gameplay. The soundtrack also fits this philosophy, classic and that accompanies the player in what will be a challenge able to test his skills. Finally we point out the presence of texts completely in Spanish. 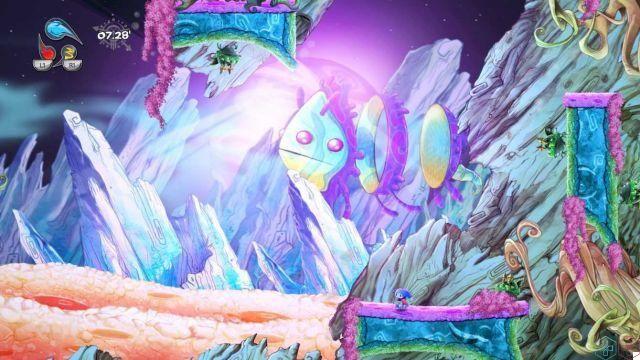 OkunoKA Madness is a very successful title, which does not make the mistake of being too ambitious and hit the target of making a hardcore 2D platformer in the best possible way. We highly recommend it to all fans of the genre who have been looking for a challenge of this kind for too long. Furthermore we also suggest to those who are not familiar with the genre of give it a chance, also given the very low launch price.

We will have to keep an eye on a talented team like Caracal Games that manages to pack a good product already in their second experience. Sure, OkunoKA Madness picks up a lot from well-known titles, like Super Meat Boy for the levels or Rayman for the art style, but he is not afraid to propose new mechanics that give the game its own identity.

Our okunoKA Madness review ends here, keep following us on the techigames pages to stay up to date on all the news from the world of video games and more!

add a comment of OkunoKA Madness review: a platformer that was needed