Omega Strike is a classic pixel art metroidvania developed by Woblyware which, while not innovating, is solid and fun

Omega Strike it's a metroidvania 2D horizontal scrolling developed by Woblyware in pixel art. The title, initially distributed on the PC via the Steam platform, has recently also arrived on the Nintendo Switch and it is this latest version that we have tried to review.

The plot is little more than a pretext to kick off the real action. A scientist named Omega has created an elixir capable of amplifying the capabilities of soldiers and the military leaders have well thought of administering it to most of the armed forces. Soon after, the soldiers began to transform into mutants under the control of Doctor Omega and, thanks to these overwhelming forces, the mad scientist quickly gained control of the world, which he now dominates from his flying fortress. Only a small number of rebels still oppose the mad doctor.

Omega Strike is a pretty classic metroidvania to be honest. In fact, the game is based on the classic and tried-and-tested formula of exploration, unlocking new skills following the killing of bosses and consequent ability to reach new areas. The small note of originality offered by Omega Strike consists in having it at our disposal 3 playable characters and to be able to exchange them in total autonomy, always taking advantage of the one whose skills are best suited at the moment.

The three alter-egos that the player can play in Omega Strike are called Sarge, Bear and Dex. Each of these characters has unique abilities, which will be further expanded over the course of the adventure. Sarge he has a machine gun as his weapon, which has the highest rate of fire and range of the trio. Gradually our Sarge will also learn to roll, cling to pipes and destroy small rock barriers. Bear it is, as its name suggests, the strongest and by virtue of this it can move boulders. Later he will also learn how to place explosives to open up new avenues. The shots from his weapon are directed downwards and are also capable of bouncing. Finally we have Dex, who is armed with a powerful shotgun whose range is rather short. Dex can double jump and will also unlock the ability to sprint. Understanding when to switch from one character to another is crucial in Omega strike: choosing the right character will make it much easier for us to progress in the exploratory phases and also the battles against the bosses. 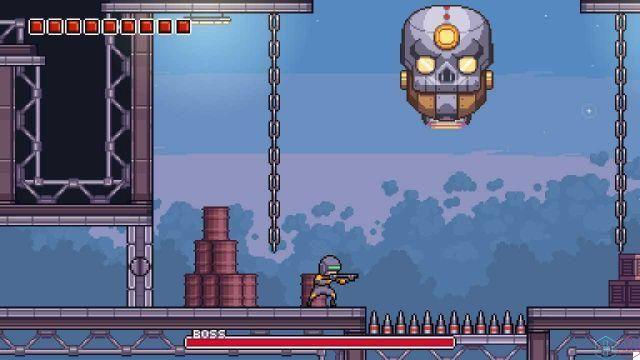 The game offers eight explorable areas and a good number of bosses. There are 3 types of hidden objects in the zones: chests that offer coins, medkits and life cubes. The gold coins can be used to buy upgrades of our armamentarium (amount of damage and range), heals or items that allow us to instantly return to the base. Life cubes can be traded for an increase in maximum health instead. While not upsetting the classic metroidvania formula, Omega Strike manages to offer a sufficiently varied gameplay, thanks to the three characters, solid e funny.

As for the technical side, we have very little to complain to the guys at Woblyware. Omega Strike runs great on Switch: both in portable mode and in docked mode we have never detected any type of graphic defect or slowdown. From the artistic point of view, the pixel art used is pleasant without striking in a particular way. Absolutely adequate the sound that offers catchy music that winks at the past of the genre.

The longevity of the title is also good which, based on how much you decide to fully explore the areas, will stand between 6 and 8 hours. It should be noted that the difficulty of some bosses seemed to us to be calibrated a little too low when playing at the normal level (things change significantly to difficult). The overall challenge level of the title results instead absolutely adequate. 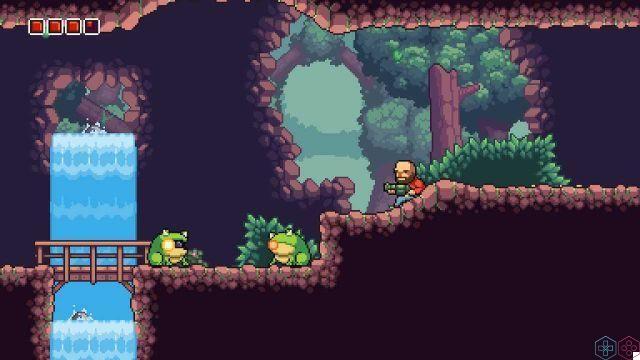 Omega Strike: metroidvania as they once did | Review

Ultimately Omega Strike is a game that convinced us, satisfied and amused, leaving us the desire for a second run after reaching the end credits. The title is a rather classic metroidvania, which certainly does not innovate the genre and does not offer a particularly refined artistic side, but is based on an absolutely solid and well-thought-out gameplay that is never boring ... and this by far the most important thing for a title like this. Promoted.

And what do you think of Omega Strike? Let us know in the comments and don't forget to keep following our section dedicated to videogames.