LEGO The Incredibles gives us a taste of the next film dedicated to the Parr family, the Incredibles 2, arriving in the best cinemas from next September. Have Warner Bros and TT Games changed the game formula of their titles or are they continuing on the same line as always? We're about to find out

You like movies Pixar? If the answer is no, we are not very sure if you are a good person: beyond the obvious ups and downs of recent years, the animation company, now owned by Disney, has produced real masterpieces, some of which have marked the childhood also of the editors of techigames. The Incredibles, a "normal" family of superheroes, for example, made their debut in the best cinemas 14 years ago, in 2004, completely rewriting the genre and atmosphere of the films in the sector. Those were the times when Marvel had not yet taken the field with its cinecomics, but even now that it is competing with DC for superhero cinema The Incredibles are ready to return. To prepare us and allow us to pass the wait, TT Games and Warner Bros. Studio thought well that there was enough room for yet another licensed LEGO title. And here we are, talking to you about LEGO The Incredibles in its console version.

Let's start immediately with a premise that will find its reasons in the course of the review, up to the concluding paragraph: i LEGO titles they are fun, they are suitable for all ages with a predilection for the little ones, but over the years they have also proved quite repetitive: perhaps it is also for those who come out of them in the short term that it is difficult to grasp (when present) the small evolutions and you find them original. With LEGO The Incredibles TT Games and Warner Bros have clearly opted for the easy way: use everything we've seen in recent years by simply changing the license, context and characters. LEGO The Incredibles thus turns out to be a pleasant title in itself, but a chapter of the LEGO series entirely identical to the previous ones.


Is it bad or good? It probably depends on your point of view. It has certainly surprised us, unfortunately not in a positive way, the director's decision about the storytelling of the game: LEGO The Incredibles faithfully follows the plot of the first and second films, but reversing their order and playing with the situations of both. This is not a completely new strategy either, paradoxically it has been fished out of the past even if it is very questionable: first you have to play the plot of the second film, then that of the first. On balance this does not make any sense, because the player who buys the title to enjoy the adventures of the first feature film of 2004 will be forced to spoil the adventure in advance that awaits him at the cinema from this September. 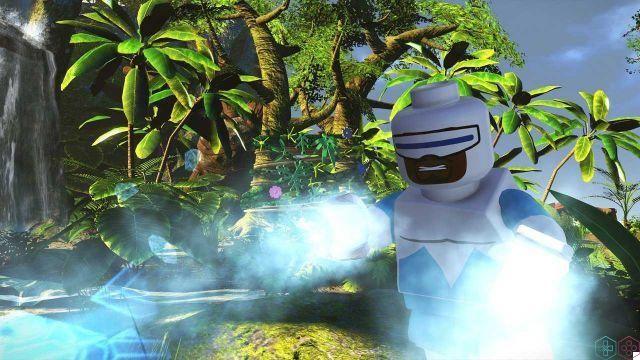 Let's think for a moment: The Incredibles 2, the new film, is already available in America, but not in our country. Therefore, publishing a video game that tells in advance everything present in the second feature film of the series, and that forces you to play it well before its arrival in theaters, is not exactly a brilliant choice. It would still have been understandable if the chronological sequence respected the time of the linear narrative: the first film, therefore the second; but so there is little to do, to play at LEGO The Incredibles the new film is completely spoiled, and many greetings.

On the other hand, the usual situations proposed by LEGO titles are successful and fun: both films have been interpreted in a comic and humorous key within LEGO The Incredibles, exploiting where possible the funniest descents of both films of the franchise. It is, we want to reiterate, a title really suitable for everyone and that allows parents and children to play together thanks to a pleasant multiplayer mode locally.

You don't change the winning team, and neither do the LEGO titles: LEGO The Incredibles proposes the same mechanics, the same basic ideas and the same gameplay solutions of all the most recent titles in the series, from LEGO Marvel Super Heroes 2 to LEGO Jurassic World, passing through all the endless licenses acquired over the years. So here we are again in a fairly vast open-world although not very detailed, with side missions to complete and chapters of the main plot to complete, then later replayable in free mode using all the LEGO characters accumulated in our collection. 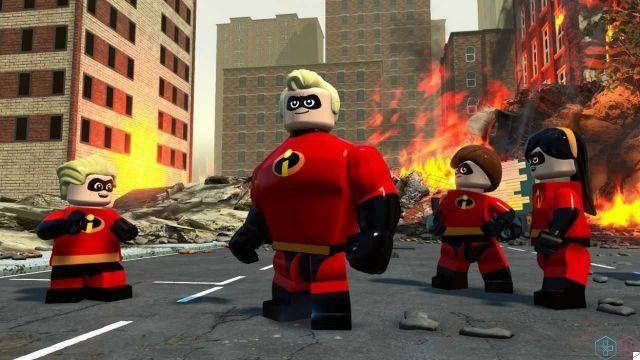 I levels they are also quite linear, and propose small environmental puzzles along the way that will surely make the little ones happy, but that from eleven years upwards will no longer have any level of challenge to offer. Each character of the Parr family is naturally usable during the game phases, and each of them has his superpower at his disposal: Mr Incredible is very strong and destroys the elements of the scenario only by touching them, but if it comes to getting to a point too high o crossing a narrow duct will rather need Elastigirl's flexibility; and then there are Violetta with psychic powers, the lightning-fast Flash and little Jack Jack with a mix of weird but incredibly valid abilities in time of need.

Of course, there is no shortage of lots of collectibles that will force the completists to repeat each level of the game at least twice, allowing them to accumulate trophies, alternative skins for the protagonists and even real cameos from other Pixar films, including Dory from the recent film Finding Dory; the local multiplayer mode, as mentioned, guarantees a few hours of serenity with family and friends, always of course that you are satisfied with a linear challenge, and even if pleasant it is also rather monotonous. Sooner or later, however, we are sure that Warner Bros. will amaze us positively by returning to the open path with LEGO Worlds and then abandoned. Pleasant, detailed and satisfactorily curated is also the graphics of the game, which can count on the usual charisma of the artistic sector of the LEGO series titles.

LEGO The Incredibles is a normal title in the LEGO series, in line with what has been seen in recent years: a linear and simple narrative to complete is accompanied by an equally basic gameplay based on action clashes, in which just push the same button all infinite, and simple but nice environmental puzzles. There are many game elements to unlock and see, a lot of characters to play with, and also the possibility of playing in the company of a friend: the little ones are certainly the most suitable target, adults will probably not hold more than one couple of hours, mainly due to the repetitiveness of the game mechanics.

6.8 The perfect title for the whole family!

add a comment of LEGO The Incredibles Review: Super Builds Are Coming