Hades review: a journey between the perfect and the divine

Let's find out together, in our review, how much Hades, a newcomer among the Supergiant Games pearls, actually approaches the definition of "perfection"

"Perfection". There is no point in trying to deny it: there are video games, films, TV series or books that, in their genre, can be assimilated to the concept of "perfection". However, we must not think that something "perfect" is universally so. Every judgment on a product, and this is true both for the videogame industry and for any other entertainment medium, must be related to the circumstances and context in which that product was born. Precisely for this reason it is almost always useless to look at the vote of a review without reading the text. Numbers are just numbers, and often something excellent is hidden behind a not "perfect" grade. Perfection is not a number, perfection is contextual.

Supergiant Games is a small American company, born in 2009, which has been able to make people talk about itself with enthusiastic tones since 2010. In this now distant year, in fact, their first small masterpiece, Bastion, arrived on the market, which made the public fall in love and prints in the same way, taking it to the Olympus of titles that no one should dodge in the course of their "videogame career". However, we are not here to make an excursus of the history of Supergiant Games, for that there will be suitable times and places. We talked about “perfection” at the beginning and that's enough to introduce the protagonist of this long article: welcome to our review of Hades.

A name, a guarantee

Hades is the latest effort by the small Californian company, already nominated as game of the year at The Game Awards 2020, released for some time now on PC and Nintendo Switch after almost two years of early access on Steam. This definitive version is not just a re-edition in premium format to bring the title also on consoles, but it adds fixes, adjustments and new contents to the version that we have been able to appreciate over the last few years. Hades is an isometric roguelite third-person action that collects all the frenzy and dazzling skill of Supergiant Games in knowing how to tell stories, to mix it all with fast and rewarding gameplay. Let's go step by step. 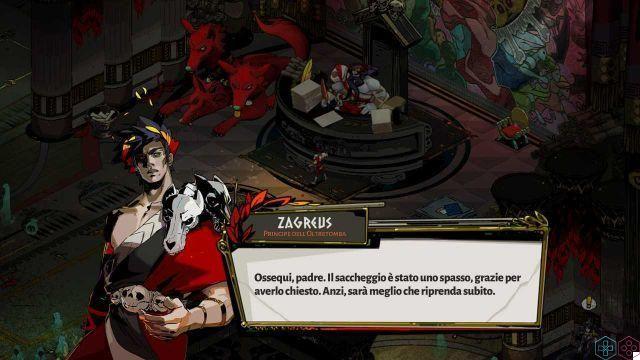 We find ourselves in the role of Zagreus, certainly not the very famous son of Hades, a young man who in the first instances of the game discovers that his mother is not actually Nyx, as he has always believed. Rebellious from an early age, in strong contrast with his father, but with the favor of anyone else who peoples the afterlife, Zagreus decides to try to escape from Hades to the surface, in search of his lost mother and the much desired freedom. You will understand well, therefore, how the roguelite component inexorably intersects with our protagonist's attempts to escape from the Underworld. At each death we will find ourselves in the presence of our Father, mocking and unshakable in his convictions, and of all those whom we will learn to know and appreciate in the course of our adventures.

Pelide Achille, friend and teacher. Thanathos God of Death and best friend of Zagreus. Nyx who, although not a blood mother, has a delicate and maternal attitude and aura. And then Cerberus, the fearsome infernal hound who bends to the cuddles of the owner. Orpheus, Megera and many others will come to populate an increasingly busy afterlife and will bring with them knowledge, insights and new relationships to be woven for a Zagreus that will grow with each death and each new attempt. 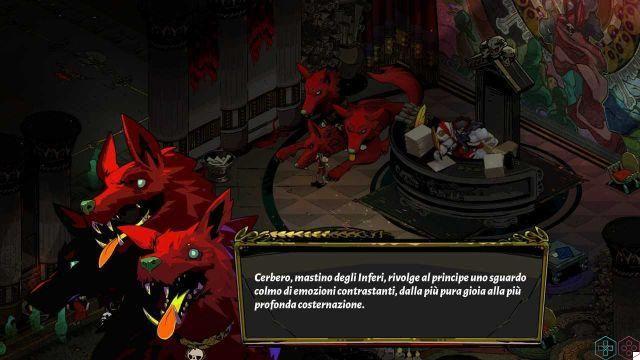 The narrative, although fragmented, flows linear and interesting. Each interaction with each character will bring a new plot piece or an additional notion that will deepen Zagreus in his relationships. All masterfully punctuated by perfect dialogues both in writing, always bright and lively, never excessive, and by a practically perfect dubbing. A praise also to the Spanish localization, which has managed to make every joke and every double meaning very well, without any smudging whatsoever.


Each Zagreus escape attempt will begin with the choice of the infernal weapon from a total of eight, although there are later variants that can be unlocked over the course of the games. There is no better weapon than the others, but the advice is to try them all and choose the most suitable for you to get to the top of the climb. Having chosen his travel companion, Zagreus will join the fray starting from Tartarus for a total of four total maps. Our protagonist will be able to strengthen himself during the climb thanks to the Gifts of the Gods of Olympus, who seem to want to support the boy, and which will allow him to build a real Build. 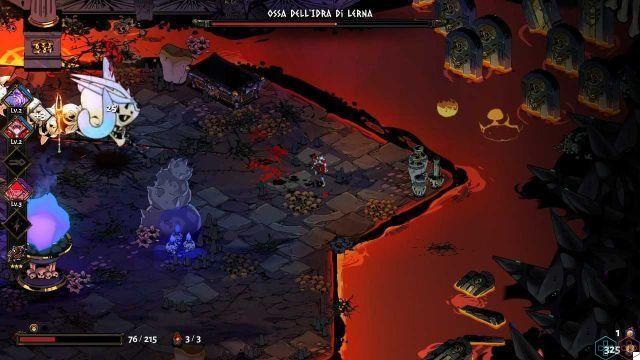 Each God will have its own peculiarities and will guarantee different effects based on the mythological facts referring to him. Dionisio, for example, will guarantee attacks that inflict the “Hangover” status, Hermes will be more speed-oriented and Zeus will give us his Lightning Bolt. All of which can be mixed at will and based on what the RNG will decide to grant us to each run, giving that tireless flavor of novelty to each new Escape. In fact, although the total maps are only four, the huge amount of secondary events, items, Gifts, NPCs and challenges ensures a practically infinite longevity. Just as expected from a roguelite.

Disarming peculiarity of Hades is knowing how to throw the player into the fray without giving any input or initial tutorial. Although it may be confusing for non-fans of the genre, you will almost immediately understand how intuitive the Supergiant Games title can be. Of course, as with any self-respecting roguelite, the saying goes “Easy to learn, hard to master” and it will take several hours alongside Zagreus to memorize each room and each effect. The enormous sense of satisfaction at each victory and, why not, also at each fruitful defeat, if only in terms of the materials that are brought back to Hades, is addictive. 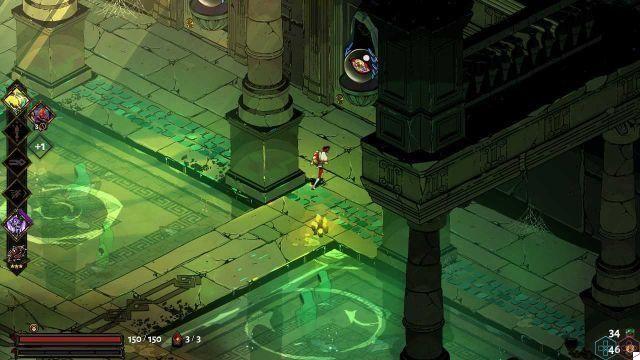 At its core, Hades respects the hack'n'slash archetype in isometric view: to each weapon a key for the primary attack, one for the special one, one for the roll and one for the throwing of objects. We will then be able to take advantage of the backbones for powerful divine evocations, usable after filling the appropriate bar that will appear once the specific Gift has been accepted, and the interaction with the surrounding game world, full of challenges and secrets.

Any Escape Attempt will not be useless, on the contrary. There are many new features to unlock in the Underworld for which you will need a huge amount of materials, gradually more and more rare. And if many of these innovations seem useless at first, as the hours go by you will realize that nothing is actually useless in Hades. At least, each run will lead you to learn more about the game, to better understand the mechanics and to unlock that extra skill that will take you one step closer to the exit. 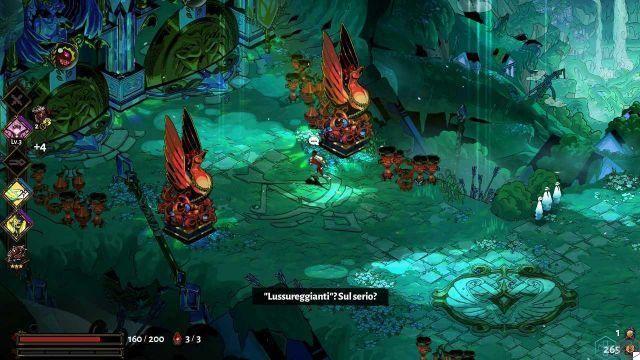 Oh my, how nice! - Hades review

Artistically speaking, the guys at Supergiant Games, in particular the Artistic Director Jen Zee, have far surpassed themselves. The pop reinterpretation of the various Divinities is very impressive, with a bewitching character design full of originality. The dialogues, which showcase the comic sprites of the various NPCs, are too short to be able to fully enjoy all the details. A praise also to the settings which, thanks to the skilful use of chiaroscuro and ever-changing and never banal color palettes, give breathtaking views. A living art exhibition, our Hades.

If we really have to find an artistic flaw in the work of Supergiant Games it is the soundtrack. Mind you, we are still on very high levels, with spectacular tracks and who know how to stay in the lead for days. Wanting to be picky and nitpicking, however, in the case of Hades it seemed to us that the soundtrack is slightly lower than the other Supergiant productions. Perhaps less impactful, less eye-catching than Bastion and Transistor, in short, but still of an excellent quality. 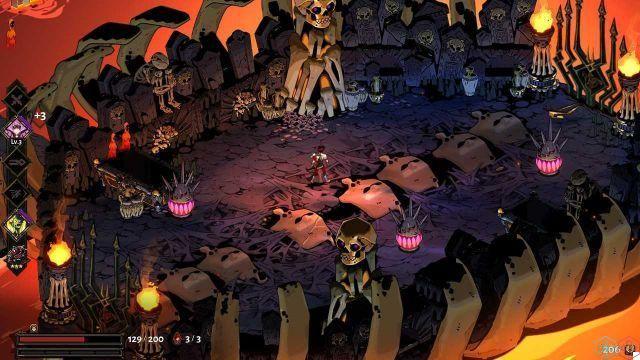 Our test of Hades took place on Nintendo Switch. Technically speaking, the Supergiant Games title performs very well on the small hybrid of the great N. We admit, however, the paradoxical better performance in portable mode, rather than in dock. In fact, in portability Hades runs at a native 720p resolution, with a frame rate that stands at a fairly stable 30fps, which only drops slightly in the most agitated situations without giving too much annoyance. Moving to the dock, on the other hand, the graphic upscaling does not improve the general visual rendering, on the contrary. The image will appear blurrier and less detailed, especially on larger TVs, making everything less sharp and pleasing. 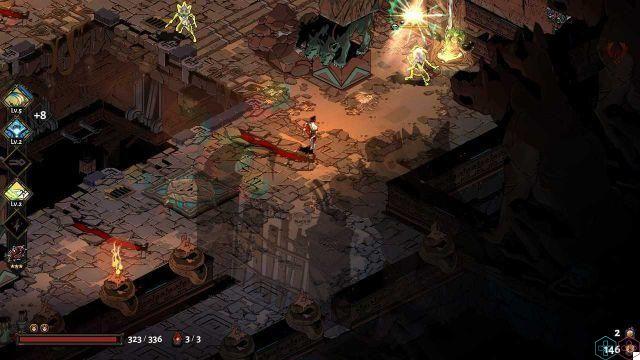 Finally, to end this review of Hades, can we really talk about “perfection” for the Supergiant Games title? We take responsibility to say yes. The game, although not free from minimal technical flaws, has practically put in the oven the recipe for the perfect roguelike. An addictive, intriguing and properly blended mix of technical and precise gameplay, flawless storytelling and a terrific art direction. Hades is the title that will take away several hours of our life and most of our free time, creating a real "addiction".

Is all that glitters really gold? In the case of Hades, definitely yes. And we had no doubts.

add a comment of Hades review: a journey between the perfect and the divine