FutureGrind is an arcade platformer with simple but profound mechanics: let's find out all the details in our review

Milkbag Games is a very small development team made up of just two people, Matt Rix and Owen Goss. If you have never heard of them, you are forgiven. So far, Milkbag Games has only developed small, mostly mobile titles. They return, however, at the beginning of 2019 with a new project that tries to aim a little higher: FutureGrind, disponibile per PC (via Steam e itch.io), PlayStation 4, Xbox One e Nintendo Switch. 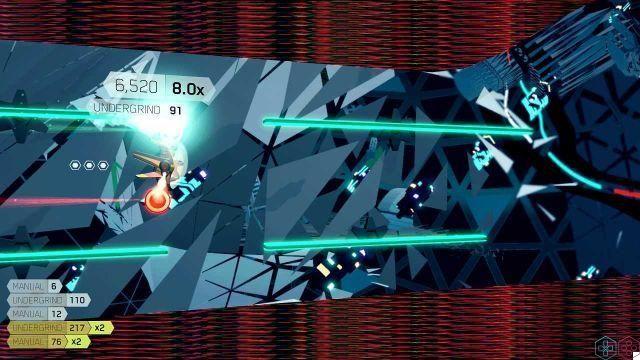 FutureGrind is a high-paced arcade platformer in which we ride a futuristic motorcycle. Our vehicle is able to rotate on itself, directing the two colored wheels in flight. Our aim is to compete, alone, on a course made up of colored surfaces: obviously, the green wheel can only touch the green platforms and the yellow one can only touch the yellow ones (and so on for each color present).

It is a simple idea, but declined in various ways. To start, you don't just have to “grind” over platforms: you can also stick to a surface from below, or you can hang from it. Furthermore, the bikes (except for a specific model) must be kept in balance, as in practice only one wheel can touch the ground at the same time, making us effectively unicycle riders. Finally, you have to do everything quickly, jumping and maybe rotating several times on ourselves to perform tricks and ring combos on combos to hunt for points.

FutureGrind, in fact, is a typically arcade game. The title offers dozens of tracks and each of them, in the first instance, asks us only to get to the end. Climbing the ranks online is optional, but clearly a key part of the overall experience. To unlock new paths, however, it is mandatory to overcome challenges. The latter are presented in the form of "Reach a combo multiplier of ...", "Perform a rotation of a number of degrees", "Do not touch the surfaces of this color".


These are variants that allow you to tackle the same level in a different way, forcing you to look for paths and perform movements that you had not previously imagined possible, and they allow you to see how Milkbag Games' level design is great. Too bad, however, that they tend to repeat themselves, by type, soon giving the feeling of already seen (although they remain fun to perform).

The repetitiveness is also felt from a visual point of view. The game environments are very generic and uninteresting, as well as limited polygonally. Let's be clear, in a video game of this type the priority is not to disturb the player with surrounding elements and allow him to clearly see the grindable surfaces that follow each other at high speed, but we admit that it would not have spoiled a more style. The soundtrack also tends to repeat itself a little too much, but remains adequate for the genre.

The work attempts to gain some character through a simple narrative: as athletes we are led by various sponsors, but in the background there is a large company, very suspicious, and a mysterious hacker. Nothing too interesting or profound, but it helps to give a little more context to the world imagined by Milkbag Games. 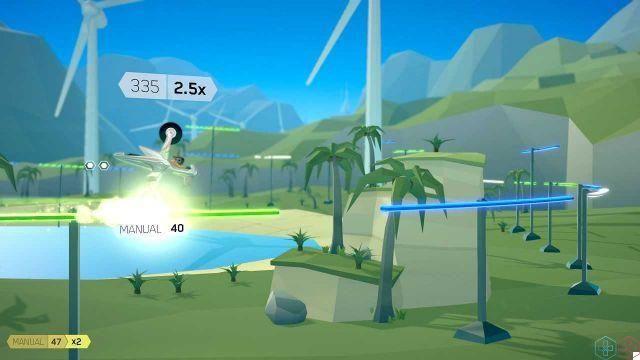 On balance, FutureGrind is an interesting arcade that will entertain and challenge fans of the genre for a good handful of hours, especially if you aim for 100%. Soon we find ourselves in that classic “one more try” loop that results in great satisfaction when, finally, the track is completed.

The basic idea is very simple but declined in various ways also thanks to the five available bikes that force you to play in a different way (each path, however, is linked to a specific model: it is not possible to choose freely). The poor stylistic level and a polygonal mass set to a minimum prevent it from being memorable, but it is an easily ignored limit. Finally, the difficulty curve is well calibrated.

FutureGrind is a great starting point for Milkbag Games: building on this formula, and on the quality level design that the team has shown it can express, could give us a second chapter capable of reaching the highest levels of the genre.