Gears 5: Hivebusters expands the game world of the exclusive Microsoft and opens up interesting opportunities on the distribution model offered by the Game Pass: let's find out in this review

The Gears 5 dlc has arrived a bit quietly and without too many advertising claims. It is a short narrative expansion that wants to tell a story parallel to that of Kait. A content of this type had been loudly requested by fans, who had very much appreciated the campaign of the last episode of the series. And so here it is, with three hours of gameplay all in all very traditionalist and fun as always.

Yet when we think that Gears 5: Hivebusters is coming to launch on Xbox Game Pass Ultimate, we can't help but reflect on one thing. The Microsoft subscription distribution model in the last two years has allowed the production of projects that otherwise would never have seen the light. Think of the lucky Grounded or the daring Microsoft Flight Simulator. In other contexts, perhaps, another publisher would have thought twice about it before financing very specific works with little appeal to the mass audience. Perhaps even the latest content developed by The Coalition would not have seen the light without Game Pass: let's see together in this review why the question is more interesting than it seems.

The new adventure in the world of Sera consists of a single act and is divided into six chapters, for a total of about three hours of gameplay. The price on the digital store is twenty euros. A little 'a lot, although the fun is not lacking, as we will see. If we didn't take the price into account, the final grade would probably have been half a point higher - assuming the numerical grade really matters. We therefore found ourselves in the unpleasant condition of having to separate the artistic product from the commercial one in some way.

Should a video game be evaluated as a literary experience or as a consumer product? This is where the Game Pass comes into play. By subscribing to the Microsoft service you can access a very large library of titles by paying a monthly sum. This you probably already know. For the past couple of years, for Xbox players, the price of a title has no longer been a key element in choosing what to play. And, if on the one hand it is still a business model that transforms the video game into an actual product even more, on the other it allows you to churn out works that it would be unfair to reduce to pure consumption.

Gears 5: Hivebusters, as we will see later in the review, is perhaps not the masterpiece of the generation, but it shows us a new side of the series. 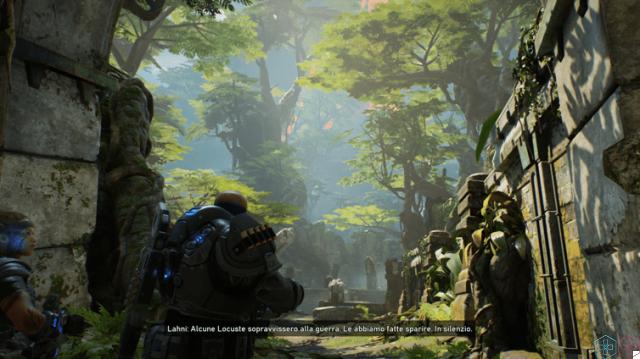 In this review we will explain how Gears 5: Hivebusters fits into the a particular narrative strand: the one with the colorful parrots. Let's be clear: Microsoft seems to feel particularly comfortable with tropical settings. Sea of ​​Thieves was a smash hit and Call of the Sea doesn't skimp on either birds with colored feathers. Well, even the Galangi archipelago where Mac, Lahni and Keegan's adventure is set is full of tropical islands, lush forests and colorful parrots - some not too friendly, we have to say.

The three protagonists (already met in the online mode called Escape) will make up the Scorpio team by order of Commander Hoffman, an old acquaintance for fans of the series. Their task will be to discover the origin of a nest of the Swarm located in the depths of the territory and perhaps make it out with a poisonous bomb. This is a very common plot for the saga, so much so that it reminds a little of the very simple one of the first chapter. At this round, however, the writers have decided to opt for a lighter and more positive cut compared to the usual dark and hopeless tones we are used to.

The Galangi archipelago is inhabited by a population that preserves traditions and rituals far from modernity of COGs and that deeply respects the environment and its inhabitants. This is a perfect place to develop one of the main themes of the series, namely environmental pollution and the relationship of the human being with nature. When technology is not enough to face the incessant hordes of the Swarm, the only answer will be found only in the inhabitants of the forest, and here we stop so as not to spoil the surprise, also because some sequences are simply delightful in the way they are developed.

While Mac, Lahni, and Keegan don't have adequate space to develop properly, their characterization and that of the supporting actors is quite successful. In a particular moment there is a too clear separation between the initial mutual hatred and the feeling of indissoluble brotherhood typical of every group of soldiers, but apart from this we really appreciated the almost fabulous cut with which the screenwriters introduced us to the beautiful settings and to the very delicate themes dealt with by the title. In fact, Hivebusters is almost a fairy tale. A fairy tale in Gears sauce, obviously. With lots of blood and bad words and bullets, but still a fairy tale. 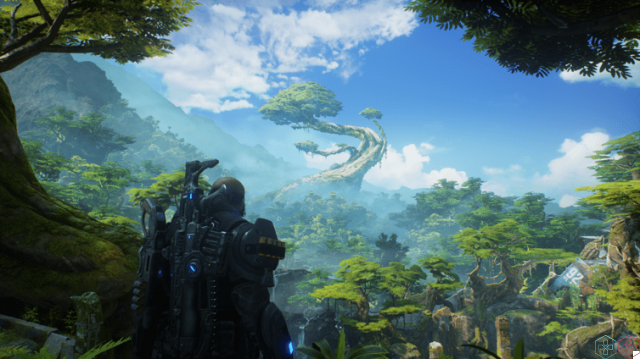 Where this dlc does not try to surprise in any way is in the play sector. Via the open world formula, via Jack's upgrades: it's back to the healthy, old shootings of yesteryear, in linear but very interactive environments. The title, if played in single player, will put us in the shoes of Keegan, but we can also be accompanied by two other players even in shared screen. Jack's absence is made up for by the special power of each of the protagonists, which can be enhanced by finding permanent power ups and will guarantee a very light strategic approach, but adequate for the duration of the adventure.

The covers that made the series famous are back, and all the enemies already encountered in the main campaign also return. Hivebusters summarizes the entire “Gears experience” of the last fifteen years in about three hours, offering a quite varied level design and situations that are always different, even if never totally new. We move from sections to waves in which we will have to resist for some time before help arrives, to the daring chase of a Snatcher, up to more linear sections in which we can sometimes also use a stealth approach (possible, but never necessary).

The only exception to this, however, excellent revival the beautiful final bossfight, really fascinating both from an aesthetic point of view, and as regards the playful aspect. In general, you get the feeling that Hivebusters does what the developers do best, but with some flash of genius that makes everything nice and at times galvanizing. A certain attention to detail, with highly destructible environments and interactive scenario elements, it does the rest and manages to fully satisfy the player. 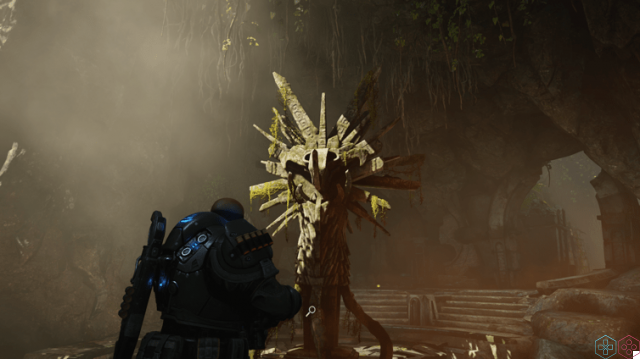 Gears 5 was a title with a mammoth technical component, but it paid the price of its open nature with a texture detail not always at the top. Hivebusters goes back to basics and offers us an absolutely granite title in performance. We played it on Xbox One and didn't encounter the slightest uncertainty. Everything runs at thirty frames per second with no slowdown. Which is surprising because, despite the limited breadth of the maps, the aesthetic quality is really off the scale.

We're not just talking about defined textures and detailed polygonal models, but also about some type of environmental interaction that the main campaign sacrificed in the name of the open world. If you shoot an object in Hivebusters, you will most likely see it blow up following the physics engine rules. The water will gush, the vines will react to your passage and even the tiniest of plants will move under your mighty Gears foot.

The Galangi archipelago is alive as never before in an episode of the series. This feeling of palpable physicality is also due to the splendid artistic work of the developers. The settings will offer varied types of environments. We pass from underground laboratories to ancient abandoned ruins, up to verdant forests and dry, sandy beaches. The backgrounds, sometimes hand-drawn, sometimes rival the quality of some things we've seen in Bungie's works, and the play of light is warm and pleasant.

The cutscenes are also very well done, as usual when it comes to Gears of War. The direction is of a good standard, perfect for a visceral action like this, and the feeling is that of having in front of a triple A product made and finished. Hivebusters indeed is, but it's still nice to see how much care has been taken in the creation of a small dlc collateral to the main experience. The package closes with a good dubbing in Spanish and a soundtrack with a more rocking tone than in the past, which we greatly appreciated. 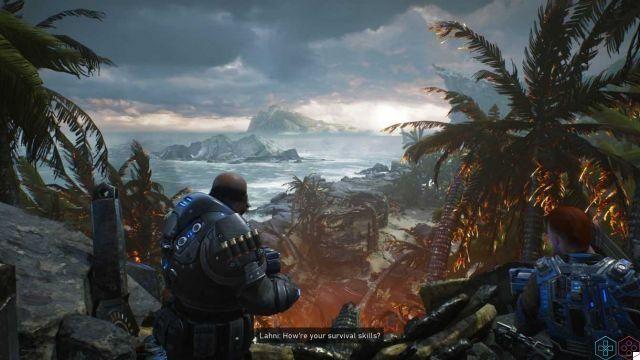 In short, the review of Gears 5: Hivebusters ends here and we have the feeling of being at the end of a cycle. The last year, for Gears of War, has been a very positive one. A great fifth installment, a strategic spinoff with great potential, lots of free multiplayer updates and now also a nice very nice dlc and capable, unexpectedly, of warming hearts. The Coalition series is one of the healthiest brands in the Xbox stable.

Hivebusters could open the door to a new narrative distribution model thanks to the possibilities offered by the Game Pass. We wouldn't mind seeing more small content like this in the future. as long as you better balance the price, the only real weak point of the production. Or you could subscribe, who knows.

Have you tried this dlc? Let us know in the comments and stay on the techigames pages for any news on the world of video games.