Football Manager Review 2019: Who's the Best?

Also this year the most played football manager ever returns, from Sports Interactive. Football Manager 2019, once again, surpasses its previous version by introducing some interesting innovations to raise the tactical-managerial football experience to a higher level: here is our review

In addition to the addition of the Bundesliga, Var and Goal Technology, important changes have been made to the team management system, training and tactics, before and during the match, and much more. We, sitting on the bench of the newly promoted Cosenza, have dug deep into the complex mechanics of Football Manager 2019, discovering the news and additions in this new chapter of the series.

At first glance, the menu screen is unchanged from that of the previous chapter. However, the submenus selectable from the column on the left have been revisited and improved both graphically and in the setting, and new functions have been added. For example, in the section Dynamics, it is now possible to set a hierarchy within the locker room by selecting the more or less influential players, for a more organized team management. In this way, speaking with certain players (which we will choose), it will be easier to maintain order in the squad, with repercussions on morale and physical shape. 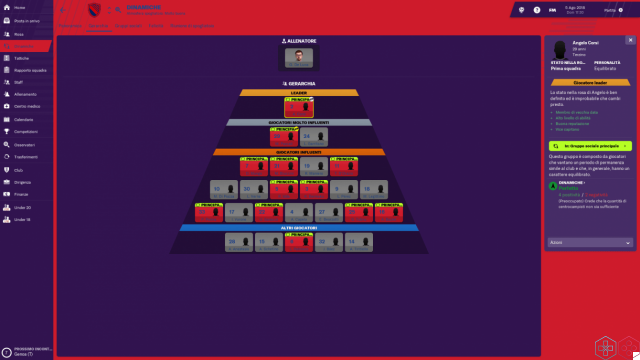 The section Tactics has been improved, and a new menu has been added for fast tactics, to make match preparation quicker, easier and tidy. From a special drop-down menu it is possible to choose the team game setting (Tiki-taka, long ball, fast break, etc.), and then customize the chosen setting, with the movements that the players must follow in possession of the ball. , in transition, and without the ball. As in the previous chapters, in this section it is possible to choose a game mentality (offensive, defensive, etc.), and to train. In addition, i Game plans, that is the goal that the team will try to follow in the match (for example, to win with a difference of 2 or lose by 1, and so on).


The section Training it has been revised and improved a lot compared to the last chapter; now it is possible to choose between at least 40 types of training, collective for groups of players (which we will assign), or individual for individual players, planning the calendar and scheduling based on the match calendar. The function of evaluation training, will allow us to obtain from the staff a grade from 1 to 10 of the weekly sessions, to evaluate the progress of the team. In this way, we will have greater management and control over both the growing youngsters and the veterans of the team. With function Tutoring, in addition, it will be possible to assign a growing group of players to other more experienced companions, to learn new patterns and integrate into the mechanics of the team. 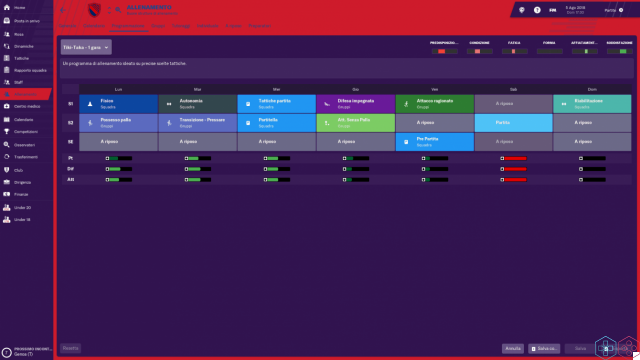 It is clear how Sports Interactive with Football Manager 2019 tends to make the experience even more realistic and faithful to the real world of football; this results in greater complexity and a large amount of information to be taken into account. For this reason, the feature was introduced this year Manager Induction, a handy tutorial that helps novice users to familiarize themselves with the game's mechanics.

As already mentioned, the pre-game is manageable by the users (as in the previous chapters) in the tactics section of the menu. After having entered the formation, set the style of play, the mentality and the plans of the team, we are finally ready to take the field. The management of the team during the match remained practically unchanged, if not for the ability to dynamically change the fast tactics we talked about earlier. As in the previous chapters, it is possible to make decisions about tactics, team setup and the type of game to adopt, based on how the game develops. The indications at the end of the first half, and at the end of the match, remain an important addition to influence the morale of the team.


The major innovations that can be found in the game, however, are in the graphics, in the animations and in the addition of the Var and Goal Technology. The 3D graphics sector has been slightly improved, the players are more fluid in their movements and new animations of shots and passes have been added (always taking into account the limits of Football Manager in this sense). It is clear that the addition of Var and Goal Technology are more for an aesthetic factor that brings back the realism of current football, than for anything else. In fact, these two new additions do not make any actual gameplay changes during matches, but it's always nice to see the camera showing how the ball has completely crossed the line with dynamic replays (albeit with basic graphics), or the referee who runs to the Var station to analyze doubtful situations. Clearly, this year too, the possibility of seeing the matches in the 2D isometric view, which maybe the nostalgic may prefer.

Finally, from this year the official licenses of the German championships will be available Bundesliga 1 e Bundesliga 2, complete with original badges, uniforms and player faces from all 36 teams. Also this year, however, the Spanish Liga and the English Premier League do not have official licenses, but we trust in the community of the game, always active in terms of patches.

Football Manager 2019 stands as a breaking chapter, taking the managerial experience to a new level of detail never achieved before. The improvement of tactics and training and the aesthetic innovations added by Sports Interactive further enrich an already satisfying simulator for football lovers. If on the one hand the implementations make the game deeper and more capillary in the management of the team, on the other they make it definitely difficult and slightly chaotic in some things.

Although the introduction of Manager Induction is appreciable, some aspects of the game remain complicated for both novices and the more experienced; the tutorial is set up in macrosections to give users a general indication of how the game works, without going into too much detail. The result is a superficial exploration, and little knowledge of the more "hidden" functions, which are usually the most important for a complete and conscious management of one's team. Furthermore, some problems to which the series has been subject for years have not been solved, namely thehigh number of injuries it's a unrealistic transfer market in terms of numbers and contracts.

Apart from that, Football Manager 2019 keeps its promises and achieves the expectations created in the users who were waiting for it. The experience is immersive, complete, and reaches a level of detail never before achieved in the series. Of course, it's not an easy title to play and it takes several hours to get into the deepest mechanics of the game, but once you get into the rhythm, taking your favorite team to the top of Europe is particularly rewarding. Absolutely recommended, for lovers of the genre and for those who are sick of football.

add a comment of Football Manager Review 2019: Who's the Best?