The official car simulation of the F1 world championship returns to the homes of enthusiasts bringing with it a consolidated background, embellished with decidedly interesting news. Find out more in this F1 2020 review

Sports 2020, but not only, began with many difficulties and numerous upheavals due to the world pandemic. Among the sports that had to wait for the start of the new season and that had to deal with a substantial change in the calendar there is certainly the F1 automotive world. However, the difficulties have not discouraged the fans of adrenaline on four wheels who have been able to count on the videogame counterpart.

In fact, as never before in the lockdown period, official drivers like Lando Norris and the Ferrari driver Charles Leclerc above all, they organized intense training sessions and exciting races aboard their very expensive simulators, grinding kilometers on the tracks of the F1 2019 video game in streaming in front of their fans. Definitely a good certificate of quality for one of the video games that have always been considered among the best sports simulations, capable of updating itself every year by refining the driving model more and more and introducing new high-quality content. F1 2020 follows closely in the footsteps of its predecessor by applying as absolute reference point for fans of the sector. I'll explain why in the rest of the review.

The most substantial novelty, in terms of content, introduced in F1 2020, is certainly represented by the mode My Team (Career Team). Are you passionate about the classic career mode in which you have the chance to bring your in-game alter ego to the fore to absolute glory? If the answer is yes, you will love My Team madly. In fact, within the My Team mode you will have the possibility to create the eleventh team in the world championship and manage all its parameters, as well as being the first official driver.


The managerial simulation has a decidedly high depth, starting from the choice of the name of the new team, then passing through the choice of the engine to be installed on their cars, from the liveries to the sponsors, arriving at the choice of the teammate (which differ from each other according to numerical parameters) who will compete with you to lead the team to win the constructors' title, all without distracting attention from financial resources. However, these activities represent only the first step of this new modality, which it is gradually deepening with a trend that is directly proportional to the fame you will be able to achieve. 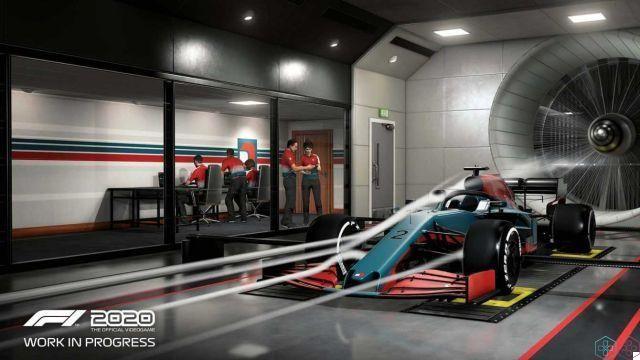 In fact, between one grand prix and the next you will be able to manage all the collateral activities that are the basis of the managerial management of a company. You can for example choose which sectors of the team to strengthen through economic investments (for example, to buy increasingly performing simulators to allow the team's drivers to improve their statistics and therefore performance on the track) as well as obviously investing in upgrading the car.

Or engage in activities of marketing and promotion with the aim of attracting sponsors willing to invest more and more in your project. All this will only make your team acquire prestige, attract more and more skilled drivers and gain in pure performance of the car that you will drive yourself.

Confirmed, of course, the classic game modes season, single and multiplayer grand prix (basic but effective). The local split-screen mode is back, due to great demand and to the delight of many users, an unmissable gem to complete the very complete range of contents.

If in recent years the gameplay of the F1 series appeared, however functional, in a limbo between the total simulation and the arcade, F1 2020 finally manages to position itself exactly in the middle, proposing a practically perfect driving model capable of not displeasing anyone. The differences with the past are evident and can be seen from the first corner. The brake they are decidedly more effective and the feeling is that of having a car anchored to the ground (as it actually should be), a feeling highlighted even more clearly by the traction that you can get when turning.

The cars will finally be firmly on the ground and will respond to your controls in an even more realistic way, leading you to oversteer only if you exaggerate with your foot on the accelerator or by having all the technology available to intervene to keep the car stable. In summary we could say that the new guidance system, despite being somewhat "simplified" compared to the past, has nevertheless made clear steps forward in the perspective of realism. In this sense, the feedback that the same pilots mentioned in the opening of the review have poured to Codemasters have certainly made a difference.

In terms of gameplay, a new defined mode was then introduced "sporty" and dedicated to beginners or to those who want to approach videogames lightly, looking for an even more arcade driving model. In fact, by selecting the sport mode, the traction control will intervene even more effectively (beyond the realistic) making the car stable in any situation, even in involuntary excursions on the track. Tweaks also in the management ofERS (Energy Recovery System), now made automatic with the only possibility of activating the mapping dedicated to the overtaking phases. 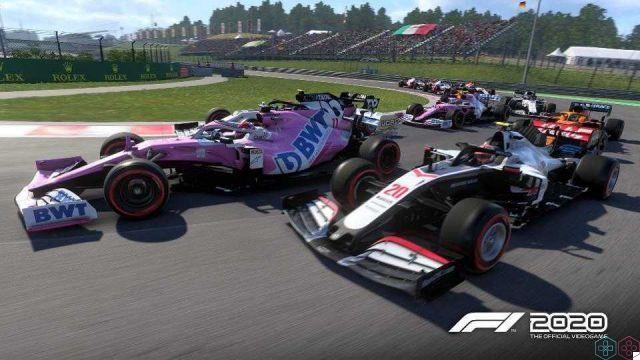 Tougher opponents than ever | F1 2020 review

The artificial intelligence entrusted to the pilots commanded by the CPU is one of those few aspects that takes a step forward even in this last iteration but still fails to be at the top. The general difficulty due to the grit of the rivals has visibly increased, which can only be a positive aspect, which allows, together with the reinterpretations in the gameplay, to have even more excited situations. Furthermore, it's really nice to see riders making mistakes more frequently than in the past (when braking, when setting curves or when exiting), even trivial at times, which lead to single or group accidents.

What still does not convince, however, lies in the choice of trajectories by the artificial intelligence, which does not tend to make corrections at the last moment. Practically, this translates into single-seaters that, during overtaking, do not hint at making corrections from what is the ideal trajectory calculated by the CPU and, consequently, you will have to calculate the accident risk based on this, sometimes making you give up on 'make some overtaking. 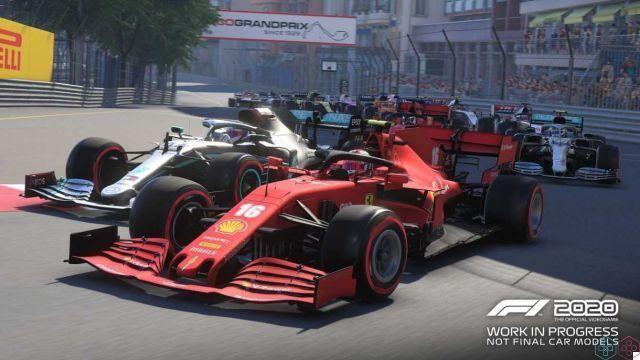 Graphics at the top of the possibilities | F1 2020 review

The F1 series has always stood out for a excellent level of care and cleanliness of the graphic aspect and even F1 2020 (in the PC version we tested) does not disappoint from this point of view. The performance of the vehicles is always at the top, as well as that of the tracks, both on the asphalt and in detail from a distance, outside the track. No transcendental changes, let's be clear, for that we postpone the judgment to next year for what we will surely see on the new generation consoles, but at the moment we can be considered more than satisfied with an overall product that it sins above all in the interlude scenes, in which the rendering of the faces (but not only) is not up to par.

No disappointment, however, when you are inside your cockpit, on the contrary, the new tracks of Hanoi and Zandvoort, not being in the previous versions of the videogame and having therefore been created from scratch, they are even more fascinating and full of detail than the other circuits, probably an anticipation of what we will see in the future in this series. No problem with regards to the framerate, always super high at maximum details, even on non-high-end PCs.

The various sound samples are realistic and the technical comment of Carlo Vanzini and Luca Filippi has always been appreciated, even if one might think in the future to extend these interventions also during the race. The contents introduced in the version are also interesting Deluxe Schumacher Edition of F1 2020 which includes, in addition to the videogame, the Seventy Edition DLC including four of the most important cars driven by the champion (including the historic Ferrari F1-2000), aesthetic design and exultation of the same driver and new dedicated liveries that can be used in multiplayer that go to join the F2 already introduced last year.

It's time to take stock

F1 2020 is the best F1 videogame ever, maximum expression of the evolution of the series that took place in recent years. It is not yet a perfect product, carrying all the limits of this generation on its shoulders, but it is absolutely a recommended product for enthusiasts and not for adrenaline-pumping single-seater racing.