Dragon's Crown Pro also returns to the current generation Sony flagship after many years: it does so with an unforgettable artistic style, solid mechanics and a completely renewed visual sector. We return to hunt for the Dragon's Crown

In 2013 probably Vanillaware, the talented team that had already made itself known with other appreciable productions with a very similar graphic style, marked the high point of his career. He did it with Dragon's Crown, a dungeon crawler that at the same time married (and marries) in an excellent way traits coming from fighting on tracks, action adventure, RPG and many other beautiful things, if dosed in the right measure. The edition that you may already have in your hands thanks to Amazon or your trusted retailer is practically the same, as beautiful as then, with the defects of that time, with the contents of that time. What really changes in the "new" Dragon's Crown? The fact that it is now also available on The PlayStation 4 is a PlayStation 4 Pro, on the latter of the two with full 4K support.

There is also another aspect, however, particularly noteworthy: you remember how pleasant the tracks of the soundtrack conceived by were Vanillaware for your title? One believes that one cannot go beyond a certain point, until the developer proves the opposite: in this case it was enough to simply re-arrange everything by orchestrating the entire soundtrack. This means, especially if you own one PlayStation 4 Pro, it's time to enjoy Dragon's Crown Pro (will the reference to the “Pro” be a coincidence?) to the fullest of its acoustic and visual possibilities.

Dragon's Crown offers seven protagonists: the Amazon, the Dwarf, the Elf, the Warrior, the Sorceress and the Magician. One for each style of play, a possibility for a level of challenge ranging from simple to balanced, up to the openly technical and difficult: so much so that Dragon's Crown Pro warns us, telling us that if it is our first adventure it is better to play with the Warrior rather than the Mage. If to date Dragon's Crown is still remembered as a title not only valid, but very valid, he owes it above all to the characters lined up by Vanillaware: they only have generic names that have always been heard everywhere, but each of them offers a unique gameplay, precise moveset, peculiar skills to learn, so much so that we do not exaggerate when we say that it is worth living the main adventure at least six times, once for each of them.


As pressing and charming as it is, the characters of the story are much more effective told by Dragon's Crown, which foresees the classic kingdom in danger, the legendary and unlikely hero ready to save him, and the mission that will lead him to obtain a legendary object that is said to be able to control the Dragons, the most powerful creatures ever . But in the end, the story is only the beginning of the entire playful offer: so much so that Dragon's Crown not only continues, but perhaps begins, at the moment of its conclusion, with the Crown brought to safety in the hands of those who will not use it for purposes. wicked. The post endgame is still full of dungeons and levels full of fierce enemies, very useful not only to allow us to level up even more but also to test our true skills within a fantasy-medieval world full of traps, dangers and gigantic bosses.

The mechanics of Dragon’s Crown Pro have been naturally left unchanged: we are still struggling with a Action-RPG with horizontal scrolling, where in the company of up to three other players (controlled by friends or by artificial intelligence) we will make our way through about fifteen different worlds, all adequately varied and characterized, eliminating a multitude of enemies who would like to block our path to the Crown. 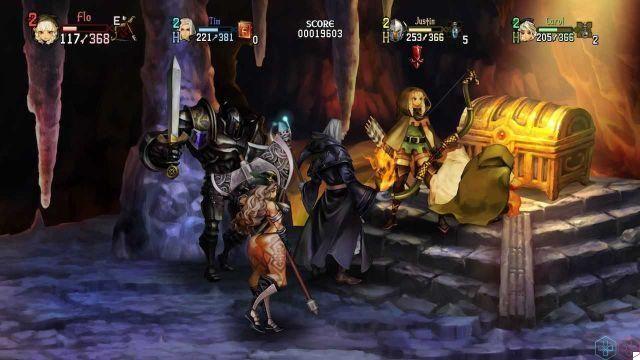 A combo system apparently basic hides a depth worthy of all respect, which allows our character to level up, upgrade and spend the right points to buy new skills, a certain number of which are unique: just to give an example, the Warrior can carry out devastating physical attacks , the Magician cast powerful spells (otherwise of course he would not be a Magician). Their degree of complexity, strategy and technique varies as we improve, and we can also do it from the point of view of the equipment, meticulously divided into main weapon, clothing, accessories and consumables.

But the real litmus test Dragon’s Crown Pro is not in its mechanics or in the revived game plot: as much as we would have liked with all our heart to see the introduction of at least a couple of new dungeons, enemies or main characters, the real strength of the re-release consists in a completely revised technical and sound sector. Not that before the prodigal son of Vanillaware was not still beautiful to look at, with those very particular designs in proportions and colors, exuding style from all pores: but in 4K they are certainly even better. Same goes for the excellent soundtrack, which as we have told you has been completely re-orchestrated and now gives its best both in the excited phases of the battles and in the more relaxed ones. From an artistic, graphic and technical point of view, there is little to do: Dragon's Crown Pro is a masterpiece ..


Dragon's Crown Pro, the verdict of the review

There are really no excuses if you haven't tried Dragon's Crown Pro until now: you had PlayStation 3 and PlayStation Vita as platforms, and now PlayStation 4 has also been added, which moreover allows you to enjoy in 4K or at least in Full HD. of Vanillaware's masterpiece. It is a title that manages to draw on peculiarities and fixed points from multiple genres at the same time, offering an original, fresh and fun reworking. Do you like RPGs? Do you like scrolling fighting games? Do you like action games? If at least one of the three answers is yes, then run and try it. You may be enchanted by its charm.

Dream Alone Review: Platformer has never been so bleak ❯