In recent years, there have been numerous single player and open world RPGs that have tried to break away from the classic formula of the genre to create something new, but none have managed to hit the target like Disco Elysium. The title marks the debut of ZA / UM, a small indie studio of just twenty people, who decided to aim extremely high with his first game.

The world of Disco Elysium does not stray far from ours, even if there are very slight supernatural elements. Our adventure is set in Martinaise, a poor and lawless area of ​​the city of Revachol. The political situation of the city is very difficult, since after the war the various political factions have had difficulty in exercising their power and a stable government has not yet been established. Furthermore, the population of Revachol comes from all over the world, making the city a cultural cauldron full of the most disparate ideologies, which will often be in stark contrast to each other.

Martinaise is an area that has been particularly hard hit by the war. The streets still bear the marks of the bombings and it is not difficult to stumble upon destroyed and abandoned buildings. In this place the police have no authority and consequently many people fleeing the law gathered here. Order in the neighborhood is maintained by a workers' association with a strong leftist ideology and which manages the port workers. 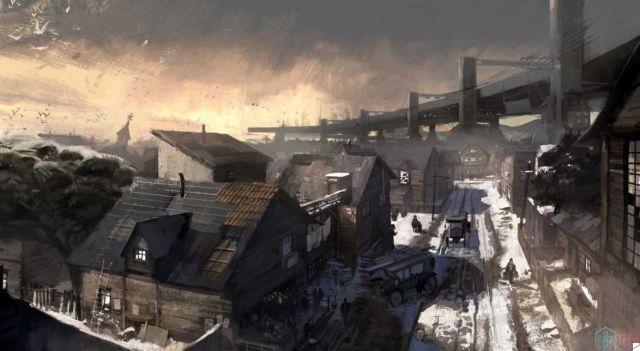 The best cop in Revachol or a complete disaster? - Disco Elysium review

In Disco Elysium we will play as a detective from the Revachol police force who arrived in Martinaise to investigate a murder. So far it seems to be a very standard opening but there is a peculiarity, we have lost our memory. At the beginning of the game we will find ourselves completely naked, in a destroyed hotel room and with the after-effects of a colossal hangover that caused us amnesia.


This memory loss will not be a passing effect but a real one total amnesia that made us forget everything: our name, our face, where we are, what money is, in short, everything. This clever narrative stratagem will allow us to impersonate our protagonist according to our preferences and it justifies our ignorance of the world of Elysium. We can decide to follow our initial goal and solve the case by trying to recompose our life, or we can simply go and drink with the other drunkards of the city; the choice is entirely ours. 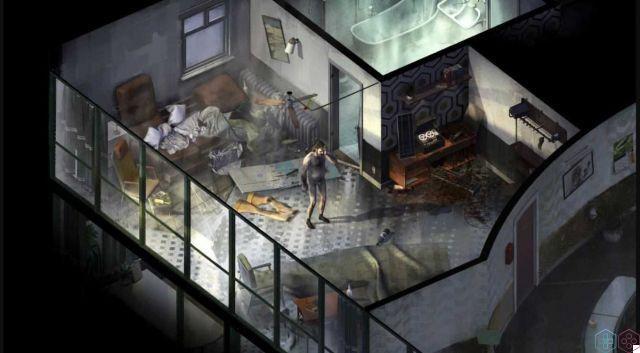 In the title there are no real classes, but at the beginning of the game we will have to choose between three preset archetypes, or we can create one from scratch. These archetypes vary only in the distribution of the points of the four main stats: intellect, psyche, physique and motor skills. Each characteristic corresponds to five abilities, which will not only be parts of our personality, but real allies.

Le ability are one of the most interesting elements of the title, as they will behave just as if they were gods real characters, each with different ideas and approaches. Throughout our adventure these skills will provide us with additional information based on your role, for example a high level of empathy will allow us to understand the mood of a character through small gestures, while perception could make us catch a certain smell in the 'air. Whenever we find ourselves relying on our skills we will start real dialogues with them, in which often the other skills will also interfere, which will try to convince us to follow a different approach or provide us with additional information.

A great representation of a tabletop RPG - Disco Elysium Review

In Disco Elysium every time we try to perform an action, the outcome will be decided by the throwing two six-sided dice. As in the best paper RPGs, each shot will have its own difficulty score, and to overcome it we will have to rely on nuts and our characteristics. Some actions that can be performed in the game, such as avoiding a bullet, cannot be repeated in case of failure, but others can. These actions will be highlighted by a white background and can be retried, but only after leveling up the necessary skill.

Our shots are not only influenced by our characteristics, but also by others external factors. For example, it will be very difficult to obtain a confession from a suspect using only our authority, but it will be much easier if we have access to concrete evidence. In the same way we can try to open a closed box with only brute force, but having a crowbar will simplify the work for us. It is also possible to rely on drugs and alcohol to temporarily increase our stats at the cost of a few life or morale points. However, we must always pay attention to these two values, because if they go to zero they will lead us to a game over, caused by a heart attack or a nervous breakdown. 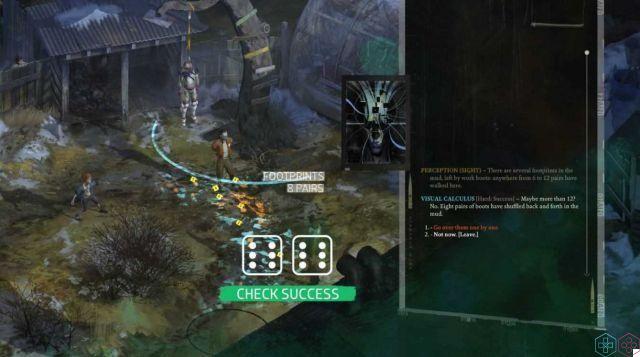 Our statistics can also be modified through i clothes. Equipping certain clothing will provide us with bonuses or penalties to the statistics, based on the type of clothing worn. For example, tight pants will make us more attractive but reduce our mobility.

There is also another way to change our values, namely through ideas. These ideas can be obtained by reading, talking to people or in many other ways, and can be equipped in our "cupboard of thoughts". Once the ideas are equipped, we will have to wait some time before discovering their effects, in order to allow the character to think about them. The waiting time varies according to the complexity of the idea, so important thoughts such as our political orientation will take many hours. Ideas can be freely equipped but skill points will be spent to be removed and slots are limited, so it's best to think carefully before equipping them. 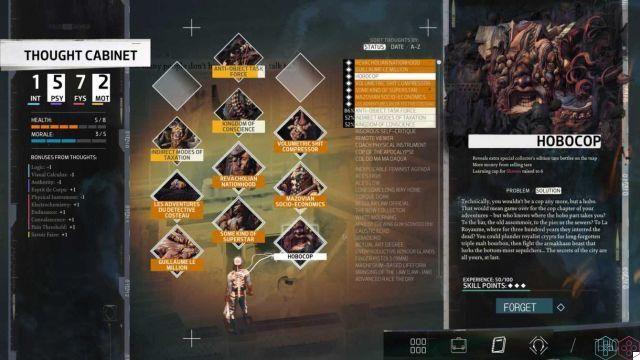 ZA / UM was born as a cultural movement made up of many artists and writers, so it's no wonder Disco Elysium is so well looked after when it comes to dialogue writing and art. In the game they are present over a million words and both NPC speeches and our dialogue options, they will always be of quality. We will have a lot of choices when we approach the characters and their reactions will always be consistent. Moreover, the dialogues we undertake with ourselves will always be written in an excellent way and full of depth.

Also the artistic sector is well cared for, both in terms of environments and characters and for the pleasant soundtrack. But one note of merit particular should be made with regard to thoughts and skills. The thoughts will be represented as real ones abstract paintings which symbolize a certain concept and could easily be exhibited in a museum. The skills, on the other hand, will always be represented in an abstract way to manifest a concept, but they will be portrayed to resemble faces. In this way we will be able to associate the words of our skills with a face, allowing us to recognize them easily. 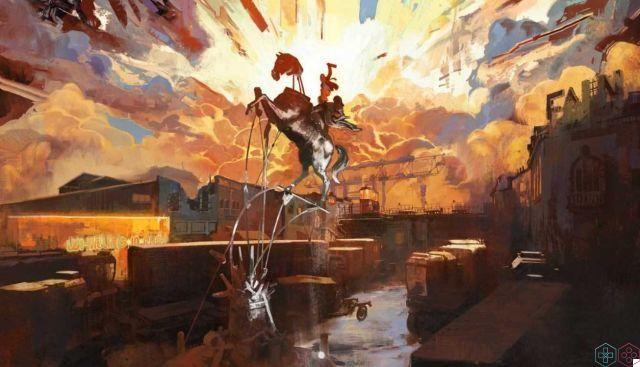 Disco Elysium is a title exceptional who managed to find new and valid ideas for a type of game that has now seen everything. The title manages to remain interesting throughout its duration and overall the adventure is quite balanced. The only note that might annoy players a little is the presence of the negative and positive critic. This mechanic has always been present in paper RPGs and allows you to win or fail a test regardless of your stats, should the highest or lowest possible value come out of the roll of the dice. This can be frustrating if you fail a shot with a very high success rate on one of our main stats.

From a technical point of view, the game presents almost no problems. During our test we did not find any kind of bugs or crashes of the software. The only problems are a little bit of slowness in loading larger areas and some textures. If you are a lover of old-fashioned RPGs, Disco Elysium is the game for you, but you must still consider that the title it is only available in English and in some cases the dialogues are quite complex, so before proceeding with the purchase you should think about your knowledge of the language.

Disco Elysium is available from today October 15th on PC. If you found this review useful and want to stay updated on all the news regarding this title and much more, keep following us here on techigames.

add a comment of Disco Elysium Review: A unique RPG