In this review we will talk about Chivalry 2, the new medieval multiplayer hack and slash developed by Torn Banner Studios and published by Tripwire Interactive

Chivalry 2 is the sequel to Chivalry: Medieval Warfare, for an hack and slash medieval multiplayer developed and published by Torn Banner Studios in 2012. Also in this second chapter the players will be able to take on the role of a soldier of the Agatha or Freemasons, two factions constantly fighting each other, only to then clash in crazy and chaotic battles. The new Chivalry 2 is already available for both PC and console and with this review we will help you understand the actual quality of the title.

Chivalry 2 is based entirely on a combat system apparently simple but which actually hides deeper than you think. Except for bows and crossbows, all other weapons in the game will mainly have 3 types of attacks: slashes, attacks from above and lunges. Each of these moves will have one specific area of ​​effect and a precise playing time, but it can also take a few more seconds for upload them and inflict greater damage. Hitting an enemy first will also allow you to stop his actions, so it will be essential to understand which move to use to get the better of your opponents. There are also many other actions that are perfect for catching opponents off guard such as for example kicking, throwing your weapons or performing feints.

Obviously, however, the players will not stand still to get hit, but they will try to defend or dodge. Both of these actions will allow you to consume a certain amount of stamina in order not to suffer damage, but there is also the possibility of protecting yourself without any malus. In fact, by using an attack while you are defending yourself, you can deflect enemy shots at the last second without consuming resistance and then fight back promptly. This move will also allow you to also use your next attack as a parry, thus allowing you to face large groups of opponents at the same time. To perform this technique correctly though you will have to use the same type of attack chosen by the enemy and consequently you will have to carefully observe its movements.

Thanks to all these possibilities you will need reason a lot to be able to win a 1vs1 match in Chivalry 2. Furthermore, although most of the fights in the game are extremely chaotic, applying these techniques will allow you to have big advantages over those who just attack blindly in the fray. 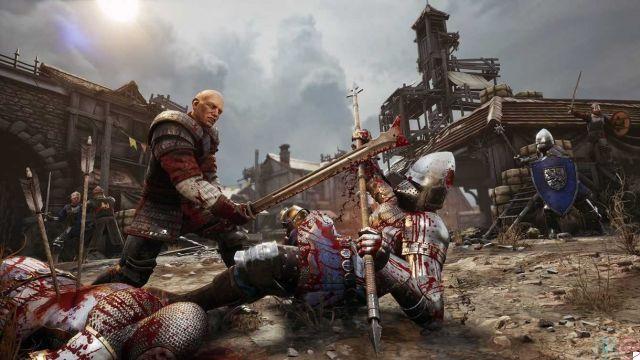 Chivalry 2 is an entirely online game and within it they are present different modes linked to specific maps. There are obviously arene deathmatch where your aim will only be to get kills, but there are also many missions with very varied objectives. For example, sometimes you will find yourself having to defend a village from the enemy invasion, while others may be the ones who have to storm a castle to free and rescue an important prisoner. These modalities can be addressed in teams of 32 or 20 players and to win everyone will have to work together to accomplish different objectives within a time limit.

However, as we have already anticipated, the matches of Chivalry 2 are a lot chaotic and consequently the teams will not be able to coordinate very easily. On the one hand this it may frustrate some players, as at times you may end up losing miserably to the fault of others, but on the other hand it sets the stage for many funny situations. In fact, you can often see players throwing themselves from catapults, enemies ready to hurl you at the limbs of your companion and allies too busy playing the lute to help you in combat. All this madness manages to create gods truly absurd scenarios that will entertain you even during the hottest clashes. 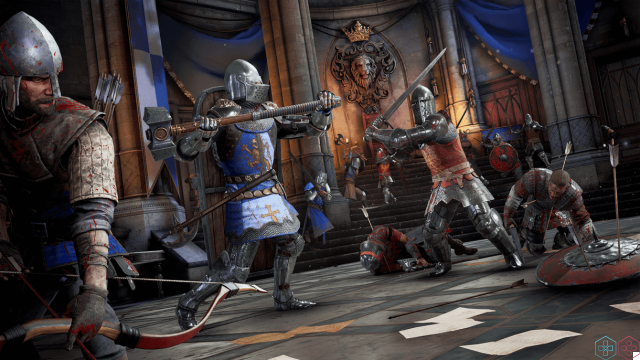 In Chivalry 2 you will be able to fight using any junk you come across, but to be able to win it is essential find a class that suits you. The game's classes are archer, vanguard, footman and knight, and depending on which one you select you can have different advantages such as specific sets of equipment and unique skills. These roles are great for offering variety on the battlefield and beyond they can also be modified by leveling up.

By using a class often you can in fact make it gain experience that it will allow you to unlock new gear and even new subclasses. As if that were not enough then even the individual weapons will be strengthened as you use them, thus allowing you to become more skilled in handling them. Finally, it is also possible to gain experience to increase the level of your account, but this will only allow you to unlock cosmetic items (which can also be purchased with the in-game or premium currency).

Chivalry 2 is an online game and like all titles of this type, it must use methods that encourage users not to abandon it. From this point of view it seems that Torn Banner has hit the mark, given that all these progression possibilities are a great incentive to play. Sure, it's important that the team continue to support the game over time with new content, but currently it looks like they're heading in the right direction. 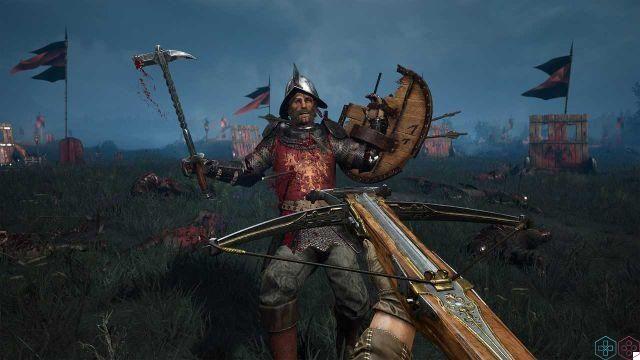 From the point of view technical Torn Banner Studios' new title isn't bad at all. For this review we played the PC version of Chivalry 2 and the performance satisfied us on too mid-range platforms. The game in fact proved to be very light and capable of maintain 60 FPS without sacrificing too much graphics quality. Also in the course of our long test we didn't run into any noteworthy bugs.

The only problems we encountered are those related to server. In fact, we often ran into matches that unfortunately suffered from several very annoying lag spikes which could not be remedied. We also came across some unstable servers that did not allow players to respawn properly and that very often they ended up crashing. 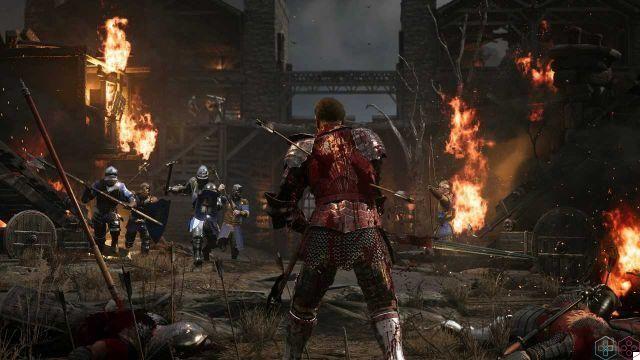 Now the point of our review has finally arrived where we take stock of Chivalry 2. The new title from Torn Banner Studios is a great product that swill surely be able to offer hours and hours of fun to all fans of the genre. Although the clashes are very chaotic the combat system is quite deep and the different maps and modes available will be able to entertain you even after many hours of play, especially if you play with friends. Also, thanks to the different progression opportunities, you will have the opportunity to keep unblocking content for a long time. In short, if you love to throw yourself into the fray to face crazy clashes lightly (but not too much), then Chivalry 2 is perfect for you.

Chivalry 2 is available now for PC, PS4, PS5, Xbox One and Xbox Series X | S.. If you are interested in staying up to date with all the news on the world of video games and much more, then keep following us here on techigames. Furthermore, in case you want to buy some games at an advantageous price, we suggest you take a look at the many offers on Instant Gaming.

add a comment of Chivalry 2 review: screams, blood and laughter