Inis and Seasons of Inis review: an unknown gem

Inis is a game from the French publisher Matagot, part of the Kemet-Cyclades-Inis trilogy, which sadly was never officially released in Spain. In this review we discover the features that make Inis unique and deeply fascinating

Opening a review of Inis, the first thing you would expect is a deepening on the gameplay or the setting of the game; however, what strikes and characterizes the game to the core is his graphics to take your breath away. A vigorous and full color palette, with lines that chase and clash harmoniously, describe the mystical landscapes of Ireland and leave us speechless until the end of the game. “At the heart of Celtic legends” reads the subtitle: incredibly, it is the colors and images, even before the captions, although rich and appreciable, that tell us about great heroes and mystical expanses. Each card, each card, even the box, are small masterpieces; we never get enough of admiring them during the game and beyond. 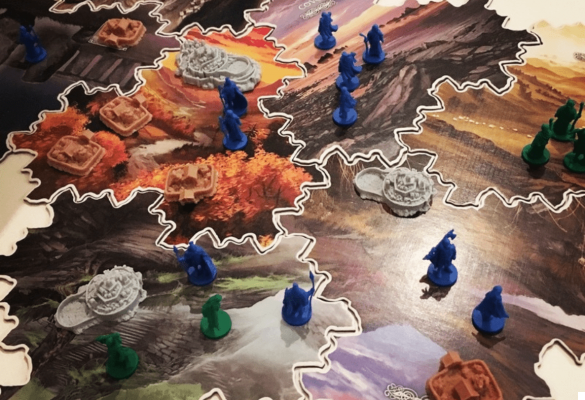 Protagonists of a legend | Inis review

What happens in a game has already happened centuries ago, and has already been passed down from druids and bards to vigorous young warriors. This because we impersonate a tribe of Celts - we do not know specifically which ones; however, it is quite safe to assume that they are the ancestors of the modern Irish and Scots. Each tribe will try to impose itself on the others, with the aim of uniting all under a single sovereign; this will happen by exploring new territories, waging war with rival tribes and intertwining one's destiny with that of gods and heroes, using their great powers.

So far all fascinating, but concretely you are wondering how the game flows. It is soon revealed, the turn revolves around an action draft: there are about twenty, which are drafted by the players and, when everyone has played them, the process is repeated. These actions allow us, each with particular methods and bonuses, to:

The regulation can be summarized briefly, and simplistically, in "each turn a player plays a card from his hand and applies its effects". Of course there are other footnotes and rules, but the structure of the game is this: probably one of the brightest examples of “easy to play, hard to master” available on the market.
Is your impression that it could be boring or repetitive? Keep in mind that, if the action cards are always the same, the situation on the map changes and changes with each play: you will have to constantly readjust your strategies according to contingencies. 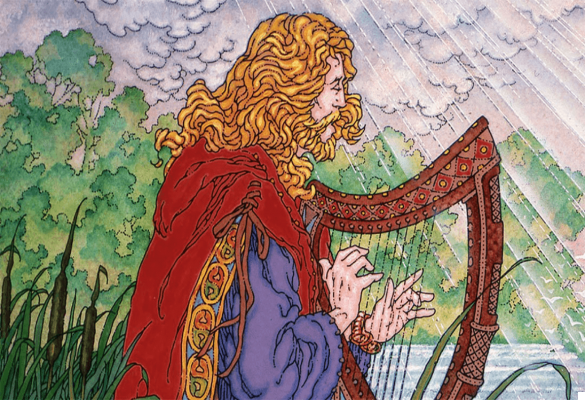 How does one become king of the tribes in Inis? | Inis review

If the structure of the shift is clear and agile, we must make a different consideration on the victory conditions: they are various, often demanding to foresee and prevent and, above all, they give rise to a "Bash the leader" quite punitive.


The first condition of victory foresees that a player has "subdued" six or more opposing playing figures; in other words, this happens when, in the territories we control, there are a total of six or more miniatures belonging to other players. For the sake of clarity, a territory is controlled when the player has the most figures on it. We could assimilate it to one "military" victory.

The second possible condition for claiming victory is to be present in territories that have a total of six or more sanctuaries; in this case it is not necessary to be leader of a territory: if it happens to place a miniature on a territory with three sanctuaries controlled by an opponent, I will be able to count all three. We could assimilate it to one "religious" victory.

Finally, the third condition requires that our clan be present on six or more territories. In this case there is not much to explain, but we specify that not even this time it is necessary to be the leader of a territory to consider it for the purposes of this condition. We could assimilate it to one victory for "expansion".

A further addition is the myth tokens: they are quite rare to obtain and often require that you forego an important benefit, but they count as wild card when counting a victory condition. For example, if I had two myth tokens and were present on four territories, I could legitimately consider myself able to claim victory by expansion, occupying six (4 + 2) territories.

Only the most determined will enter the legend

Yep, claim ... Because when I actually fulfill a victory requirement, which is rather scattered to check in the middle of a game, I will be able to use an action to claim victory; as evidence of this, I get a "Pretender" token. At the start of the next round, the Pretenders check who has fulfilled the most victory conditions. If you identify someone who satisfies them more than the others, the game ends, while if there is a tie, the tokens are discarded and you have to start all over again. This usually causes a rage, in the course of the new round, towards those who met certain conditions: to prevent him from returning to claim victory, the hateful "bash the leader" occurs. 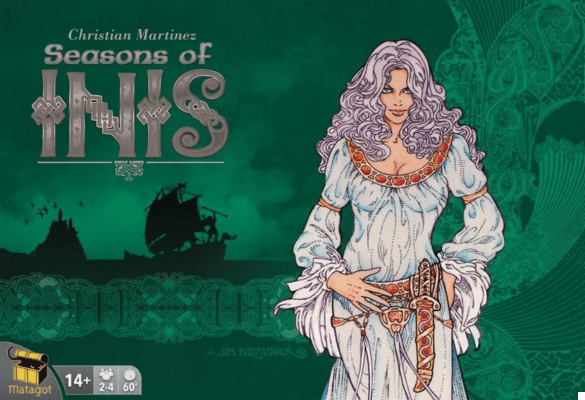 The Spring of a Game | Seasons of Inis review

In short, as simple to play as complex to win. And its success Inis has received it all right, so much so as to induce Matagot to reprint the game in May 2019, with a graphic of the box if possible even more mystical. While no gameplay changes to the base game came with the re-release, none other than it came out with it an expansion, Seasons of Inis, of which a review is required.

First, Seasons of Inis extends the game to the fifth player. It must be said that this change, although it was not fundamental, is really welcome: in fact, thanks to the simplicity of the game and the speed in explaining and setting it up, it is an ideal title to propose to include newcomers in the gaming group, even if you fast or partially fast from board games.

It must be recognized: the great merit of this expansion is that it allows to adapt the gaming experience to your needs. This is because the five innovations introduced can theoretically be selected and played at will. All five are:

Of the first point we have already said and of the third there is not much to say, except that the new effects complement each other with the modules of the expansion.

Considering instead the second module, the one for short games and called "We want a King", we must admit that solves one of the problems in the base game. This means eliminating the risk of the tie dragging on, especially when players persist in applying "bash the leader". In this way it is possible for us to rage, but everything is resolved, willy-nilly, within two turns; therefore it is necessary to do your calculations well and really aim to win, rather than prevent someone else from winning.

Seasons of Inis actually solves the critical issues detected in the base game, just like it happens with its brother Cyclades: where initially you can complain about a certain slowness and immobility on the map, ports question borders, opening connections by sea between tiles at the antipodes of the map. In this way, the movements, which are really slow in the base game, are prevented from rewarding a player perched far away from us. Similarly, the cyclicality, cross and delight of this game, is overall improved by the cycle of the Seasons, whose effects definitely impact the tactics to be preferred from time to time.

How do you usually buy a board game? Whether you are a virtuous supporter of physical stores or smart buyers on Amazon, in both cases you will be disappointed.
Yes, because unfortunately Inis has never been distributed in Spain. Why will you ask yourselves? We have all wondered and an answer could be identified in the theme. While the fascination for Greek and Egyptian mythology is firmly rooted in the Mediterranean roots of us Spanish, Celtic mythology finds its greatest enthusiasts in Saxons and Anglo-Saxons: if Matagot had made the same reasoning, we would explain why, while Cyclades and Kemet are been distributed in Spain, where we can now call them classics, for Inis this was not the case.

Another reason could lie in the fact that, unlike its siblings, Inis is a decidedly text-dependent game: therefore the choice to print it in a particular language must not have been taken lightly.
Rea convinced, not even in the case of the expansion did Matagot take the opportunity to remedy this lack.

Where can I find it then?

Assuming you want Inis in English, the answer is not Amazon. At the moment, and barring future changes, the only copy that is on Amazon is in Spanish, even if it does not appear clearly at first sight, so be careful to be hasty. The fact that it is out of Spanish distribution also makes it much rarer than its siblings on secondary markets; however, if you have patience and are looking for the opportunity, you can also try to look for it on these (Facebook Marketplace and various groups, Subito.it, Giochinscatola, etc.).
Fortunately, the best answer is also the simplest: on the Matagot website, you will find the online shop where the latest edition of Inis is on sale. Furthermore, buying from their site, you will also get free silk bags to keep your clans in order, a real treat.

Regarding Seasons of Inis, is more available: you can find it on the Matagot website (and you can also think of a combined shipment with the base game in this case) or in general on many e-commerce platforms.
Special note: Giochinscatola also offers the purchase in installments, for this as for other titles. Consequentially, if you want to reduce the impact on your wallet, it might be a good idea to spread the payment over several months!

What are you waiting for? Write your myth page, transported by the most suggestive images to date present on a board game.

7.5 The dress makes the druid

add a comment of Inis and Seasons of Inis review: an unknown gem