Two Little Mice has just made official the launch date of the Broken Compass Kickstarter, also unveiling a possible cover of the definitive version. Let's find out together

We introduced it to you in one of the latest articles, and now we have new, juicy information on Broken Compass and its Kickstarter. The new RPG of Two Little Mice (manufacturer of the roleplaying game of the year Household) already promises to give an explosion of adrenaline, mystery and a lot of adventure. In the last two newsletters, the developers have released new information, including the launch date of the Kickstarter and a draft of the Golden Age module cover. 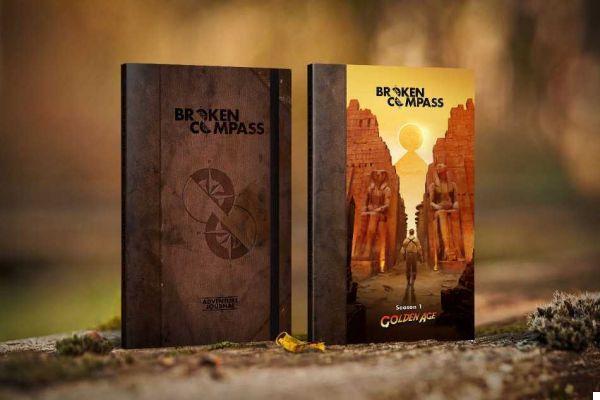 From 7 May we will therefore have the opportunity to invest our resources in Broken Compass. By supporting the project in the Kickstarter phase, we could ensure the release of the game and, why not, even unlock some luscious stretch goals. Meanwhile, Two Little Mice piques our curiosity with the release of the Quickstarter, which is already available for download by subscribing to the newsletter.

Yes, but what awaits us?

I can see it in your face that you are an Adventurer. That scornful smirk already tells me
that you can't wait to review a lesson that obviously wasn't enough for you. Yours
eyes are fixed on the treasure, i can't go wrong. And then the bruises, the scratches on the cheekbones,
the torn shirt and the dusty hat… you immediately see that the danger is yours
craft and recklessness is your middle name!
Dal quickstarter di Broken Compass

Travels and discoveries, treasures and mysteries: these are the basic ingredients of Broken Compass. In the new house game Two Little Mice, we take on the role of adventurers in search of treasures and mysteries to unravel; between wild forests and ancient ruins, with Broken Compass we have the opportunity to feel like the new Indiana Jones, complete with a hat and whip hanging from the belt. And to immerse ourselves in a 1999 jeans without a smartphone, or in the golden age of the 30s, thanks to the Golden Age module.


The game system is the Fortune System that we already knew in Household, based on a pool of d6. The Game Master, here called Fortune Master, is the one who draws and narrates the adventure; the players, however, are as always the heart and the life. It will be their choices, and the way in which they decide to face the Rivals, to mark the adventure and give soul and breath to the narrative.

As we said, the Broken Compass Kickstart launch is scheduled for May 7th. We still don't know all the details, nor do we know if and which stretch goals will be released; but in the meantime, we begin to get excited at the sight of the cover draft, and to imagine what other butts Two Little Mice has in store for us. Stay connected and we will read the next updates |