It is announced for Lucca and we are not already in the skin. Marvel Champions is the new cooperative LCG from Asmodee. Are you curious to find out what it is?

The Marvel Champions Card Game arrives in preview at Lucca Comics & Games 2019, to transport us into the world of the most famous Marvel superheroes. The cooperative LCG will in fact be tested at the fair at the Asmodee stand, and then sold in all specialist shops from November 1st. Iron Man, Spider-Man, Captain Marvel, Black Panther and She-Hulk will join forces to fight the wily Klaw, the unstoppable Rhino and the terrifying Ultron. In order not to make you arrive unprepared, we have taken the rules in hand and we are ready to tell you what awaits you. 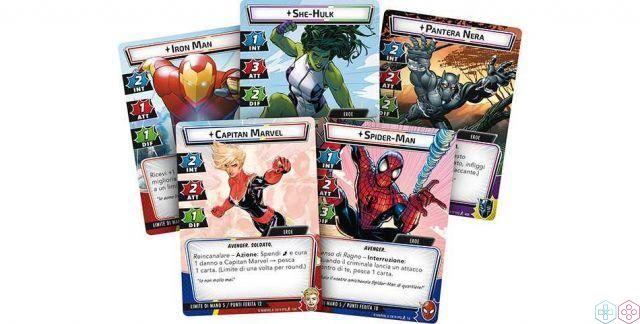 Join your friends in this new Marvel superhero co-op card game. Playable by one to four players, Marvel Champions will put you in front of three possible scenarios connected to as many evil criminals. Each fight will have custom characteristics, linked to the super-villain protagonist. From the assault of Rhino and Shocker, his fearsome ally, to the devastating sonic boom of Klaw; to Ultron's insidious army of drones, a challenge that will put the heroes involved in the game to the test.

Like any self-respecting Living Card Game, the Marvel Champions core set is just the first step. Playable individually, it can in fact be joined by new expansions that will enrich the game experience and change the structure of the battle. As in all LCGs, it will not be necessary to invest in card hunting, as these will be published and available in every expansion that will see the light from month to month.. And you will know in advance what you will find in each box, so that you can choose which direction to take your games.

Each deck of the LCG contains from 40 to 50 cards, chosen to flank the hero and impersonate him in every aspect. Each turn you can choose whether to play ally cards, upgrade cards, event cards or support cards from your hand. Each of these provides an advantage, and will help you to win. But, as in any self-respecting superhero saga, every choice has a price, which you will have to pay in order to play your asset.

Whether it is a request for mental toughness to invent a technological innovation or a physics to deliver a lethal blow, every turn you will have to choose which strategy to adopt. Often you will be asked to discard other cards in order to draw on a given resource, which will force you to decide which direction to take your game. But fear not, every action you choose to take will leave a mark on the battle, so no renunciation will be excessive and will lead you away from victory.

Each hero of Marvel Champions LCG is represented by a two-sided identity card, which shows his basic characteristics. At the beginning of the game you will be able to take on the role of your hero's alter ego and, once per turn, you can choose to transform your character, thus accessing his additional abilities. As a genius, billionaire, playboy, philanthropist, Tony Stark has construction advantages, but like Iron Man he can access the potential of his armor.

Choosing one face or the other of your hero will modify the actions of the criminal, who will adapt his moves to the character in front of him. Against Iron Man, for example, he could choose to attack you directly, while against Tony Stark, not recognizing you, he could choose to ignore you to return to his plans. The key to winning your battles is cooperation with other players, balancing each hero's powers and moves to stop the criminals' plans. 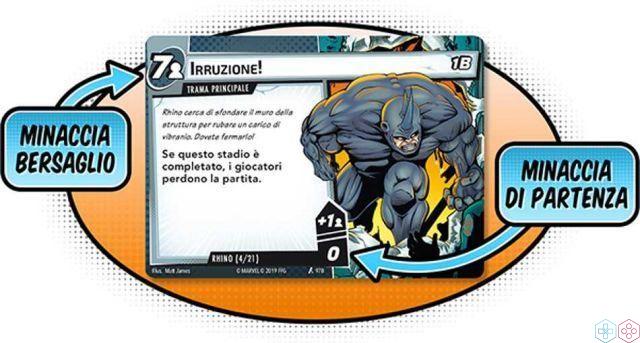 To thwart your plans, as we said, there will be criminals. Their plots will continually throw a spanner in the works (or you will, it all depends on your point of view) and you will need ingenuity, collaboration and a bit of luck to save the world. As a cooperative LCG game, no one controls the villains in Marvel Champions, but a script and a match deck will guide the actions of the criminal on duty.

Each super villain has a fixed number of threat tokens, representing the plans the heroes must foil. If the villain manages to place enough threat tokens on his main storyline, the heroes lose the game. To avoid this, each player will have to balance hero and alter-ego skills, and be ready for the criminal's attacks. Each turn, each player loses a card from the encounter deck that symbolizes thugs, tools and powers of the criminal. With good teamwork and a lot of preparation, you will be able to withstand every attack brought by the criminale and thus arrive victorious at the end of the game.

Marvel Champions LCG already teases us from the premises and we can't wait to try it at the fair to be able to tell you our impressions. While you wait, stay with us, more news about the game and expansions will arrive soon!

add a comment of Marvel Champions: the new LCG from Asmodee