There was some turmoil on the farm due to a storm, read the Rolling Ranch review to become a good breeder

Life runs smoothly on your ranch. Every day check that the fences and structures are in place, clean the stables and take care of your animals and like every evening go to bed early to wake up early and start your routine again. But one morning you wake up to find that a storm has put your whole farm in turmoil. Your job is to fix everything, fix what's broken and get your animals back with a simple roll of the dice.

The game consists of only four components, they seem few and yet they allow you to play Rolling Ranch for up to 20 players. Inside the box we find: 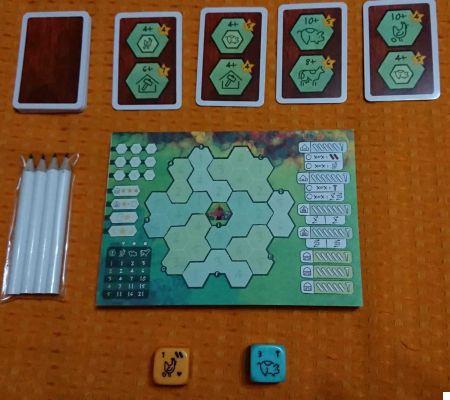 First of all, give all players a Ranch sheet it's a pencil. You can choose whether to use the Ranch sheet from side A or from side B depending on the layout of the enclosures you want to play with. Then you have to mix the Mission cards and you have to give one to each player; your card must be looked at and then placed face down because the opponents do not have to see it and it will remain secret until the end of the game. Finally, place i Animal dice in the center of the table. You are now ready to show your talent as a breeder!

How to play | Rolling Ranch Review

The players all play simultaneously. During the turn, a player rolls both dice and once the results have been seen each player can decide to do one of the following actions:


When you go to retrieve animals with actions 1 and 2, players can mark them in the spaces provided using symbols: the triangle for the hens, the circle for the pigs and the square for the cows. NB Actions written on the Ranch sheet cannot be deleted.

Life on the Ranch

Let's now illustrate which spaces the Ranch is composed of, what are the constructions that we can make inside it and how animals mate:

Last, but not least, are the Mission cards. These have two objectives marked above, the player can choose whether to complete them both, only one or none. Each objective you complete will give you additional points at the end of the game.

The game ends when one of the players has managed to complete at least all the enclosures on his Ranch sheet. Each player counts how many points he has scored with buildings, animals and enclosures, and of the latter, both completed and uncompleted points are counted. Vince whoever has the end of the game has the most points. In case of a tie to win the game is the player who completed his ranch first, if the tie persists the victory is for whoever has the most buildings and in case there is still a tie situation, then the victory is shared between the winning players.

Rolling Ranch is a board game by GateOnGames belonging to the category of roll and write, a type of game in which you have to roll the dice and report the results on a sheet. We are faced with a product that can be exploited at 360 °, because the box can be used as a convenient dice roll.

I PRO there are so many: the Ranch sheet with double side allows you to make the games variable, the fact of playing all at the same time eliminates downtime and makes the games faster, the box is not bulky and this makes it easily transportable, you can play up to to 20 players and this makes it a great game for large company of friends or to use during the holidays when the whole family gets together. Now let's move on to the AGAINST, are two really insignificant things, but that I wanted to point out anyway: the age, this is a factor that some parents look at and keep in mind when choosing a game for their children. In this case I find that the recommended age is too high, personally I think that from the age of 10 it can be played without problems. Finally we arrive at pencils, if we really want to be picky, then let's say that still a couple in the box did not hurt.