Crash Bandicoot: retrospective and curiosity about the original trilogy

Let's talk about the first three Crash Bandicoots in an unusual way: let's analyze the development and plot of the various titles in our retrospective.

If you are wondering why we intend to dedicate one retrospective (with annexes curiosity) to the first three Crash Bandicoot, the reason is simple. Going back to 2018, exactly one year after the temporary exclusivity for PS4, Activision accompanied the cross-platform launch of the N. Sane Trilogy with a real marketing campaign built from scratch. Given the simultaneous release on PS4 and Xbox One of the canonical sequel It's about time, however, apparently the arrival on Nintendo Switch and the native support of the next-gen do not guarantee the need to indulge in memories. And this is where we at techigames come into play. Fasten your seat belts, because with curiosities we do not intend to go slow.

It all started with a dog

As a first curiosity, the original development team N it was simply the stage name of two people: Jason Rubin ed Andy Gavin, the creators of the same Crash Bandicoot that we cover in our retrospective. The two took their name from their "naughty dog", literally "big dog" in an affectionate way, of the time: a puppy called Morgan, whose caricature was part of the original logo. In reality, the dynamic duo was already quite active, having already worked on titles such as Rings of Power on Sega Genesis / Mega Drive (hence the last extra level of the third game) e Way of The Warrior for 3DO.

Regarding the latter, to publish the title - which can be described as "Mortal Kombat according to Naughty Dog" - the two gave the publishing rights to Universal, who for their next project invited them to stay overnight in a bungalow in the immediate vicinity of Steven Spielberg in California. The basic idea was to create a platformer that combined the tropical setting of Donkey Kong Country with the character of Sonic, whose rear - for the sake of the in-game camera - gave the code name to the basic idea, operating on the only console where they would not have had competition: the first PlayStation. Simple, isn't it?

And the bitch bit his hand - Crash Bandicoot: retrospective and curiosity

Already in unsuspecting times Naughty Dog aimed to "turn every possible stone" in terms of hardware, since the first Crash Bandicoot - forerunner of our retrospective - was already able to stand out not a little in 1996. In reality, the history of development is a bit 'more troubled. Charles Zembillas, to whom we also owe the design of the "half-brother" Spyro, took over in the initial stages of character creation, including he vombato Willy which Butch Hartman (Fairly Oddparents, Danny Phantom) also worked on. The first sign of the complicated relationship between Naughty Dog and Universal came at the E3 presentation.

We know well that the then newborn videogame branch of the great Hollywood major has undergone various changes of hands, from the Vivendi group to Sierra and then to Activision. What not everyone may remember is Universal's left-footed shot at the developers. In fact, at the Los Angeles fair of that year, the publisher prevented actively to Naughty Dog to present itself on the stage, as if the revolutionary title (for the time) were exclusively his own work. The reprisal of the development team was not long in coming, with a separate presentation and distributing flyers like the one below. 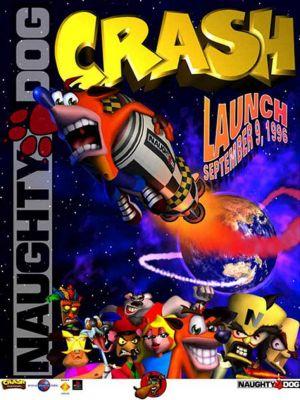 The basic idea, admittedly inspired by the Looney Tunes (and which, however, also combines the imagery of Doctor Moreau's L'Isola, if this arouses your curiosity) could just be limited to the first Crash Bandicoot; the time has come to bring the retrospective to the second episode, Cortex Strikes Back. The law of "the sequel is better", more evident with Mega Man 2, has not escaped the saga.


The series boasts a love-hate relationship with its own secret endings, because this time the canonical conclusion is the standard one of the first game; the opposite occurs between the second and third. Just as the final showdown of the previous title ended with Cortex falling from his airship, the introductory cinematic of the second picks up exactly from here. The canonical ending is the secret one, in which Nitrus Brio destroys the Cortex space station.

The protagonist's “mascot with character” appearance, however, required a particular marketing campaign in Japan. For the Japanese public, in the first game the composer Josh Mancell created unreleased tracks within a day for bonus levels and bosses Koala Kong, Pinstripe, Nitrus Brio, and Cortex himself. From then on, all the Japanese title screens would implement the song from the Japanese commercials, “Kurasshu Bandiku”.

In addition to new moves and vehicles, they made their first appearance in this sequel the crystals, a less difficult rescue system than the first game, Nitro crates and so on. The new settings are, theoretically, the same as the first one (plus the space), only during a harsh summer in the southern hemisphere. 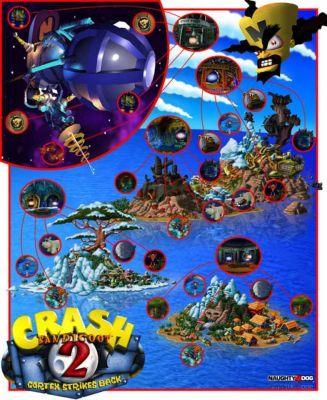 But you, Cortex, have let me down twice - Crash Bandicoot: retrospective and curiosity

You can understand, if you are curious about it, by reading the author's biography at the end of the article how important it is Crash Bandicoot 3: Warped in this retrospective. Just think, however, that where the second episode dealt with space, the third chapter is based instead on the concept of time (except in the Japanese version "adventure around the world", Buttobi Sekai Isshuu). This gave Naughty Dog an opportunity to experiment more with vehicles and variations on the theme, between a space-time gap and the other, meanwhile preventing Cortex and his new ally Nefarious Tropy from stealing crystals from past ages.


Naughty Dog's latest linear platformer was born from a period of great turmoil, while on the computers a few meters away Insomniac Games was working on the first Spyro The Dragon. Ironically this emphasis on vehicles and other amenities would be picked up two years later by the little dragon with Year of The Dragon, as Eurocom developed the fun - but less inspired - Crash Bash. In all of this, the canonical ending has been the "incomplete" one for years again, given the absurdity of the new prison for Dr. Neo Cortex and his new ally, Tropy. We believed so too, until the presence of Baby Cortex and Baby N. Tropy in Crash Team Racing Nitro-Fueled put some doubts in our heads. 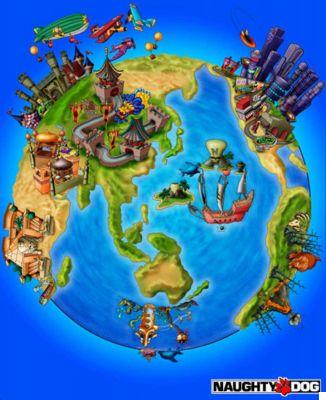 We were hesitant about opening a parenthesis for curiosities about CTR in our retrospective, but it seemed to us the best place to reconnect the origins of Crash Bandicoot to the modernity with which we will close the accounts. The original game was born as a simple alternative to Mario Kart 64, which still remains perhaps one of the worst-aged motorsport chapters for the Big N mustache.However, Naughty Dog had with Crash Team Racing the best opportunity to give our favorite marsupial the last hurray he deserved. And to say that the idea of ​​putting an alien - Nitros Oxide - as an antagonist was aimed at preventing the creation of sequels, because "no one else would take the saga seriously anymore".

The following years, despite the efforts of the talented guys of Traveller's Tales (now TT Games) with the original fourth chapter The Wrath of Cortex, have not been kind to the character. As an honorable mention, however, we cite the work of Vicarious Visions with his tetralogy on the Game Boy Advance. The quality level of these games has earned its original characters, such as N. Trance and the unlikely Megamix (merger of Cortex, N. Gin, Tiny Tiger and Dingodile), to join the celebration of the franchise that has been Crash Team Racing Nitro-Fueled, the remake that merged the aesthetics of the N. Sane Trilogy with the fast-paced gameplay of the 1999 masterpiece.

Despite the appearance of "minor platformer" of this icon in comparison to Mario or his counterpart from beyond the Alps Rayman, Crash Bandicoot 4: It's About Time it seems to us the best point to close this retrospective full of curiosity. At the expense of the excellent work done with Spyro Reignited Trilogy and, some time ago, even with licensed games, see the creators of Skylanders grappling with an ambitious unpublished chapter of the saga may have seemed a gamble to some. Yet, in every moment of the game shines through a love for the roots of the franchise that borders on the manic.

It may seem silly, but before now the only thing that the three "right arms" of Cortex had in common was the pun in their names. The insane biologist Nitrus brio, abbreviated N. Brio, gives us a homophone to the English word for an embryo. N. Gininstead, it sounds like engine. Doctor Nefarious Tropyfinally, it alludes to entropy.

Now, however, the three share the same roof as boss, while Tawna - the beauty to be saved, conceived only as (literally) "Pamela Anderson with a brain" - is now a stubborn adventurer able to stand side by side with its replacement, Coco "comfort zone" Bandicoot. We'll soon find out how much It's About Time benefits from the history of the series in terms of cast and gameplay when it comes out (again) Friday March 12, and in our review to follow.

Now it's up to you to tell us yours: was there any curiosity you weren't aware of? Let us know below, and as always don't forget to stay on techigames for all the most important news on the gaming sphere. For your gaming needs, you can instead find the best discounts in digital format on Instant Gaming.

Cyberpunk 2077: some secrets you may have missed ❯

add a comment of Crash Bandicoot: retrospective and curiosity about the original trilogy