We finally know what the addition "Bowser's Fury" to the Super Mario 3D World port consists of: a mix between classic and open-world power-ups, let's do a brief analysis of the new trailer

After a couple of months of groping in the dark, we can finally say it: we know what Super Mario 3D World + Bowser's Fury owes its new name on Nintendo Switch. Among the many announcements seen in the last Direct, in fact, one of the least talked about - thanks to the controversial decision to limit the availability of the most tempting games - was the port of the chapter born on the unfortunate Wii U.

We have put up (only mentally, fortunately) every possible conjecture about what could be hidden behind that so vague teaser, and we would never have dared to hope for a fusion of power-up-based structure and open-world exploration. Today we are going to do a brief analysis of what has been seen (and not seen) in the new trailer for Super Mario 3D World + Bowser's Fury.

Wrath of the Koopa King

The initial choice by the Great N to keep quiet about the new contents of Super Mario 3D World + Bowser's Fury could not go unnoticed, and it did not. In this new adventure we will take the reins of Mario, who in the company of Bowser Junior he will sling into a new mysterious archipelago. The island area will in fact reshuffle the graphic "assets" already seen in the base game. In doing so, the team also altered the level design to bend it to a more modern open-world soul, while maintaining the presence of the power-ups.

Any reference to Odyssey it is not accidental at all. Between the occasional implementation of linear sections and the presence of objects to be collected, the influence of the 2017 masterpiece is evident. One of the hottest comments on the subject is "Bowser's Fury is steeped in Koizumi's DNA." We will proceed with ours brief analysis after seeing "together" the new trailer for Super Mario 3D World + Bowser's Fury.

The trailer above contains two minutes of material, but despite the generous amount of gameplay we're not allowed to glimpse any interfaces. In fact, the video says a lot and very little at the same time - we wouldn't rule out the implementation of Bowser Junior as a kind of asymmetrical co-op, but at this point we doubt we will learn more in the remaining four weeks that separate us from the game. The dimensions of the map, so cryptic as to provide us with two possible interpretations regarding the substance of these new contents, preclude us from "exact" conjectures.

This mode, in fact, while allowing the collection of multiple "stars" to collect, sees the entire game world involved in the clash with "Bowser fury" (or "Bowser divine scourge" in Japanese). There are two cases: either there is a way to trigger the fight with the boss, or we are faced with a situation in the style of Smash Adventure (Super Smash Bros. for Nintendo 3DS) / City Trial (Kirby Air Ride). We allude to the hypothesis of a "scale" adventure to be experienced in one breath, assuming the relatively small open-world game world doesn't outnumber the island of Fortnite.

The way in which Bowser Junior follows Mario (and only Mario, since the level design focuses on its abilities), for its part, immediately confirms that we will at least be able to enjoy the company of a useful ally managed by the CPU. Obviously, his boss skills have given way to moves more suited to the player's limits; Auto Clown Jr.'s absence of flight, however, made us raise an eyebrow. The possibility of having a second player and of "dragging" him if he leaves the frame centered on the first is not new at Nintendo, and if we count the possibility of glimpsing new secrets with the Prince's brush, the scent of asymmetrical co-op it really is already in the air. 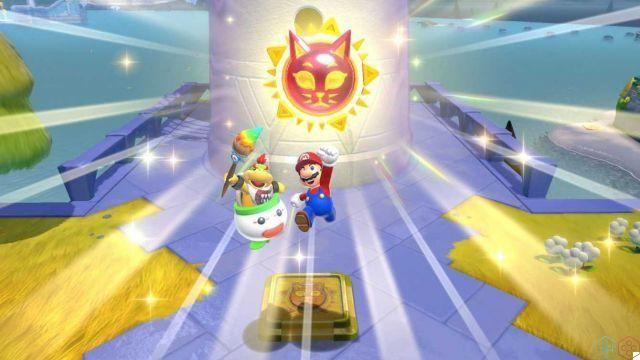 We infinitely appreciate how Super Mario 3D World + Bowser's Fury has dedicated itself exclusively to new content for this trailer, but also among fans of the Big N (who writes to you in the first place) there are some snorts. Not all the streaks of mystery have abandoned the new campaign (assuming that, given what has been said, it can be considered as such) and, despite the months elapsed between the initial reveal during the anniversary Direct and today, we can still say everything and the opposite of everything. This "on the pack the cake was bigger" situation had already been seen with Pokémon Sword and Shield; the idea of ​​doing an encore does not excite us.

We would be more than happy to see, perhaps when the time is right to review the new package, that Bowser's Fury is big and ambitious exactly what we imagined. Right now, however, the hypothesis of facing an experiment never out of its embryonic state - in a way not unlike Kirby's Blowout Blast on Nintendo 3DS - remains equally plausible. We would like to point out, for mere reporting purposes, that in its linearity the original Super Mario 3D World remains a first-rate platformer; however, adding the hybrid infant with Odyssey will have to prove that he inherited the latter's ambition before justify the full price. 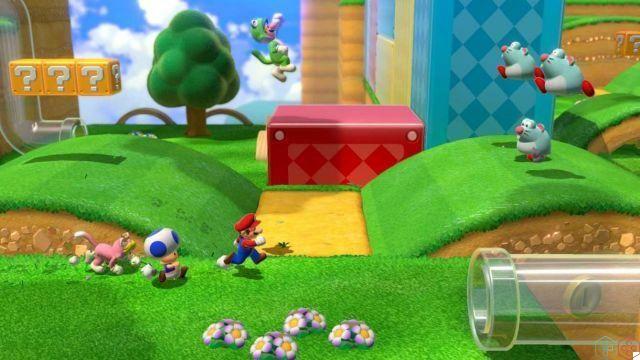 Discuss the supposed masculinity of the cherubs

The port's arrival on the shelves, as we mentioned talking about the four weeks, is scheduled for February 12, 2021. Now it's up to you to have your say: what do you think of what emerged from our analysis of the trailer for Super Mario 3D World + Bowser's Fury? Please let us know below by leaving a comment in the appropriate section and as always do not forget to stay on techigames for all the most important news on the gaming sphere and beyond.