Retrogaming and sequels get along well, and to prove it is Donkey Kong Country 2: Diddy's Kong Quest

We are towards the end of 1995 and on the world videogame market another protagonist has appeared that would have given birth to great sagas, and equally intense platformers, such as Crash Bandicoot, Spyro, MediEvil and so on. Of course we are referring to the first PlayStation from Sony, but we take into account that those were still the last months of the 16 bits.

This was in fact a playground where two other videogame houses were facing each other, on one side there was in fact the Super Nintendo Entertainment System and on the other the Sega Mega Drive, thanks to their two most famous mascots as Super Mario and Sonic.

The Big N, however, also had another character who, starting from the cabin cruisers, reached the SNES. A primate strong and stubborn who sported with pride, and a pinch of ignorance, a flamboyant red tie. Obviously our friend will also be resumed later with other titles dedicated to him and appearances, but this time Nintendo and Rareware they have seen fit to focus on his faithful friend. In fact, between November and December 1995, it arrives on shelves all over the world Donkey Kong Country 2: Diddy's Kong Quest.

A title that, in a very short time, became the second best-selling game of 1995 along with another sequel, that is, Super Mario World 2: Yoshi's Island. A game where, to be the protagonist of the story, was a "supporting actor" and is still today a great classic of retrogaming. So put on your lucky hat, it was always the nineties, stock up on bananas, dust off your SNES and let's go back to our favorite monkey island! 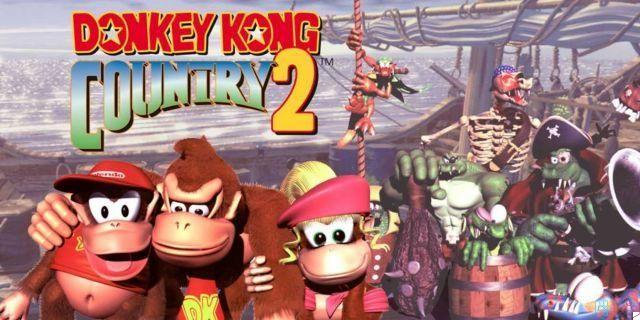 A first great adventure for the little ones

Like the first chapter of the saga, here too we have to thank Tim Stamper and cronies of the Rareware, an attempt has been made to make one even better similar three-dimensionality within a 16-bit console with two dimensions available. Of course the mission was perfectly successful and the gameplay was much more fluid and colorful going to marry very well with the fantastic soundtrack by David Wise.

Also, double bonus, the title allowed the little monkey with hat, to appear in a whole host of great Nintendo games. From his kart racing title to 3D adventures on the Nintendo 64, passing through various sports games, Mario Kart chapters and even Super Smash Bros.

In short, the pair of firsts that break everything has stood the test of time and still today they are among the most loved icons by Nintendo fans along with the legendary Super Mario, the brave Link, the intrepid Samus, the friendly Kirby and so on. But now let's see how our friend "behaved" in his adventure! 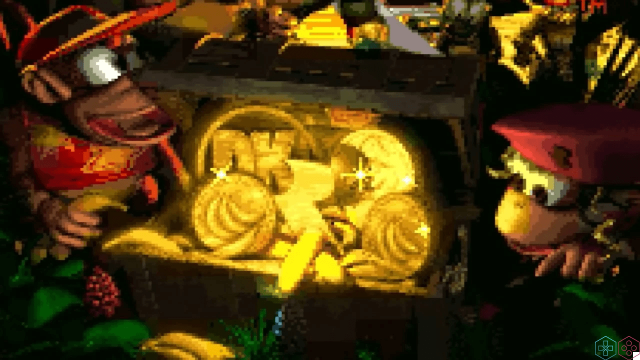 As you may have understood, here we are faced with another epic platform-style adventure where the protagonists are, precisely, our good Diddy and girlfriend Dixie (the following year she will also have her SNES title with Dixie Kong’s Double Trouble!) struggling with our old acquaintances. First of all, this time it's the good Donkey who gets kidnapped by pirate crocodiles and carried onKremling Island. The only way to make it free would seem to be paying a redemption, all the bananas from the island of our heroes, but the family doesn't fit in at all.


In any case, despite the grievances of family members, it will be up to our couple to fill the role of saviors and make Kaptain K. Rool and his crew pay for it of anthropomorphic henchmen. A rather simple story, and one that reminds us of Princess Peach in almost all of her abducted appearances, but which still turned out to be more than enough to engage the players. 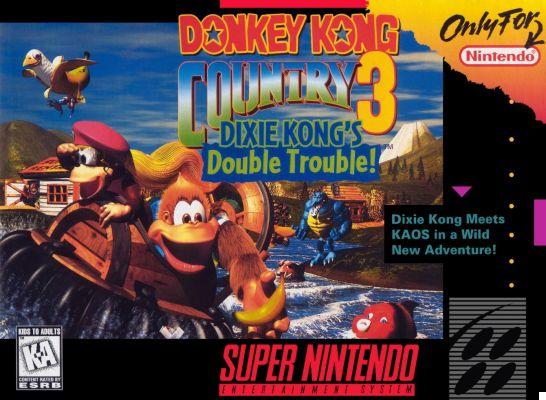 We already know our little hero a little, we can say the same thing about his Dixie girlfriend? Probably not! First of all it must be said that you can recognize it for its own pink dress, she also wears the hat, and for the long blonde braid which allows her to glide, grab hooks and even throw objects at enemies. All seasoned with the usual chewing gum always in the mouth.

Then continuing in the game you will find yourself in front of other characters who will prove to be particularly useful in the course of our adventure. In fact, we will be able to save our game thanks to the elderly teacher of King College, discover some tricks thanks to Cranky nel Monkey Museum and play nice mini games with Swanky. Then there will be the usual animals already seen in the previous chapter combined with new features such as, for example, a very nice snake which will allow us to make very high jumps and reach even the most distant platforms. 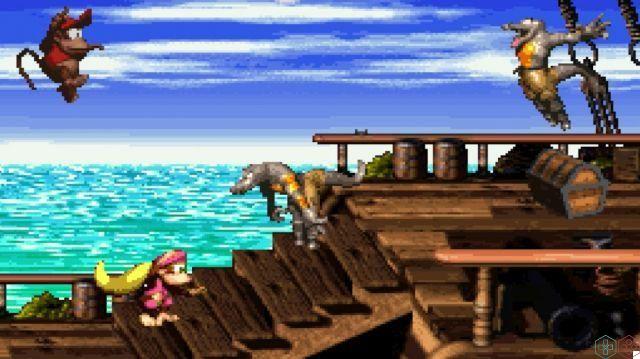 The adventure, to be played alone, in pairs or against, runs along Kremling's Island starting from the pirate vessel and exploring the various scenarios and levels that make up the title. Obviously, even for the two sweethearts it will be possible to "swap places" going to resume and improve the movements that characterized the previous chapter.

In fact, if previously it changed relatively little, here you can throw each other up or to the side to reach bonuses or other platforms. This will prove to be a key point to collect letters, bananas, but above all tokens to unlock mini games, get more information about the next areas, buy useful items and so on.

Then pay particular attention to barrels with the B! that indicate the different bonus zones or those that give one momentary invincibility in full Super Mario style. After all, we are always talking about a Nintendo title! It should also be remembered that depending on who completes the level, there will be two different celebrations. He will do a little rap with a giant stereo on his shoulder while she will perform a short electric guitar solo, practically the meeting of two different worlds of music. 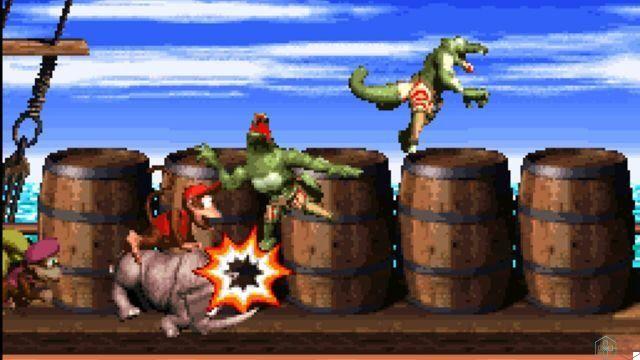 A little big absent in the SNES mini

After the success found on the Super Nintendo Entertainment System, the title then landed on Game Boy Advance in 2004 while, in 2007, was among the games available on virtual console. The point that left all the fans a bit stunned, especially during this last E3 where no new "simian" game was announced, were the titles already loaded into the SNES mini.

Full of exceptional and essential titles such as Super Mario World, The Legend of Zelda: A Link to the Past, Secret of Mana, EarthBound, Star Fox, the first chapter dedicated to the two primates, a handful of those of Kirby and so on, it seems that this adventure and the third have not found space within it. Really a great pity since, in the end, the SNES controller is the perfect element to relive all the emotions of this great platform of the nineties. 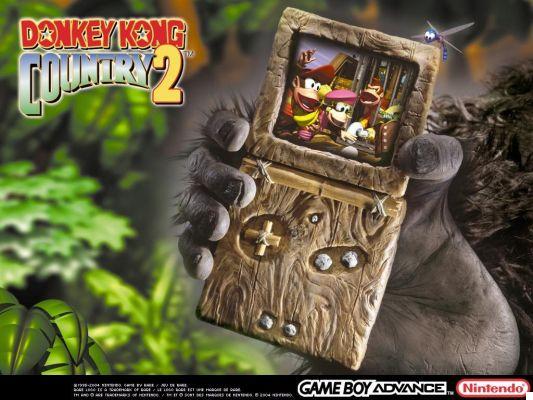 Drawing the final sum, Donkey Kong Country 2: Diddy's Kong Quest, it is a title that does not seem to “suffer” so much from its own 26 years. An even more fluid and complete gameplay, bright colors, crazy strategies, increasing difficulty and an irresistible couple of protagonists. After all, that's all it took to thrill a whole generation of retrogaming gamers and enthusiasts!

So if you also want to take a look at these crazy and "banana" adventures at the right price, click here, while, to be always updated on the video games of yesterday and today, we are always waiting for you here on techigames!

Retrogaming, Baldur's Gate: Dark Alliance and the other avenue of RPG ❯

add a comment of Retrogaming, to the rescue with Donkey Kong Country 2: Diddy's Kong Quest