Easy easy question, what is yellow and eats at will? But of course it's Pac - Man, one of the icons of retrogaming! Let's see a bit of his success story together

That's right, the dear old yellow ball which follows a ghost and fruit diet, now has little more than 40 years on his shoulders, but it is precisely for this reason that his image is still one of the best known icons of the entire world videogame panorama. Together with the good Super Mario (red) and the fearless Link from The Legend of Zelda series (green), also ours Pac – Man (yellow) is a symbol of an era of discovery, 8-bit, eighties, early colors on screen and retrogaming that never really went out of style. Indeed, it could almost be said that, nowadays, it is reliving a second youth thanks to mini consoles and digital packs for Nintendo Switch and the like.

As evidence of this statement there are still the nearly 300.000 cruisers around the world, appropriately distributed among bars, arcades and private collectors, where our nice yellow ball continues to eat undisturbed. Virtually a world-famous hit. After a practically incalculable series of sequels, remakes, conversions, appearances in other titles, quotes and references, the simplicity and immediacy of this "video game dad"Modern has never ceased to fascinate young and old.

But let's go back a bit in time, more precisely in 1980 or the so-called "prehistory of video games”, And let's see how a young developer of less than 30 years has managed to change the world. So this is the story of Tōru Iwatani and his most famous creation ever! 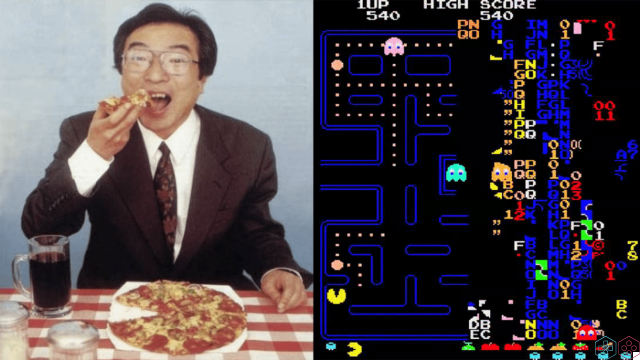 It all started with a pizza

We are Japan in 1980 and a XNUMX year old Tōru Iwatani is eating one pizza with colleagues when suddenly, as if suddenly, inspiration comes for a new video game. Looking down, in fact, the creator noticed that his pizza was missing a slice and this made him snap something in his head. In his mind, therefore, began to echo obsessively the Japanese word "pakupaku", an onomatopoeic term that stands for open and close your mouth, and that was enough for the good Iwatani to shut himself up in his office and start throwing down the idea of ​​Pac - Man, the future symbol of retrogaming.

A few months, a composer, a handful of technicians and a cabinet. Here is the future of video games, a very different title than the titles of the time like Galaxian or Space Invaders. This time there would be no aliens to be riddled with shots, but there were a battle with jaws and chases in a labyrinth. Moreover, and even this was an absolute novelty for those years, it would have been the first game with real interludes. So, if the way to play today is what it is, now you know who to say "arigato dome". But let's get back to us!

Initially baptized Pakkuman to "respect" the Japanese term, the title first passed from Namco for distribution at home and then to the Midway games (in the future it will return to be talked about with the Mortal Kombat series among others) for the American one. And it is precisely at this point that our nice friend officially receives the name by which he is known today. The name doesn't work, even when it was changed to Puck – Man, and there's a reason for that too.


The American company, in fact, pointed out how it was really easy to turn the letter P into an F creating a very nice play on words. In short, if it wasn't for "humor”Of the American public today our hero would have a slightly different name! Be that as it may, the success of his creature is immediate and immediately involves the entire globe, ending up in drain the players' coins of any nationality. Unfortunately, after this videogame revolution, Iwatani fails to stand out for other games relevant and ended his career at Namco after years of honorable service. Today it is a University professor at home, life sometimes ... 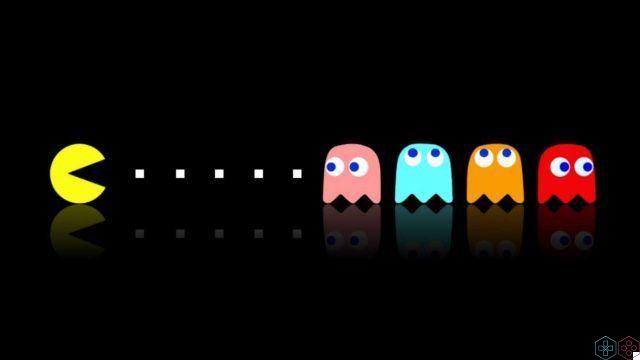 I seriously doubt that there is anyone in this part of the Universe who does not know how the game works, even in broad terms. However we can always do a little review. Our spherical hero will therefore have to face a whole series of labyrinths within which, while moving, he will continue to eat "paying homage" to the Japanese onomatopoeic term. However, it will be difficult for him four ghosts who will chase him all along his path, but if he eats a fruit the parts will reverse for a short period of time.

Among the special objects that we find in the game there are gods fruits (cherry, strawberry, orange, apple and grape), la Galaxian spacecraft Bell and key. All these elements have their own single score that will enrich the total one achieved by the player. As for the antagonistsInstead, they too have undergone a series of name changes and are now universally known under the names of Blinky, Pinky, Inky e Clyde each with its own distinctive color and abilities: 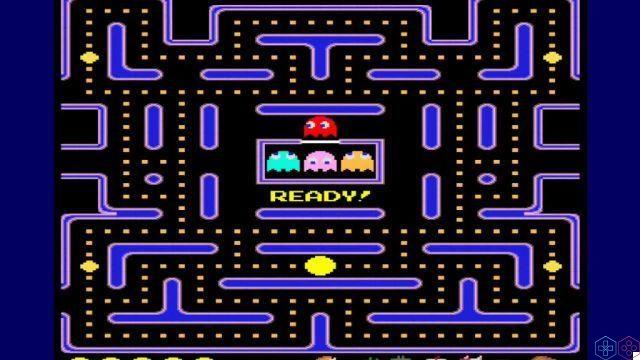 Obviously our nice friend has not always had an easy life and, in addition to the fateful ghosts, two other great obstacles have placed themselves along his way. One of these is the famous case of the conversion for the mythical console Atari 2600, the expectations were the highest ever, but the final result was so disappointing that it was one of the main causes of the great video game crisis of 1983. A crisis that, for the occasion, was also baptized as Atari Shock!

Le console limitationsin fact, there were so many and the emulation was a colossal fiasco. The colors were not full and vivid as in the cabinets and also the movements of the characters, in addition to their appearance which was more "deformed", were slow and clumsy. Including a really poorly crafted animation, the cartridge met almost the same fate as the ET video game, and a great many remained unsold.

As for the case of the level 256Instead, it seems that a bug made it impossible to progress beyond that point even though a little boy claimed to have succeeded. However, the bug was fixed with the version for MAME emulator and, in 2015, was published on mobile game who resumed the adventure from that point on. 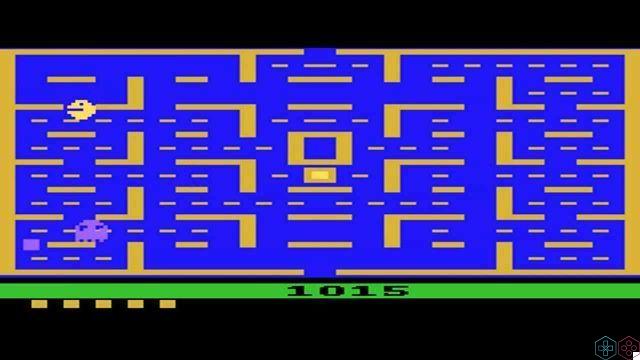 Have you ever noticed how that nice yellow ball appeared almost everywhere shortly after its birth? Like a worldwide success like that of the Beatles, Iwatani's creature was immediately the protagonist of his Cartoon, the same thing happened to the good Link with some rather questionable results, but that was just the beginning. After T-shirts, folders, stickers, posters, backpacks and so on, our ghost-eating hero made countless other appearances in the media. It would be impossible to mention them all and therefore I will limit myself to reporting only a few.

As for the animation, our sweet tooth appears, slightly modified, in the episode The Labyrinth Master / Maze Monster Zap Men during the first season (1990) of Tom & Jerry Kids. We then find it together with Space Invaders and Donkey Kong in the legendary Futurama series within the episode The game of If I were 2 / Anthology of Interest II (2002) where he plays the role of a general. 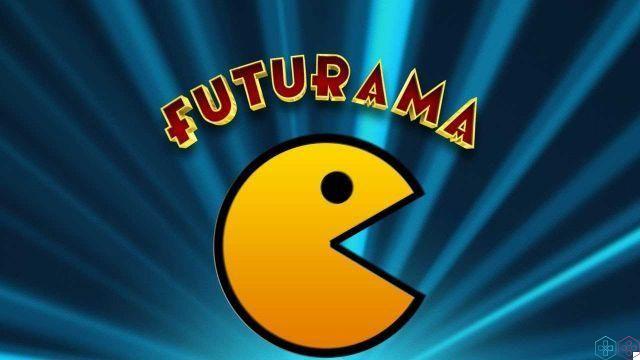 Finally, a double quote for the Griffins. In one episode, in fact, Brian the dog hums the song about "fever" on the radio from this game. It is one of the hits on the album Pac – Man Fever of the American duo Buckner & Garcia of 1982. In the album all eight songs are then dedicated to the video games that populated the arcades of the time. Remaining in the musical field, Caparezza he openly mentions him in his piece Abiura di me while, the musician and comedian Weird Al Yankovic, mangled the Beatles' Taxman song to bring out the most famous ball of all time.

Taking a brief look at the cinema we can recall the reason for his name change in Scott Pilgrim vs. the World while, in disappointing Pixel movie, we can see a quote from the gameplay in a scene from the film. It should be noted that its creator also appears here, only to be interpreted by Denis Akiyama, maybe he didn't like this movie either. Then there would be other elements like the Doodle di Google and a thousand others, but for these I gladly leave the arduous task of finding them all to you.

Obviously our hero has gone through practically all the existing consoles, among these unfortunately the Super Nintendo Entertainment System was missing. Also present in the package of games already installed inside the NES mini, the yellow ball continued to bounce from the cabinets to the houses, also passing through the smartphone and ending up among the playable characters of Super Smash Bros. in the edition for Nintendo 3DS e Wii U.

If you want to relive his adventures in more old school form then you have two options different. Either you can get your hands on an old cabinet that still works or get the version Connect and Play di Bandai Namco where, inside, you can play other chapters of the series along with other goodies like Xevious or Galaga. Alternatively, there is also a board game version, Amiibo and so on. So the choice is yours dear players! 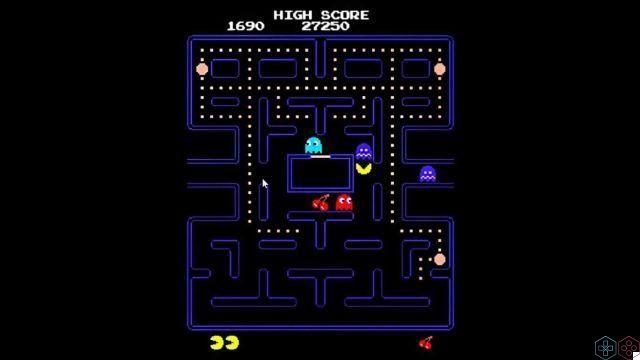 To be enjoyed until the last bite

I have to say that despite Pac - Man is the ultimate retrogaming icon, trying again its original version every time or the thousands of other sequels is always a great emotion. I am reminded of the crowded arcades where, to the sound of quartes and swearing, every effort was made to complete every single scheme. Seen in practically all forms, sauces, variations, languages, colors, sometimes even with rather disappointing results. Perhaps many today will find it a bit trivial, after all forty years have passed, but I believe that after a few games even the most skeptical will end up getting passionate to the title.

So if you are interested in taking a look at hers more modern adventures at the right price, click here, while, for always stay up to date on the video games of yesterday and today, we are always waiting for you here on techigames!