Sora from Kingdom Hearts is the latest DLC character: it's not a tutorial, Sakurai has achieved the impossible in Super Smash Bros. Ultimate!

The wait has finally come to an end: with the latest presentation of Masahiro Sakurai, we know it is Sora da Kingdom Hearts to conclude the roster of Super Smash Bros. Ultimate. The legendary game designer has reviewed many aspects of the character, from the moves to the scenario on the subject, also touching the release date and the costumes for the Mii Warriors (placebo of those who would have wanted to end the roster in another way). We leave you below the presentation, as always, but we will not fail to tell all the details in the right order.

Mii, what a hell (waiting)!

Predictably, Sakurai wanted to keep the suspense in favor of "just a couple" of elements for i Mii Warriors before moving on to Sora's debut in Super Smash Bros. Ultimate. Here too there is something to rejoice: after the latest "safe bets" such as the wig dedicated to Octoling e Giudigatto at Splatoon, we have perhaps the best possible fusiliers costume: the demon hunter costume, or DOOM Slayer, straight from… well, from DOOM (which, as Sakurai recalls, runs everywhere). The real torcibudella announcement, however, is that of the release date: 19 October, or a wait for Sora and company that will last a long time (two weeks).

As incredulous as we are, Sakurai interrupted (to show it in full at the end) the trailer for Sora in Super Smash Bros. Ultimate to devote himself to the moves. Before then, however, a confirmation that we all expected: Bayonetta won the vote for her inclusion at the end of the fourth Smash, but Sora is the overall winner as the most wanted character in the world. Not surprisingly, Nintendo at the time simply chose not to disclose the results. The pun with which Sora was announced speaks volumes: the character does not "join" only "the fight", but is finally here. Well placed optimism, in short. 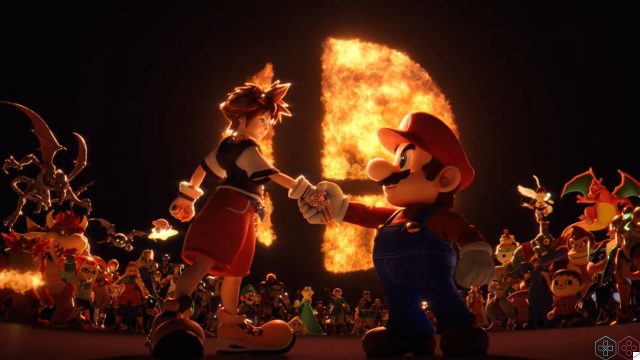 Since "Sora" means "sky", it is more than legitimate that this is one of the more characters light of the roster. It takes little to throw him away, but it must also be said that the hero of the Keyblade excels in aerial combat. Before moving on to the gameplay, the character also stands out for the variety of morals. Not only will we be able to control the variants of the first Kingdom Hearts, the second, the third and 3D, but we will also enjoy the mergers Value, Judgment (KHII) and Ultima (KHIII). Last but not least, we will also have a costume from the world of The Timeless River by KHII: the monochromatic Sora! 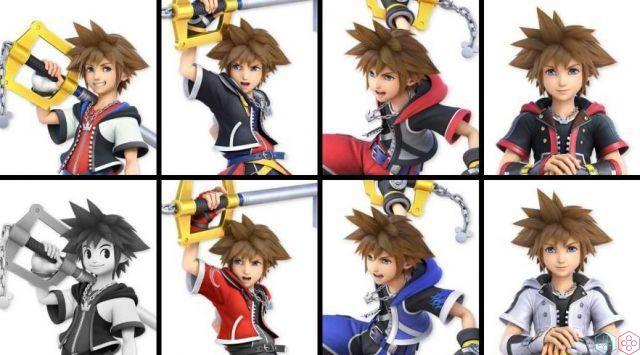 Sakurai also illustrated that the Spirits of Sora in Super Smash Bros. Ultimate will be five, one per design (not counting the mergers). Moving on further in the presentation, we also have the Spirits board: in order of power we find Kairi (only Beginner), Ventus, Land, Axel, Xion (Rising Stars), Aqua, Riku (Axis) e Roxas (only Legend). Of them, Aqua (played by Lucina) and Axel (obviously Roy) will boast the specific in parentheses in their name (as in Japan there is homonymy with other videogame characters). Let's get back to the presentation, because now we see some good ones! 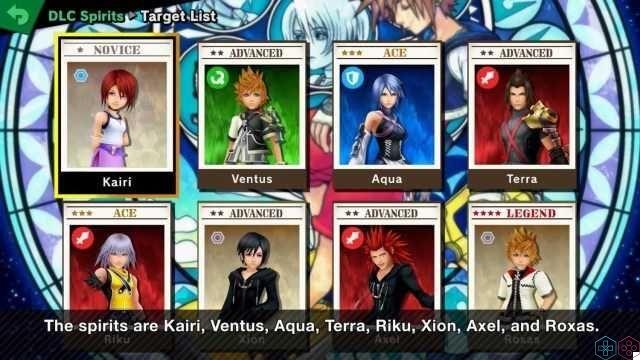 It is not true / that you are not capable / that there is no key - Sora, Sakurai's key in Super Smash Bros. Ultimate

Sora's attacks are more or less slow, but still easy to land. The jab (A, A, A or A long press) is the classic three-hit combo we love in the Kingdom Hearts series with the tasty addition of being able to use it in the air or even with a powerful side attack (↔ + A). The powerful up attack (↑ + A) swings the Keyblade for a quick hit, while the down attack (↓ + A) is a sweep. The side Smash attack (>> + A / << + A / ↔ + right analog stick) is devastating, while the top one (↑ + right analog stick) is at its best at close range (penetrating platforms). Finally, the low one (↓ + right analog stick) also acts as a dodge on the spot. 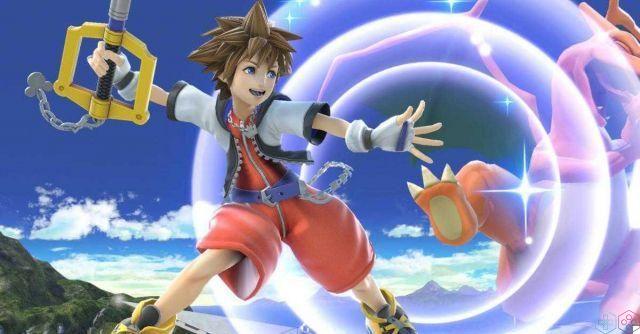 Kingdom Hearts III's Swoop (as Sakurai reminds us) is the basis for Explosive hurricane, Sora's downward air strike in Super Smash Bros. Ultimate. We gliss over the other aerial moves and throws to focus on the special attacks, all of which are hand-picked by the series they came from. 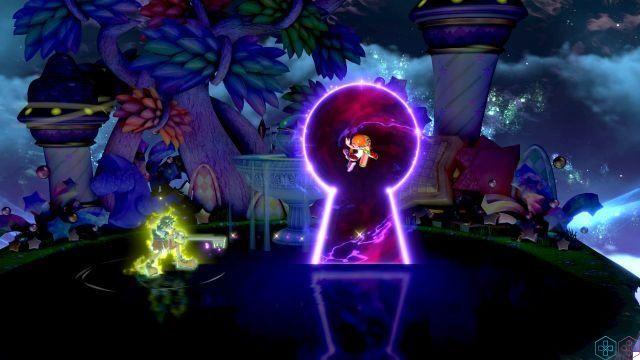 In the middle of our life's journey, we hit each other at the Dark Fortress - Sora, Sakurai's key in Super Smash Bros. Ultimate

Sora's scenario is there Dark Fortress, and for the joy of the competitive scene that despaired at the idea of ​​seeing "yet another swordsman", is a flat scenario. To be precise, it is comparable to The Ruins, only with one large secondary platform in the center rather than three small ones. In addition to the overview of the castle, however, the real gem lies in what happens when the battle comes to an end (by number of lives or by time). In fact, the platform is transformed into Awakening Station, while the background leaves room for Dive of the Heart, where the cameos of the characters on the windows are wasted (Sora, Riku, Roxas, Xion, Terra, Ventus or Aqua). 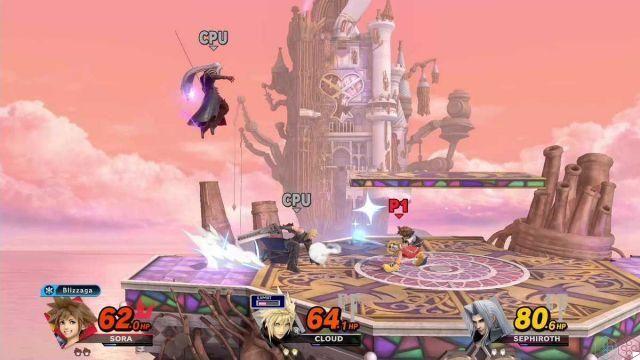 During the showcase, Sakurai showed a peculiarity of Sora in Super Smash Bros. Ultimate. Winning a battle in Energy mode, in fact, will recreate the slowdown at the end of the battle from the Kingdom Hearts series (before the announcer decrees the end of the match), complete with lock-on icons. THE songs in the series are nine: Night of Fate, Destiny's Force, Shrouding Dark Cloud, Hand in Hand, Blast Away -Gummi Ship II-, Hollow Bastion, Scherzo di Notte, Fragments of Sorrow and Awake. In addition, the victory fanfare is a rearrangement of Hand in Hand by Yoko Shimomura, but that's not all. 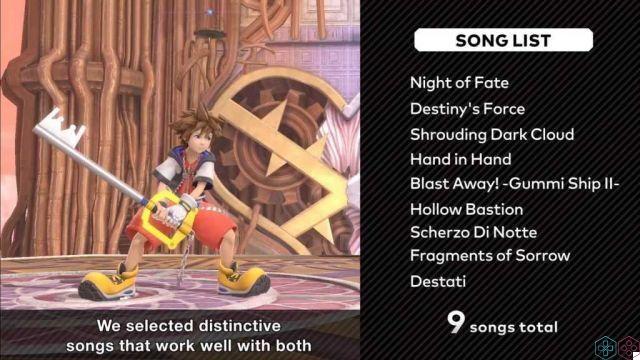 The cross-promotion, for once, comes in handy: it is in this presentation that Masahiro Sakurai revealed that not only will Sora arrive in the game, but the same goes for the rest of the saga on Switch… in cloud versionat least. Nonetheless, a free version of the Kingdom Hearts X Back Cover (offline) is now available on Nintendo eShop, and to support it we will see soon too Kingdom Hearts Union X Dark Road (offline too). And if you have Kingdom Hearts Melody of Memory, you can also add the swing version of to the Ultimate songs Dearly Beloved. 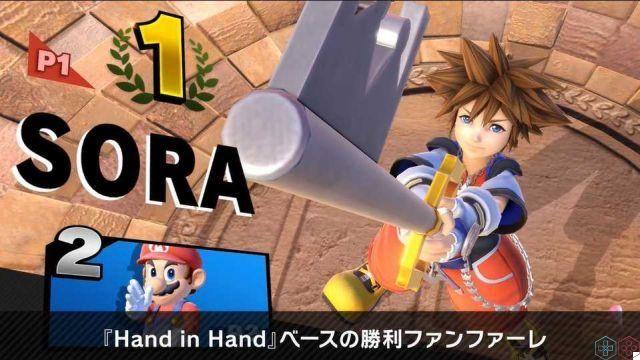 They are about to arrive amiibo also for the remaining characters, starting with Steve and passing through Sephiroth, Pyra and Mythra, Kazuya Mishima and, it is assumed, also Sora. Finally, the celebration of Masahiro Sakurai brought us back to the mind-boggling numbers with which his magnum opus will end: 89 characters (overall, counting the Trainer's Pokémon and the duo of Pyra and Mythra individually), 116 arenas, 201 tools, over 1100 songs, 1496 Spirits (to date), over 450 games represented, over 2200 characters from the world of video games in turn represented and 140 set per i Guerrieri Mii.

Of course, we will not fail to summarize Pyra, Mythra, Kazuya and Sora in the seventeenth and last episode (at least among the numbered ones) of the guide that has been keeping us company since February. Appointment, in this sense, for end of month!

Now it's up to you to tell us yours: what do you think of this latest addition? Let us know below, and as always don't forget to stay on techigames for all the most important news for gamers and more. For your purely gaming needs, you can instead find the best discounts in digital format on Instant Gaming.

The Art and Making of Control: a journey between the ordinary and the paranormal ❯