Forget about being a hero: in this review of The Last Torch we will analyze the RPG who will put you in the shoes of desperate adventurers in search of wealth and fame, while trying to stay alive

L'Ultima Torcia is a Serpentarium role-playing game released in November 2016, published by Asterion and created by Leonardo Moretti and Matteo Cortini, former authors of products such as Sine Requie, Alba di Chtulu and Anime e Sangue. In this review of The Last Torch we will reveal the (many) qualities and (few) defects of a product devoted to the return to the origins of the RPG.

The Last Torch review: a retroclone?

Let's start this analysis right away by saying that L'Ultima Torcia is a "retroclone", a type of games that imitate the characteristic style of those products released between the '70s and' 80s, such as A Look into the Dark and the original Dungeons & Dragons; this is even reflected in the packaging with which the game is presented to us, which in fact is sold in a box that recalls the “Red Box” of the first edition of D&D. Inside it we find the three game manuals, pre-filled pg cards and even a set of dice to play; everything you need for a neophyte of the genre is therefore already included in the package.

In this first part of the review of L'Ultima Torcia, we will talk about the regulation (contained in just 50 pages), the most striking element of this RPG is in fact its simplicity; few but functional rules to cover any kind of situation that will arise in the game. Each character has 8 characteristics, with which he will carry out the tests imposed by the game master, depending on the most suitable at that moment. To solve a test (called Test within the game) it will be sufficient to roll a ten-sided die and if the result is equal to or greater than 6, that test will be passed.

What is explained in a few lines is the basis of the game system and reflects its simplicity: there are no statistics to roll, skills, special calculations; the construction of a character in The Last Torch is a matter of minutes, an aspect of the game that is perfectly linked to his mood. In fact, if the rules of the game and construction of the characters are simple, it is the game itself that is difficult and often deadly: unlike what we have been used to in many classic RPGs, in LUT we will play the role of simple adventurers, whose life will always be hanging by a thread.

To give a concrete example: a newly created human Thief will have the beauty of 10 hit points, which will not be able to increase during its growth.

A sword strike in LUT can inflict up to 1d10 points of damage, potentially reducing the aforementioned Rogue's hit points to 0 with a single hit.

And by the way: the characters won't always be lucky enough to encounter simple sword-wielding bandits in their path.

The review of The Last Torch: playing as a team

The high mortality of the game leads us to highlight another very important aspect, namely the enhancement of team play and strategy. Anyone who plays The Last Torch for a long time will have to strategize with their party to avoid being overwhelmed.; the collaboration between the players is in fact essential given the scarcity of hit points, mana points and equipment that the characters will have available.

What it is necessary to highlight with this review of The Last Torch is that the players who approach it must forget to play D&D: here there are no beautiful and damned heroes from the dark past ready to launch themselves with drawn sword against groups of enemies, but only fearful adventurers able to face the dangers that lurk in the darkness just by staying together, and sometimes even that won't be enough. 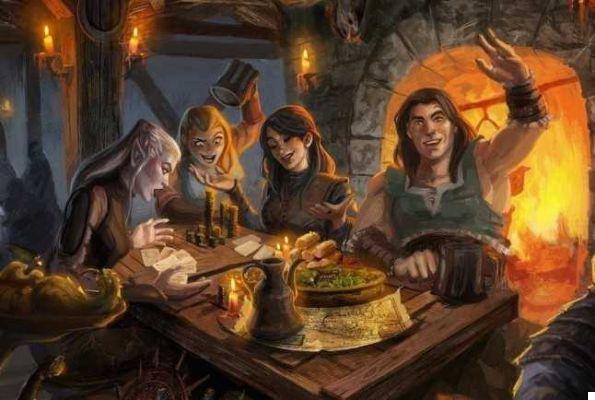 The playable races in The Last Torch are the most classic in the fantasy landscape, with the possibility to choose between elf, human and dwarf. Once the race and its bonuses and abilities have been chosen, it is time to choose a role for it among warrior, rogue, ranger, priest and sorcerer. Each of these roles fulfills a specific task in combat, but that is up to the players to discover by playing (and dying).

Roles provide a three-trait "double die", reflecting that character's skills; when you test with one of those characteristics, you will roll 2 dice and keep the best one. Finally, each role is characterized by its abilities, specific talents that indicate what a character is capable of doing.

Then there is the Value, which is a randomly chosen characteristic that will allow you to reroll the die if the result of a test that uses it is 1 or 2. Interestingly, it must be related to the character's background, so, for example, a warrior with the merit in the characteristic magic might have been raised by a witch. The merit is therefore the only narrative-like mechanics of the game and although marginal, it is very funny in its randomness and able to create more original characters than one might believe.

The setting that is proposed to us in The Last Torch is that of the Barony of the Griffin, the region where the adventures of our players will take place. Like the regulation, even the Barony is explained in very few pages (there are just under 50); it represents the most classic thing one would expect from a fantasy world: elves live in the woods, dwarves in the mountains and humans, the most adaptive, proliferate everywhere. A baroness controls the various cities that try to survive immersed in a land still for large stretches wild, full of dangers, monsters and magic.

There are no particularities in it and if this could be a defect for some, in our opinion it is actually a strong point; a setting that is too specific or particular, in fact, would have shifted the focus from the main objective of LUT, which is the survival of the characters in a familiar but decidedly hostile world.

The setting manual also presents seven adventures playable as if they were a small campaign, which however you will hardly play all with the initial characters. 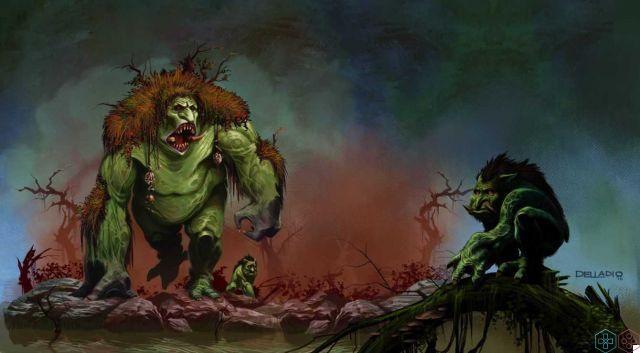 The last of the three stapled handbooks presents a fairly contained but complete and richly illustrated bestiary, often with really beautiful and detailed full-page figures. Leafing through it you realize that the authors have been careful to insert some very useful sections for each game master. The first concerns the treasures that can be obtained from a defeated opponent; the second instead explains how a certain monster behaves in battle. These sections are very useful, because they lighten the task of the game master, making the preparation of game sessions more agile.

While writing this review of L'Ultima Torcia I wondered what its greatest value was and why I enjoyed playing it so much. Reflecting on it, I came to the conclusion that LUT does what it promises perfectly, which is to create an RPG where players can never feel like heroes and that pushes them to always be ready to react to any unforeseen event or challenge that will place them in front of them.

Simple mechanics go perfectly with a deadly system that rewards the most tactical and collaborative players; elements that give great satisfaction when it is possible to overcome obstacles initially considered insurmountable with good planning.

If we do find a couple of flaws, some equipment is overpriced just to prevent players from initially having access to it. THEFurthermore, I would have preferred paperback manuals rather than simple staples, which do not do justice to the quality of the materials and illustrations.

Magic: Theros Beyond Death, pre-release kicks off this weekend ❯

add a comment of The Last Torch: the review of the old-school fantasy RPG