In our passion, collecting occupies a position of primary importance; we all have our altars, our weaknesses, and they are more widespread than you might think. Let's see what are the top 10 types of board game collectors

A necessary premise: like all lists it is a generalization and like all generalizations it leaves the time it finds. Live it as an exercise in self-irony, also because I am convinced that, like myself, you will find yourself in more than one category: let's take it lightly and good reading.

You know those epic, mammoth games, loaded with miniatures, materials, made up of three boxes and with an amazing price? Well we have all laid our eyes on it at least once, how wonderful plastic ... But the problem is precisely the price, which can go well beyond € 200 / € 300. Well, curiously, in the case of these purchases, the mechanism for reducing the perceived expenditure tends not to occur; when we buy something expensive, such as a piece of furniture or a car, we tend to not notice the accessory costs, or notice them less ... What do you want those 50 € more for assembly or those 80 € for polishing, if we spend them twenty times as many?

Well, in the case of these games, although the situation is similar, it is guaranteed that the buyer will try to propose the shipping costs and / or taxes to be paid by the seller. As if spending € 300 was fine, but € 310 was unacceptable ... How many of us have experienced exhausting negotiations with this type of collector for € 10 when perhaps it was a question of spending 200 on games?

It is a sacred right and also a duty to inquire before making a purchase, but we all know someone who exaggerates. Before buying a game, this person read guides, looked at reviews, maybe tried it at a fair, waited for us to buy it first or took advantage of the copy of the city playroom ... And then, assuming he wasn't bored with play it first, when he finally buys it and gets it, he won't even need to browse the rules! Maybe it was worth daring a few months earlier, right?

He has a lot of games, some maybe he didn't even have time to try them ... Yet he wouldn't sell one even under torture, not even the most banal fillerine, because by now those games are hers! He probably doesn't remember half of the titles he owns, but if he finds a game he forgot he had, his eyes will light up with reborn love… Only to drop it back on the shelf soon after. At home he doesn't even have room for a pin, but that's okay: he spent all his money on games and couldn't afford anything else anyway. 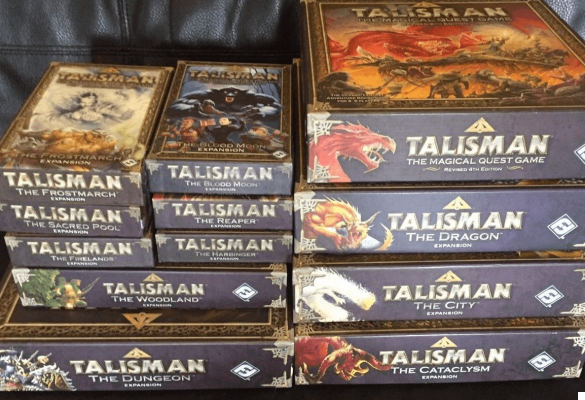 He / she will firmly deny it, and it usually has to be admitted that they get stuck in denial, otherwise they would have already gotten out of it. However, these folks don't just buy the base game, they have to get their hands on major expansions, minor expansions, upgrade packs, promos, exclusive content from trade shows and conventions, misprint versions, and even the panties the creator had when developed the game. Provided of course they are official and autographed (and hopefully washed ...)

They buy and sell games on various groups and markets at an impressive rate. It is common to see them combined with an advertisement one of the patented formulas:

It is also fair to observe that often these people are not professional retailers, in which case this commercial bulimia would be perfectly normal; however, the question arises whether they are actually players or commercial agents in disguise!

Collector 6 - The game speculator on Kickstarter

Of all 10 types of game collector, these are the most controversial figures. In fact, when they finance a campaign on Kickstarter, they buy more copies, with the intention of reselling them when they finally arrive years later. On the price it is better to overlook, let's just say that we could suggest it as a speculative method to our Government to smooth out a large part of the public debt!

There are those who love them and those who hate them: those who love them do it because thanks to them they can obtain limited edition games that were lost at the time, those who hate them do it because, well ... Someone claims to hate them on principle, someone because of the ridge they make, but let's not delve too far into this thorny ground. What is certain is that these speculators will put the games up for sale when they are already commercially available and must prepare to be inundated with an avalanche of photocopied messages "Hello, sep?" to which stoically they will always answer no.

When you have a game for sale and the shy buyer contacts you, the conversation goes something like this:
Ack. "Hello, price?"
We “Hello, it says in the ad, however X € shipped. I accept PayPal as payment "

Two days go by
A “Ah ok”
N "Are you interested then? Three of them have already asked me, please let me know "

Another day goes by
A "Yes" (note that nine times out of ten they write "yes" and not "yes", without accent; they use reflexive because they reflect for a long time, you can see)
N “Ok, xxxxx@gmail.com is my PayPal address. As soon as the payment arrives I send. Bye Bye"

One week later
A "Hello is still available?" 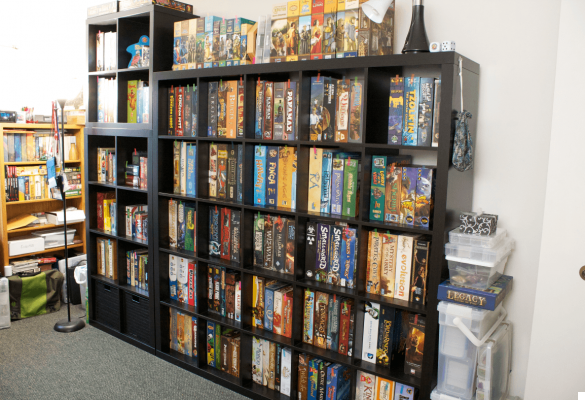 A true freak of order, this type collector most likely is on a crusade to arrange the games vertically and woe betide anyone who does otherwise.
Placed on Ikea's inevitable Kallax bookcase, its majestic collection is a feast for the eyes: every game has its own place, strictly not interchangeable.
This work of art becomes a piece of furniture and a source of pride both offline with those who visit his home, and online: complete with a caption "Hello, do you like my collection?", the shelfie of his library dominates our homes and in dedicated groups. 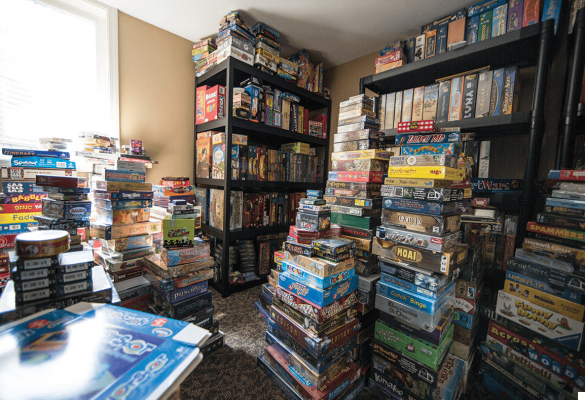 Contrary to the previous one, we find the pragmatic (to put it mildly). Often it has dice and components mixed up from game to game, with the boxes piled up in bulk and as it happens, possibly on the ground and in stacks at eye level. Its motto is "games are meant to be played": it is common to find unwrapped cards, inserts for miniatures that have disappeared from time immemorial and on social networks, they publish photos of the dies thrown into the fireplace. We must hope that the pragmatist and the shelfie maniac never meet, otherwise the consequences could be more serious than those of a clash between German and American fans ...

And finally, what you've all been waiting for… Our number 10 game collector is

Buy first, think later. Basically, it all comes down to this unfortunate sequence. It is the opposite of the conscious consumer, but it does much more damage. Shopaholic posts on social media are now famous, saying "I bought this game: how is it?"
Well, let's break a lance at least in their favor. As we have already mentioned, it is likely that at some point we have all recognized ourselves in each of these categories, even in the latter. Try to think if maybe they gave you a coupon and you didn't want any particular game, then maybe you would be more inclined to spend it on feeling. Or if someone has just entered the world of table games it is easy for them to fall into this behavior.

In any case, although it is actually annoying to witness these manifestations of playful superficiality, we should always try to be kind and understand that we only risk making someone feel bad by giving sharp answers.
After all, we all make mistakes!

add a comment of The 10 Types of Board Game Collectors