Are online board games video games?

Are online board games similar to video games? Starting from this provocative question, let's try to deepen the fundamental and founding traits of board games

During the Covid 19 quarantine we were forced to revise many of our habits; for us table players this meant giving up the evenings dedicated to our favorite titles. To face this sacrifice, everyone has found their own solution; However, the spike in access to Board Game Arena and other online board game platforms is undeniable. And so our evenings around a table have become evenings in front of a screen: what are the differences between a video game and an online board game?

Are online board games video games? Because yes

Undeniable, there are similarities. Sitting in front of a screen, we put ourselves in the same conditions as when we approach a video game, or a few hours of stillness and solitude (or cyber company). The examples of these situations are not necessarily all recent: let's think back to Solitaire, on the late Windows 98, as well as to Pinball. Both of these titles take company or analog games of undoubted popularity, transposing them into digital. Later, this list has undoubtedly been enriched, up to the present day, in which we have Boardgame Arena and the digital versions of the native games (think of Blood Rage and Tainted Grail). In fact, whatever the mode chosen, we are faced with a video game, it is even etymologically undeniable: a game on video.

Are online board games video games? Why not

The way video games are understood today allows us to make a distinction. The structure of online board games is inherently different from that of video games as they are designed to be physically played at the origin. We must be careful because we are entering thorny ground; in fact, the reverse process also happens and several traditionally intended video games are transposed into physical play (from World of Warcraft to Bloodborne, examples flock). The difference is that while a board game transformed into online retains the gameplay unchanged, or substantially unchanged, a video game that transforms into a board game retains the setting, but the gameplay must necessarily undergo an adaptation. So here is that the correspondence is not one-to-one and an online board game cannot be assimilated to a video game without committing a gross simplification. 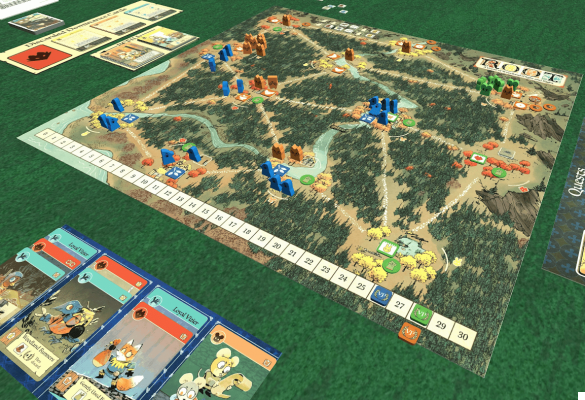 A digital image of Root.

What characterizes a board game?

The answers to this question are many, both in absolute terms and in comparative terms with respect to video games. Let's find out together what are the main elements, for the purpose of our analysis between online table games and video games.

The Third Element, or ET

The third element, which we will pleasantly call ET, is the component that is missing in board games, while it is present in video games. It can generally be identified in artificial intelligence and is what governs interactions between players. Whether you want to aim with a shotgun, open a chat window with another player or build an object, your action will actually, in all three cases, give ET a command. aiming with a rifle, chatting with another player or building an object, it will be your prerogative to perform these actions directly (more or less allegorically). In short, in other words: everything happens in a more direct, more authentic way and without a third wheel.

These two words characterize the board game experience far more than the board game itself. Without wishing to go too far into the anthropological, the human component, the commitment, or simply the effort to find oneself physically, even at the cost of journeys by car, rain, malaise, or any contingency, they start our game night in a much more meaningful way than turning on the PC or the console. In addition, there are likes and dislikes, gaffes, expressions, sensations, aromas, flavors and above all physicality that any digital pastime cannot boast.

AI and hybrid board games

The idea of integrating artificial intelligence into board games has fascinated hordes of authors, with mixed results. Some games make use of automated AI mechanics; think of the various dungeon crawlers such as Sword & Sorcery, or of titles in which the miniatures need to move independently such as Village Attacks and Zombicide. Other titles, on the other hand, have obtained integration with a real digital application, often with excellent results, for example in Descent or in the Houses of Madness. These cases we call them hybrids erroneously, if we accept what has been written up to now; they are in fact real board games, with no ifs and buts, in which ET and sociability meet expectations.

As a side note, there is a further sub-category of board games that originate online, but are played at the table. These are the so-called print and play that represent an economic and original diversion in this period of isolation. 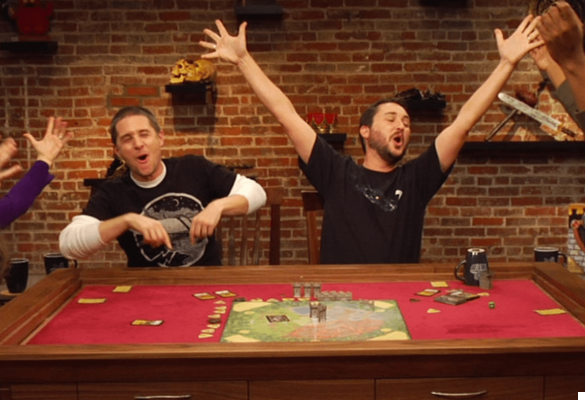 Online board games are not video games, but they are necessary

We have tried to answer the question formulated in the title, but the subject can be explored further. In fact, online board games in some cases offer unattainable possibilities for their physical counterparts, especially if it comes to improving your skills or the gaming experience itself. In this case, the considerations we will make will not be valid transversally for everyone, but only for certain categories of titles, as we will see.

Necessary to improve your skills

It is well known that to improve you have to test yourself with ever new challenges, but, assuming and not granted that the purpose for which you play at the table is this, doing it only "locally" is difficult. Let's think of board games such as chess: online challenges allow you to exponentially extend the audience of your opponents and consequently the gaming experiences. This feature generally applies to all table games that have an online counterpart and a fairly large following of players. Of course if you consider trump for example, playing "locally" is much more important, literally!

Necessary to get to the heart of a game

Let's think, for example, of Through the Ages, a title with a physical duration of several hours, with immense components and not exactly immediate preparation. When played online, this game transforms, considerably reducing its duration and also allowing greater flexibility and guarantee of accuracy. In short, in some cases the use of digital is essential to appreciate every facet of a board game; this is because it streamlines it allowing you not to get lost in preparation, cleaning, etc., and playing even fresher.

This article was inspired by the quarantine due to Covid 19 which, at the time of writing, is essentially at its peak in Spain. So one wonders how this experience of forced distancing affects our beloved hobby.

If we are to remain faithful to what has been said so far, we should say that we are playing board games, but we are not living the board games experience; this place of course that you are not lucky enough to be able to play around a table with whoever you have at home. In other words, the board game changes, becoming a moment of social gathering into a pastime; this transformation seems even more evident considering what has been written about a title like Through The Ages, which will no longer take us an entire evening seasoned with laughter, beer and pawns, but half an hour in front of a tablet while we wait for it to cook dinner. And we hope to return to the first kind of evening soon.

Inis and Seasons of Inis review: an unknown gem ❯

add a comment of Are online board games video games?