We are facing one of the most sensational successes of recent years. Check out the review of the base game of Root, the River Company expansion and the preview of the upcoming expansions The Underworld and Clockwork

The beating heart that pumps lymph in Root's wooded veins is precisely the asymmetry. This title takes it to very high levels, going far beyond the classic starting bonuses or different builds. In Root you will feel like you are trying a different title every time you switch factions: play styles literally have their own identity.

The vision of the Marquise's early game map is impressive: it occupies every space vacated by the other factions, that is three quarters of the board. Its game strategy is the most classic and timeless engine building; if her industry is left free to operate and is not contained from the very first game turn, the Marchesa can already celebrate: one of the most cheeky examples of early game domination ever. Meow!

The Dynasty of Eagles

True queens of the woods, these mighty birds of prey have the highest war potential. Starting at the corner, they will have to make scorched earth and restore their dominion; if they do it too quickly, they will find themselves wrapped up, with the risk of provoking a coup, literally. In fact, if the ruler in office is unable to keep his promises of expansion, he will be deposed; the whole dynasty will pay the very high bill (out of narration, if we fail to perform a pile of increasing actions every turn, they reset to zero and we have to start over). If everything goes as it should, the Eagles should try to limit the Marchesa and win in the mid game, before it's too late… Too late for whom? But of course for

The Alliance of the Woods

While the charming marquise and the royal eagles challenge each other with strokes of nobility and high lineage, the people of the woods pay the real consequences. Exploited and oppressed, a mismatched mass of species decides to join forces to overthrow the aristocracy: French Revolution, move. Unable to withstand a head-on confrontation with the regular armies of the two main factions, the Alliance resorts to guerilla warfare until it has gathered the necessary power to overthrow the oppressors. In other words, it is the typical unstoppable faction in late game, while in the early game phase it is almost non-existent; if left free to develop, it will be impossible to contain.

“Vagabond who are nothing else”, it would seem that the Nomads had seen us just right. Or perhaps it would be better to integrate with "Vagabond who are not with anyone else": yes, because, in a riot of asymmetry, this faction does not have an army, but is made up of only one pawn. In how many other games are you asked to face the armies of three players with a single piece? The vagabond does what we would expect of someone who lives his life with a little bundle on his shoulder: he makes do with what he has. He takes the "alms", that is the secondary products of the productions of others, and can even choose to forge alliances. It is difficult to contrast the vagabond in the traditional sense, and in the hands of a good player he will make MacGyver pale when with pans and lanterns he will defeat three armies by taking the shortcut to victory. 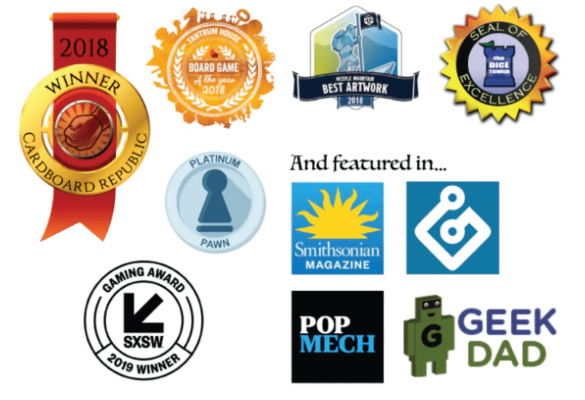 A shower of prizes and awards for Root

A masterpiece from every point of view… Or almost | Root Review

We are faced with a game that has a number of strengths on its side, starting with the gameplay. You are not wrong, it is a display of originality, of creativity that dares, of fluid and oiled mechanisms that fit together despite the very different shapes. There is also attention to the materials that, although distant from epic miniatures, can boast a good quality and the necessary to put the game in order is already included (always appreciable). The graphics are absolutely particular and at first glance it strikes more as unusual than as fascinating or flamboyant; and yet, it becomes loved over time, over time we learn to fully appreciate those apparently approximate drawings.

In the undergrowth there are also some rotten leaves

Given that the game as a whole would be forgiven far more than what we are about to list, it is however necessary to point out some details that can be considered defects.
First of all, the manual is not among the most accessible, also by virtue of the complexity and richness of the rules, but also for navigability reasons. Secondly, the balancing of the factions means that, due to the number of players, some factions give the best or the worst of themselves. Otherwise said, while the Marchesa is very powerful in a few players, she begins to lose ground when there are four (or more, with the expansions) at the table.


The same goes for the people at the table: you have to make sure that the less experienced are assigned the most digestible factions at that juncture, because Root amply rewards those who already have gaming experience. This is because it is not enough to have understood how your faction plays to get an idea of ​​the game, but to adjust properly you will need to have tried them all (or have seen them several times).

In this review of Root, however, we also address the expansion The Company of the River. Will it have improved or complicated the base game?

With this first expansion, the table is extended to up to six players, with the addition of two more factions. These are the Sect of Lizards, the mysterious hooded reptiles, and the Company of the River, industrious and friendly beavers: let's find out. 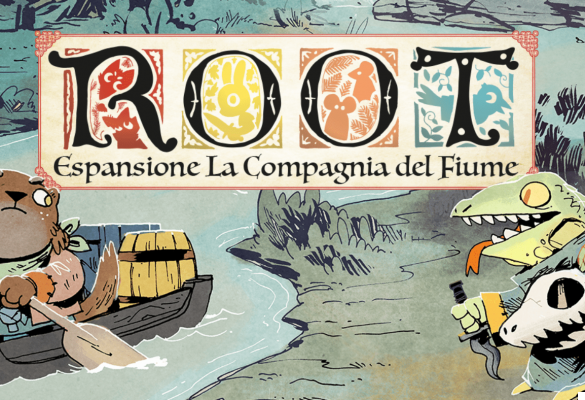 The Sect of Lizards

A faction with a particular gameplay to say the least, constantly looking for a balance between accumulating his powerful bonuses and spending them at the right time. It might seem easy, but the power and range of this faction are sirens to which it is difficult to remain deaf and we will always be tempted to dare more than necessary; Suffice it to say that the Lizards are the only ones who can destroy the fortress of the Marquise de Gattis, the epicenter of its industry, without having to make their way through hordes of hungry felines. However, they seem more prone to sensational actions like this, than serious candidates for the final victory… In short, they break eggs in the basket, but when it comes to getting serious, you get the feeling that they are far too inconsistent.

Have you always thought you were pretty good at negotiating and proposing yourself to others? This faction is for you. In fact, the Compagnia del Fiume, in addition to exploiting the watercourse that crosses the entire forest to move around, sells its services and products to the highest bidder. You may spend more time playing outside of your turn than during your turn, pointing out to everyone how much he could earn with this or that move (which of course you are happy to help him carry out for a fee). In short, brain intensive they would say in London, but with a high rate of involvement.

An ambitious expansion: successful or not? | Root Review, The River Company expansion

Overall yes. Surely making expansions on a base game that already seems to hold itself so miraculously on this bitter asymmetry, must be a real headache. Yet the authors managed to produce two more factions without generating any suspicion of reheated soup, there is no question of originality. Overall, the gameplay leaves some more doubts, confirming the already strong points of the base game, as well as those to be improved; specifically, introducing two such complicated factions, albeit in completely different ways and for reasons, makes an evening in which this title is proposed to an audience of new players even less likely. It is much more advisable to limit new arrivals to one or two people, to allow them to be guided where necessary and to be able to access the most "comfortable" factions according to the number of players.

While there is no barnyard-related faction, it is clear that this game is a real goose that lays golden eggs. The shelf price, high in relation to the materials, but justified by the quality of the game, makes it very profitable, or so you might think; it therefore seems natural that we do not want to stop here. 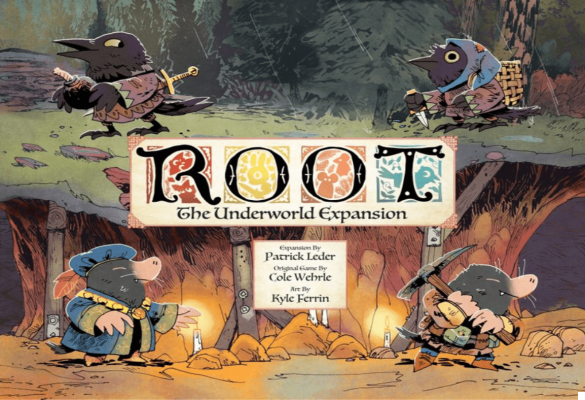 A year ago, in March 2019, Root's third expansion, The Underworld, landed on Kickstarter. While deliveries to backers are taking place in this period, with the related delays related to the Covid 19 pandemic, we can hope to find it in our trusted shop in a few months (between May and June). Since there has not yet been a way to test the game for the writer, the following is a simple "commentary" of what can be seen from the Kickstarter page, without pretending to act as a real review of the latest expansion of Root.

One has the impression of being faced with a much more impressive expansion than the previous one: beyond the purely aesthetic additions (alternative pawns, seasonal neoprene planks, soft toys, etc.) we find

Briefly, the two new factions are “The Corvid Consipracy” and “The Great Underground Duchy”: crows and moles appear in Root. The trademark of Cole Wehrle seems to be confirmed (the author changes, ed): each of the two factions will have completely unique play styles and unrelated to the others. Other interesting elements are represented by the new maps, each with peculiarities, which question the setting in which Root was born, that is the forest. Interestingly, during the campaign, the most fans were able to download the print and play versions of the game in development and provide their feedback.

What was originally intended as an addon to The Underworld was later released separately, and the first copies are expected to start circulating in Spain shortly. This is the attempt to automate factions (hence the name, which gives a bizarre steampunk note to the animals), thus allowing the cooperative and the solitary. Such was the success of this title, that it had to bow to commercial rules, despite the original spirit of the game being anything but. As for The Underworld, of which it is precisely a rib, there was no way to try it, but of course, as soon as it is commercialized, it will be remedied with a review of this latest expansion of Root. 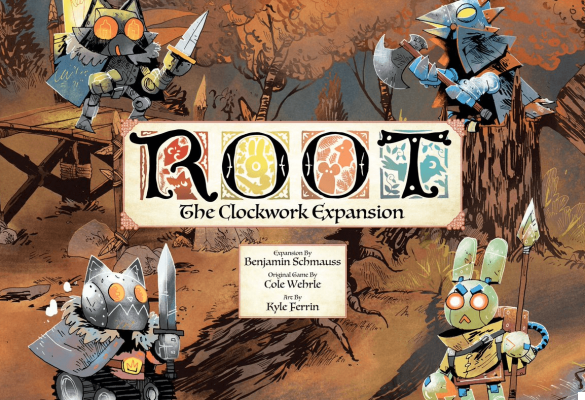 9 One of the best asymmetrical ever

add a comment of Root Review and Expansion The River Company