Review Timeline: learning while having fun

Do you know when the bee appeared? Do you know the release date of Star Wars or that of the creation of Facebook? If you don't know how to answer these questions, you don't have to give up, because you can learn them by playing Timeline and how you can find out by reading the review.

How many times during the school years we had to memorize the dates of discoveries, inventions and historical events and everything was complicated and boring. Now, thanks to Timeline, we can learn all these things while having fun.

Timeline is a card game, where it is purpose is to run out of cards in hand after placing them in the right chronological position.

What's in the box and how to play? | Review Timeline

Depending on the edition we buy, we can find a different number of cards. In the edition with the round box there are inside 55 cards, while in the one with the square box we find it 110. 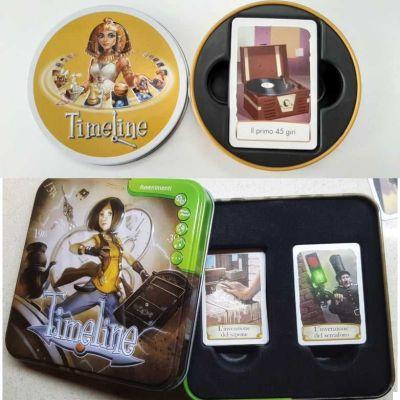 To start playing, we must first switch from game setup:

Let's move on now to the game rules:

NB It can happen that two cards have the same date, in which case they are simply placed next to each other and you don't have to worry about their order.

The match can to end in two ways:

Timeline is a game fast, enjoyable and fun. It is suitable for playing when you want to play something, but you don't have much time.

I titled the article "learning while having fun", because I find that this game can be useful for learning new notions and training on memorizing dates for those who still go to school. The Timeline series, because it can be defined as such, is made up of various editions that deal with different topics, some of which are: cinema and music, inventions, events, historical events. Then there is the classic version (of which I put the photo at the opening of the article) which contains a little bit of all the themes.

A small clarification regarding the table of pros and cons that you find at the bottom of the article, you will see written in both parts longevity, this because? I'll explain it immediately:

7 By playing, you learn!

add a comment of Review Timeline: learning while having fun