Did an ugly and evil witch throw a mischief at you? To protect yourself, just have a pig and read the Witch and Pig review

Witch and Pig is a nice party game from Little Rocket Games in which "ugly, dirty and nasty" Witches attack you, throwing you at the strangest feats of their repertoire. Your aim is to protect yourself with counter-spells or by sacrificing your Power Pig in order to stay in play until the end. 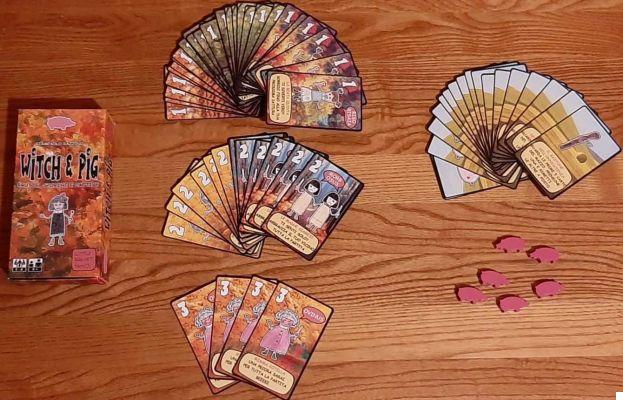 First, shuffle all the cards together, both Jester and Tackle, creating a single deck and then deal out 6 cards each which is the maximum number a player can hold in their hand. The remaining cards are placed face down in the center of the table and form the draw pile. Each player must also be given a Pig of Power. Now everything is ready, you just have to choose who will be the first player.

How to play | Witch and Pig review

During your turn you can do two actions: the optional one to play a card, Iettatrice or Action, and the obligatory one to draw a card. It is important to remember that once you have drawn a card it is no longer possible to play one, because this action marks the end of your turn. Then the game passes to the player on your left, except when one has been played Joker card and in this case the turn passes to the player who was thrown the act, the game then proceeds clockwise. You can hold a maximum of 6 cards in your hand (you can't keep more and you can't be without it) and if you want to draw another card you are forced to play one first. At some point in the game it may happen that the draw deck runs out, you can reform it by shuffling the cards from the discard pile.

When you suffer a misfortune, you must perform the effect written on the card. If you don't, you must take a penalty, ie you must discard one of your cards.

How is it lost?

The only surviving player who remains in the game until the end wins, whether he still has the Pig of Power or not.

When you throw a mischief you must say its name aloud and the player who suffers it must discard a number of cards equal to or greater than the value of the card thrown. Then either you suffer the effect of the hiatus or you counter it with an Action Card or the Pig of Power. If the opponent responds, the thrower can draw a card and his turn ends. If, on the other hand, the opponent cannot defend himself in any way, then he leaves the game and the turn passes to the player to the left of the one who launched the act. There is a special case in which you can double the misfortune, if you have two cards in your hand with SIAMESE WITCHES you can play them together adding their value and obtaining a misfortune of value 4.

There are 6 types of action cards:

The Pig of Power

This nice friend represents your source of energy and is the sacrificial victim that you can use when a misfortune is thrown at you, but you have to think carefully about when it is the right time to use it because you only have one. 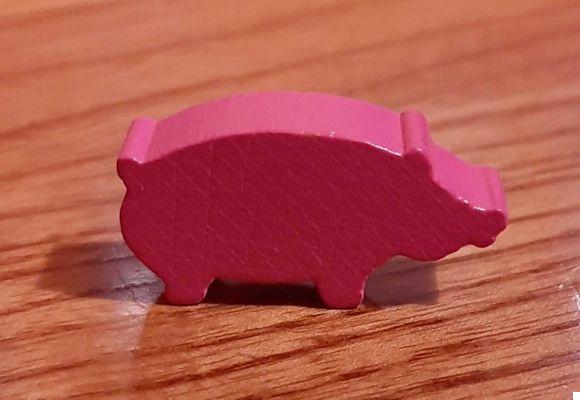 First point in favor of this game: if you combine two copies the fun doubles and you can play up to 12 players. Witch and Pig is an excellent party game with simple mechanics and impeccable components, the cards are resistant and have drawings and lettering in relief and the Pig of Power tokens are really cute. This game blends luck and strategy to perfection. A small point against it are the names of the cards and the descriptions because I would have preferred something more nice and fun, but this is obviously a personal opinion.

Tsuro review: follow the path… the right one ❯

add a comment of Witch and Pig review: wacky jokes and power pigs