In Marvel: The Infinity Gauntlet you can be among the heroes who will save the world or be the one who will destroy it, here is the review

Eight years after the classic Love Letter, Marvel: The Infinity Gauntlet - A Love Letter game, also distributed by Asmodee, was released in Spain this summer. In this new role, Love Letter catapults us into the Marvel Universe, at the exact moment in which Thanos is about to retrieve the Infinity Stones. In this game you can choose to be among the good guys and save the world or be the bad guy and destroy it… with just a snap of your fingers.

The package is small and all the components are contained inside a purple fabric bag with a print of the Infinity Gauntlet, inside this you will find: 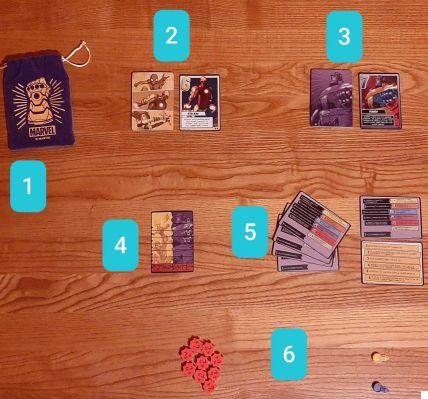 First of all you have to choose who will be the player who will play the part of Thanos, the other players will consequently be the Heroes. Each player must then be given a Reference card, the Heroes must hold it on the yellow side and Thanos on the purple side. At this point you have to shuffle the 16 Hero cards that will be placed in a single deck face down next to the Heroes, from this deck they must draw one card each. Then also shuffle the Thanos deck from which the player playing him must draw two cards. Finally, place the Power tokens in the center of the table within everyone's reach and next to it also place the Life Track card on which you must place the two indicators, the yellow one goes on the uppermost space on the side of the Heroes, while the purple indicator goes on the total number of players (Heroes + Thanos).


How to play | Review The Infinity Gauntlet

Thanos will always be the first to start and the game then continues clockwise. During their turn, each player must draw a card from their team's deck, the Heroes must always remain with only one card in their hand and Thanos with two. During your turn, whether you are good or bad, you must draw a card and choose from your hand which one to use. Each card has its effect written at the base, in the instruction booklet you will find the effects written in more detail. When you play a card it is placed face up in front of you. During the game, the Hero players receive information about what Thanos' cards are, but they cannot communicate openly with each other and can only make considerations on information that everyone is aware of. The instructions include the variant for 2 players, the difference is that the Hero player has to take a double turn after Thanos' and that for some cards the effect changes slightly.

How lives are lost

During the game, you can lose a life in two ways:

Some cards give the possibility to receive one or more Power tokens, these have the function of increasing the combat capacity. How are they used? Simple! If you have been involved in a fight, you must use a Power token, if you have one, to increase your card number. For example, if you use a 5 card in the fight, adding a counter will give you a +2 and consequently your card will become number 7. It is possible to use only one counter per fight.

The game can be concluded in 3 ways:

I start by saying that I do not know what the differences are between this version and the original one of Love Letter and therefore I will not be here to make comparisons, the only indication that we are given about it in the instruction booklet is that in this version no player he will find himself having to exit the round. As the first Love Letter game I tried I have to say that I was not sorry, I played it with both two and four players and in both cases the game worked well, but I believe that its maximum can give it with all six the players at the table. The components are well made and durable and the card effects are well balanced with each other. To better appreciate it, you need to do more than one game, because in the first ones it is difficult to team up with the other Heroes since everyone has to get into the game mechanics well and therefore we tend to rely on randomness.

Kingdomino Review: Create the most beautiful kingdom in the whole realm ❯

add a comment of Review The Infinity Gauntlet: A Love Letter Game