Kingdomino Review: Create the most beautiful kingdom in the whole realm

Have you always wanted to be a king with the most beautiful terrain in the whole realm? Good! Kingdomino review is the one for you

Kingdomino is a game published by Blue Orange and distributed in Spain by Oliphante2. This is a small game that has however won great prizes, such as the Spiel des Jahres 2017, and has also received a nomination at the As d'Or -Jeu de l'Année - Cannes 2017. In Kingdomino you are kings who have the goal to build the most beautiful kingdom in the whole realm and to possess all the same territories.

The components of Kingdomino are:

With regard to weave, are divided into 5 different types of territories: wheat, meadow, sea, forest, mud and mine. Some territory tiles have crowns drawn on them, from a minimum of one to a maximum of three, which are used to accumulate points, but we will see this later. The purpose of the game is to be able to connect their tiles in such a way as to be able to form a realm of 5 x 5 boxes and accumulate more victory points. 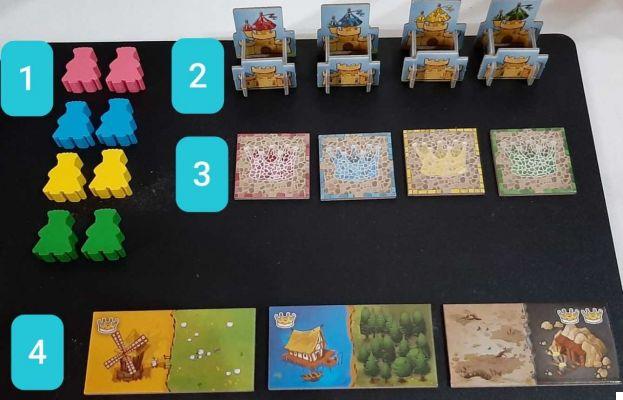 
To start the game, take the following number of tiles from the draw pile:

Arrange the dominoes on the number side and in ascending order, then you can flip them on the landscape side. Now it's time to place the meeples on the tiles, choose the first player and in clockwise order each one will have to place his meeple on a tile of their choice (one per tile); this mode is valid only for the first placement. NB in ​​case of a game with two players, each player will place two meeples of their color alternately. After making the first placement, place more tiles next to the first ones. It's time to play!

How to play? | Kingdomino Review

From the second round onwards, the choice of tiles is made according to the order in which the meeples were placed in the previous round. Two actions are performed during the turn:

The realm must be 5 X 5 squares, a tile is made up of 2 squares. It is possible to play a card if:

If a card cannot be connected, then it must be discarded. The tiles must necessarily remain within the 5 X 5 space, but if due to an incorrect placement you find yourself exiting that perimeter, then you are forced to eliminate one or more tiles without getting points.

During the last turn you only perform the action of placing a tile in your realm, without choosing another one. It may happen that some realms are incomplete because the conditions suitable for placement have not been met. The points are calculated based on the number of crowns per territory multiplied by the number of tiles, of the same territory, connected to each other: for example if our realm is made up of 6 forest tiles and on one of them there are two crowns, then we have to do 2 × 6 and we get 12 points. Uncrowned squares that are disconnected from other tiles with the same territory are worth 0. Then the points of each territory containing the crowns are added up and this is the score that will determine the victory. In case of a tie whoever has the largest realm wins, if the tie persists whoever has the most crowns wins.

The following rules can be added to the basic rules to make the game more interesting:

Kingdomino is a perfect filler. It is a game suitable for families, for those who want to start approaching board games. The speed with which you can start and with which you play the starts, allows you to use it in the dead time where you want to spend time in a pleasant way or even after playing a heavier game, to lighten the evening. It may not be loved by those who prefer more strategic games, because Kingdomino is mostly based on randomness. 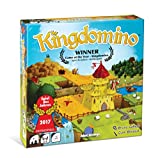 add a comment of Kingdomino Review: Create the most beautiful kingdom in the whole realm