Classifying board games: our guide

Have you ever wondered if games can be classified? Of course yes, and techigames is ready to guide you in this more… theoretical world!

We have a game in front of our noses and we wonder if it will be able to satisfy our evenings of fun. We think: do we like to be in full control of the situation or leave it to chance? Do we want to play alone or collaborate with others? How much do we care that the game simulates reality? Are there any game strains? Read on to find out.

Basically, you can classify a game on the basis of randomness, that is chance, luck: do we like the game to be decided by chance? Or do we prefer to control the game as much as possible?

The randomness is not necessarily related to the roll of a die or the drawing of a card: it can also be groping because the elements in the possession of the opponents are not known (cards, bonuses ...).

The game of the goose has a very high randomness, no strategy is determined and the only element in its possession is the value of the dice (which, moreover, is not controllable). Even classic card games are highly random and allow a low strategy (Scala40 and Pinnacola when there are many cards on the table; Scopa if you keep in mind the cards released…). The RisiKo! and Monopoly certainly have a random component (dice, reinforcement cards), but a -good- game is mainly based on strategy, while Trivial Pursuit bases the ability to win on one's knowledge: of course, the dice is present, but in any case all questions must be answered… Naval Battle starts as a completely random game and then offers players more strategy options. Chess, Checkers, Go, Fillet ... all have a null random component, and expert players can come to predict the opponent's moves.


Category 2: Control of the consignment

Randomness it is strongly connected with the control of the game: the higher it is, the less control the participants have, the less strategy one can engage in. In particular, the random component may also depend on the amount of information the player has about the game. Here, with more mathematical terms, a game can be classified based on the information available: it is called a incomplete information if each participant has partial information on the state of the game. In Scopa you have a high degree of control if you keep in mind the cards released, but the uncertainty (draft) remains, while in Pinnacola or Scala40 the information in the possession of the players increases as the game progresses. RisiKo! it is incomplete information because the objectives of the opponents are unknown.

When you have full knowledge of the game context and possible opposing strategies, we talk about full information game: the Chinese Morra (paper-scissor-stone) belongs to this category since each challenger knows the context of the game (ie the consequence of his own play) and the possible opposing strategies (playing stone, or paper, or scissor). But the strategy that the opponent can adopt is not predictable! This is why the category of perfect information games, ie complete, plus the knowledge of all the moves made up to that point by the opponents (and on which to base a strategy): Chess, Checkers, Go, Fillet… belong to this category.

Nothing to say, some games allow diplomacy, that is, having to interact to find a common goal, and as such they can be classified: unexpectedly Monopoly has diplomatic aspects when two players exchange land, in order to reach - for example - both to a terno of land and to be able to build. Some stages of Munchkin involve the use of diplomacy.


Diplomacy is a factor outside the rules, which depends on charisma and persuasion: in a broad sense in Poker diplomacy appears in knowing how to deceive or bluff opponents. 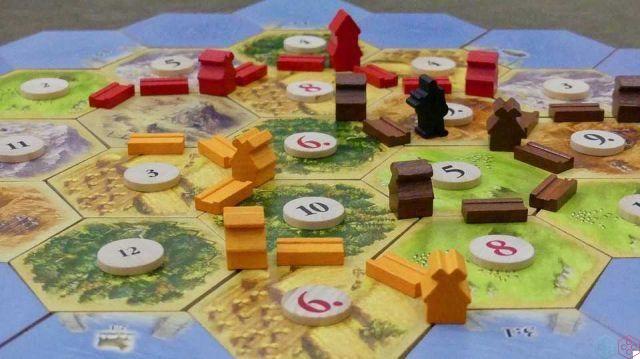 Here we are now having to classify according to the two great families of games: German and American.

The German games are a family of card or board games with very specific characteristics, born from the 80s. The German style has spread to producers all over Europe, so we can also speak of Eurogames, or Eurogames. In any case, Germany is king, and the prize for the best board game is in fact German: it game of the year.

German games are designed for families: they have wooden components, sturdy displayboards, short duration (30-60 minutes): they are designed for evenings at home with boys and girls. The random component is based more on the drawing of cards rather than on the die roll; the objective of a typical eurogame is the placement of tiles, pawns or other on the board, the setting is structured on the game mechanics, simple and clear, the interaction between players is minimal or indirect. Three examples are The colonies of Catan, Puerto Rico and Carcassonne (all of the United Games).

On the contrary, here are the American games: based on real historical situations, exciting and dramatic settings, perhaps combative, Americans have very high randomness (one or more dice are omnipresent) and the goal is to defeat the opponents: the interaction is maximum and direct, your own move can make your opponents lose points. They are designed for groups of friends who can interpret the rules, and a game can last more than two hours. The houses of madness e Zombicide they are excellent examples of American games.


Of course, there may be games that have elements of one or the other family ...

If we want to classify according to the setting, abstract games don't have one. Point. The game mechanics are self-contained, the tokens are tokens and do not simulate anything. On the contrary, simulation games are based on a setting (gathering resources, war ...) which is simulated by the game. At the extreme, again, we have role-playing games in which players play someone, in a fantasy setting: the most famous is Dungeons ad Dragons. Typically German games are more abstract, while Americans are more environmental.

Others, various and possible ...

Finally, we can classify the games as:

We could go on and on in classifying board games as thousands and thousands are themselves. But you, which category do you belong to?

add a comment of Classifying board games: our guide