The Kingdom Hearts board game is coming in 2019

Talisman: Kingdom Hearts will be a board game based on the Games Workshop classics

The Square Enix saga, Kingdom Hearts, which just this year is back after a very long wait with its third chapter, for ten years it went from PlayStation exclusive, then confirmed for various portable platforms including Nintendo DS and PSP, and finally also on mobile. But now Sora and his friends conquer a new medium and appear on our tables.

Talisman: Kingdom Hearts Edition, a combination of the Square Enix saga and the classic Talisman

Talisman: Kingdom Hearts Edition is currently in development at The OP (aka USAopoly), a company famous for publishing versions of classic games such as Monopoly, Cluedo and Risiko but with some changes: from here Cluedo Harry Potter Edition, Risiko Game of Thrones Edition and much more. Talisman: Kingdom Hearts Edition will be based on the game Talisman: The Magical Quest Game, the classic board game released over 25 years ago that is now about to be released in his fourth version.

Kingdom Hearts-inspired version of Talisman will be available from two to six players, which will be able take on the role of Sora, Riku, Kairi, King Mickey and Goofy. Players will have to "acquire the Strength and Magic to seal the Door of Darkness and lock up the Heartless to prevent them from consuming the worlds," according to official news.

Talisman: Kingdom Hearts Edition it will include three regions, including The Isle That Never Is and The Middle Town, a six-sided custom nut, coins reminiscent of the Munnys as in the original video game and will require a large dose of nostalgia for fans of the saga.


USAopoly announced this license agreement with Games Workshop in early 2019, but still we have not received a release date. Meanwhile, here's what the box of this new partnership. 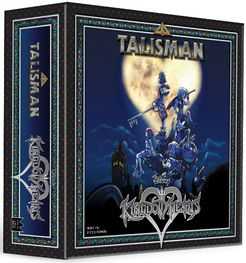 Keep following us on techigames.com for all the news on Kingdom Hearts and more!