Published by Rose & Poison, Stardust is a cinema-themed card game. During the game you have to put yourself in the shoes of a famous film writer and your aim is to write as many stories as possible in order to become the best in Hollywood.

The game consists of 108 cards, divided into: 62 Script cards, 28 Attack cards and 18 Defense cards. In turn, these 3 categories are divided into some sub-categories that we are now going to see: 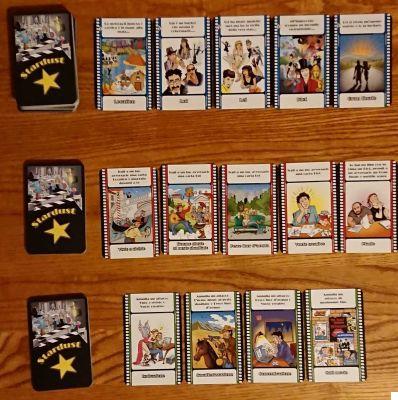 Let's see specifically what are the effects of Attack cards and which Defense cards we can use to protect ourselves from these attacks. The Attack cards are of five types:


How to play | Stardust Review

The game is played in turns and 6 cards are given to each player before starting. During his turn, the player must take a card from the draw pile, then he can decide whether to exchange one or more cards from his deck with the other players. When he has finished any trades he can do one of the following:

I discovered this game by chance during a fair and bought it right away, because as a cinema enthusiast it could not be missing in my collection. The games are fast, so waiting for your turn to come does not bore us. The phrases written on the Screenplay cards have all been taken from very famous films and this makes the game fun in two respects, the first is that cinema fans can try to understand which film they are from and the second is that they can come out of films with truly absurd plots. I have used this game several times, from the point of view of the material I can only be happy because the cards are still in excellent condition, while from the point of view of playability it risks becoming a bit boring if you use it too often because in the end the stories that are composed turn out to be always the same and that part of the fun is taken away. It is not recommended for those who love strategy, because in this case one is very dependent on the luck factor.