Retrogaming, in the far distant galaxy with Star Wars: Knights of the Old Republic

In this article from the Retrogaming column we fly into the meanders of the galaxy far away, conceived by George Lucas, to discover with Knights of the Old Republic one of the few RPGs that has been able to make Star Wars fans dream

The saga of KOTOR has acquired, over the years, a not indifferent group of fans. It has been noticed in recent weeks: between rumors of a remake of the first chapter and the celebrations for the 10 years of MMORPG The Old Republic, fans on the web have been making themselves heard lately. The reason for all this affection is soon said: we are talking of the only real RPGs currently set in the universe of Star Wars. This, combined with a story and characters highly appreciated by audiences and critics, make it Star Wars: Knights of the Old Republic (together with its sequels) a pearl of rare beauty: today we will see, in this column article focused on retrogaming, why it is still worth playing today.

We are at Bioware, a development studio that has already become famous for having created several masterpieces of role-playing games. After Baldur's Gate, Baldur's Gate II and Neverwinter Nights, all RPGs set in the universe of Forgotten Realms di Dungeons & Dragons, it was decided to change direction. Leaning on the historic publisher LucasArts, it was decided to make an RPG set in the Star Wars universe. We will also see how, taking advantage of the expanded universe, particular but perfectly fitting choices were made.

Given the success of the first chapter, later it will be decided to make a sequel. However, Bioware will not develop it: being the company busy with the development of Jade Empire and wanting to focus its attention on the original productions, it will recommend Obsidian Entertainment, another well-known industry giant, for the development of Star Wars: Knights of the Old Republic II: The Sith Lords (which maybe we will deepen in another article dedicated to retrogaming, who knows). 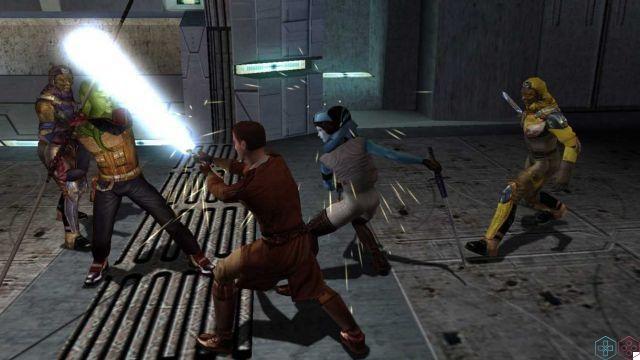 The game is structured with the classic systems present in RPGs, and especially in Bioware's games. There is, for example, to be mentioned first of all the D20 system, inherited from the paper role-playing game Star Wars: The Roleplaying Game of the Wizard of the Coast, in turn taken from the system of Dungeons & Dragons. It can be seen immediately: in addition to basing the fight on the roll of dice (virtual in this case), the attributes of the characters are also the classic six: Constitution, Strength, Dexterity, Intelligence, Wisdom and Charisma.

Speaking of combat, it is structured turn-based, in semi-real time. What does this mean? It means that, even if the duration of each round is fixed around a certain real time interval (about six seconds), the player has the possibility to pause the game at any time during the fight to plan the moves of your fighting characters.

We also find a system of alignment to the light side or the dark side, in which we can choose whether to follow one of the two paths more than the other based on our choices in the dialogues and, more generally, on our actions during the game. In short, it is a system that will probably be very familiar to Mass Effect players, which have had to do with the system of morality. The other characters in the party also have a predefined alignment, which however cannot change. 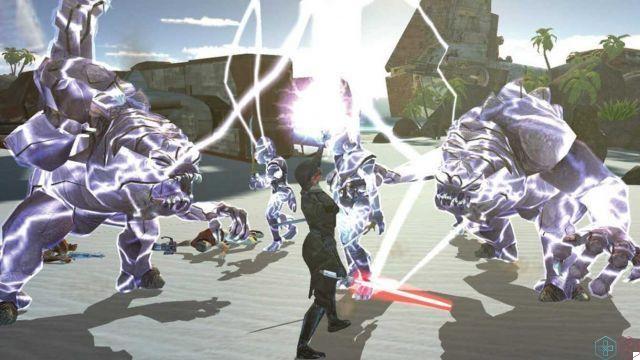 Proceeding in the analysis of Star Wars: Knights of the Old Republic through this article of the column dedicated to retrogaming, let's move on to talk about the party. In fact, during your adventure, you will meet many characters different that will follow you during the game, each with their own story, their own alignment and their own specialties. Many of these characters mirror, in part, those found in the original films: you'll have the droid duo, a Wookie with his trusty partner, a Mandalorian bounty hunter, a Republic naval fleet pilot and various Jedi to accompany you.

The choice to model the characters (and also some locations) in the image and likeness of those in the films is due to the desire to keep an atmosphere that referred to Star Wars, avoiding the danger of making a too generic space role-playing game. As we will see later in fact, the plot and the context in general differ greatly from the events of the original work, so as to allow Bioware to adopt a greater creative freedom.

Each of these characters has one backstory that you can decide whether to deepen through dialogue with them. Always through the dialogue and the answers you choose to give, you can decide how to develop your relationship with each one. The characters that you can take with you, when you are out exploring the various maps, will be at most two: you will therefore have to pay attention to who to choose from time to time, both from a tactical point of view and from a story point of view, as the presence of a character in a given context could trigger particular events. 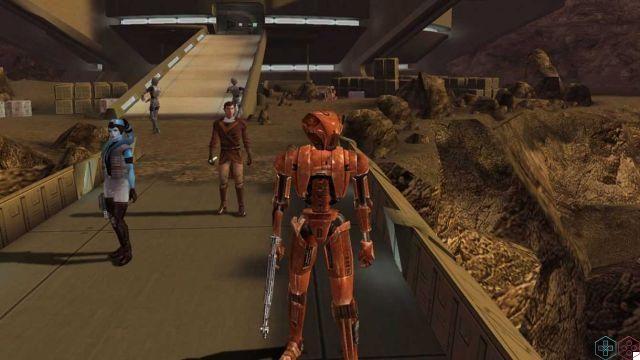 The story takes place during the age of Old Republic, or 4000 years earlier of the events of A New Hope. In particular, we find ourselves in the midst of a conflict that will later be referred to as the Jedi Civil War. This war began when the Jedi Knight Revan he founded a new Sith empire along with his apprentice Darth Malak, proclaiming himself the Dark Lord of the Sith, and leading many other Jedi to leave the Galactic Republic to join its ranks.

The events narrated are therefore linked to those of the comics published by Dark Horse The Chronicles of the Jedi, in which the Old Republic is introduced for the first time. This, as mentioned earlier, allowed Bioware to explore new historical periods of the expanded universe, and therefore to be able to operate with greater creative freedom. In fact, various details have been included in the game that deepen various aspects of the expanded universe of Star Wars, making the project particularly ambitious from this point of view (just think, for example, of the history of Tatooine, or the origins of the Kashyyk ecosystem…).

In addition to a setting with attention to the smallest details, there is also a few words to say about the plot: if it can be very standard at first glance, and not unlike most of the galactic conflicts that we can find in the original works and in the expanded universe, we will find a detail later on stud twist, a rather apt twist (without spoilers, those who have already played it will know). That of playing on the player's unawareness through the memory loss is a technique that has been used many times now in the gaming world, but which always works precisely because it is capable of exponentially increase identification: the player and the main character have in fact the same starting information, and their progression in learning new information therefore proceeds in parallel. 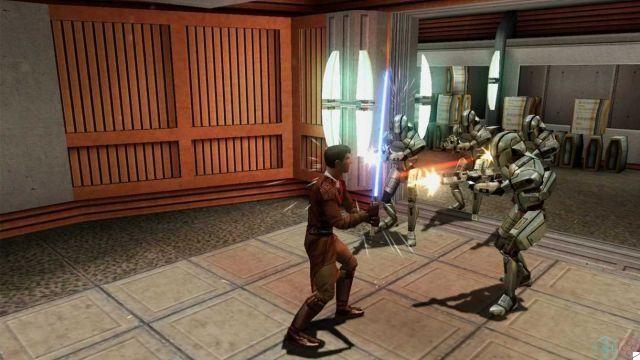 Let's move towards the end of this Retrogaming column, and what we can say is that, despite the weather, Star Wars: Knights of the Old Republic is a daydream for fans of the universe created by George Lucas. If you can get over the signs of aging a title it has by now 18 years, what we will find is a game that allows us to live and shape our adventure as we prefer. Whether you prefer to follow the light side or the dark side, whether you prefer to play as a Jedi who specializes in combat a double or single lightsaber (this can be customized with the colors you want, from the classic blue, green and red to the yellow and purple details), or if you prefer to use a non-Jedi class, these are all viable possibilities in our adventure, and all this makes the title, as of today, a must that every Star Wars fan should give a chance to.

When you get to the end, the word goes to you. What do you think of Star Wars: Knights of the Old Republic? What were your experiences with this game? In the meantime, we invite you to stay tuned to the techigames pages to stay updated on all the most important news regarding the videogame world. If you prefer to buy game keys at discounted prices (including the one for Knights of the Old Republic), you can do so through our link to Instant Gaming.

add a comment of Retrogaming, in the far distant galaxy with Star Wars: Knights of the Old Republic