Retrogaming, a journey through time with Crash Bandicoot 3: Warped

A great vintage 1998 for retrogaming, in fact, the adventures over time resume on the first PlayStation with Crash Bandicoot 3: Warped

We are getting closer to dawn, then, new millennium and Sony has already placed authentic bombs on the market that bear the name of Spyro and MediEvil whose deeds still shine today thanks to remastered editions, To sequel and to appearances in other brands.

Obviously, every retrogaming enthusiast knows perfectly well that, in addition to the horror adventures of Resident Evil, the first PlayStation certainly did not miss the opportunity to work on the follow-up of the adventures of the most famous marsupial ever with Crash Bandicoot 3: Warped. So let's have a good supply of Wumpa fruits, keep the good Aku Aku at hand, pay attention to the crates and let's start this adventure between the portals of time!

An insane protagonist, the new return

Made by the team of N, later we will review them with other sagas such as Jak and Dexter and Uncharted, the game in question immediately proved itself slightly "easier" compared to the first two chapters, but no less exciting e worthy of remastered (this well done) and to be played again and again.

Il first chapter a few years earlier, in my opinion one of the most difficult to complete, it had sold a lot anyway, so much so that it only had to wait a year for the follow-up to the title Cortex Strikes Back. Here too the same story, a global success that has consolidated even more the PlayStation in the Olympus of consoles.

For this third adventure therefore we needed something that would leave the fans even more stunned without distorting the brand anyway, this would have happened later alas, and guarantee a colorful, addicting and hilarious gaming experience that also went to recall the settings seen in the great Hollywood films. There would therefore have been more intense game modes seasoned with the right dose of new rivals and old acquaintances in search of Crystals of Power. Who will win this endless battle between good and evil? 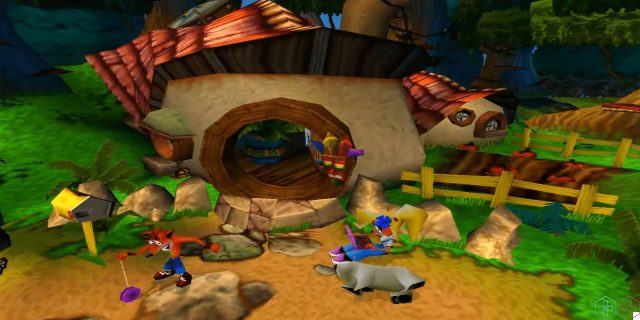 The game screen, with a “chiassosissima” Universal Interactive Studio Production, immediately makes it clear to the 3D platformer that the nineties have many cartridges to shoot, so much so that here they all come out of a case while a clock with crazy hands marks the beginning of the game.

The story picks up where we left off our characters in the second chapter with Doctor Neo Cortex's station falling apart. Unfortunately, one of these frees the evil mask Uka Uka, twin of the good Aku Aku, who is now more furious than ever. Although Neo Cortex has failed for the umpteenth time, Uka Uka still decides to use his magical powers to make our dear protagonists pay and decides to give the scientist another chance to redeem himself. 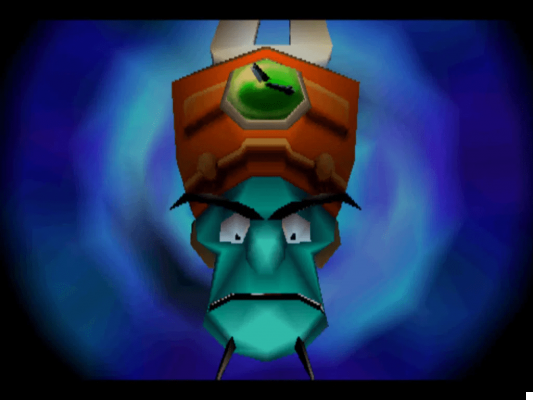 Of course he will not be alone in this evil plan as he comes summoned Doctor Nefarious Tropy which, thanks to its time-altering powers mixed with science, creates the Vortex Sucks Time. Thanks to this machinery, the Crystals of Power previously collected by ours have ended up scattered throughout the ages and guess who will have to save the situation again? The bearer of this bad news is the Aku Aku mask who, once he learns of the escape, runs to inform the brothers Crash and Coco and prepares to leave with them. Of course we know the two protagonists and the mask well, but what about the enemies?

The title includes some old acquaintances like Tiny Tiger, here in the role of a Roman gladiator, and the Dr. N. Gin who, mad with rage, is now more than ever ready to settle the score. In short, characters that we have had the opportunity to face and defeat in previous episodes, but here we have to put them together with Uka Uka, Dr. Nefarious Tropy e Dingodile, the new antagonists of this chapter. 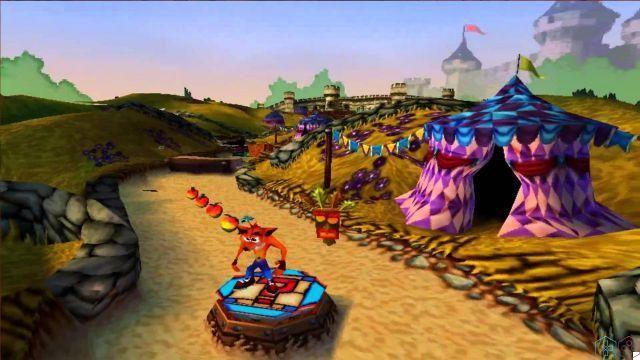 Did you know that within this game you could try a little taste of another great PlayStation title? That's right, it was enough to enter a secret code on the home screen to play one Spyro demo! But let's get back to our heart marsupials.

Like some characters, certain mechanics have also been taken from previous games. Here in particular, the Warp Room which will allow us to travel between worlds and save or load the game, comes from Cortex's return. In addition, when loading some levels including those of the bosses, there will then be gods cute little curtains with the antagonists who will try to dissuade our hero from doing the feat.

However, a long and demanding undertaking with fairly tight levels, despite the bonus moments and more relaxed schemes in others, whose rhythm is marked by the notes of the composers Mutato Muzika, Mark Mothersbaugh and Josh Mancell. So in total there are 32 levels, including the secret ones that go from prehistoric times to the future, where it will be necessary to try to recover the Crystal of Power positioned towards its end to consider this level exceeded. Obviously this is the "main quest" because, if you take all the crates or replay the level by passing the timed challenges and the like, you will come into possession of other relics. 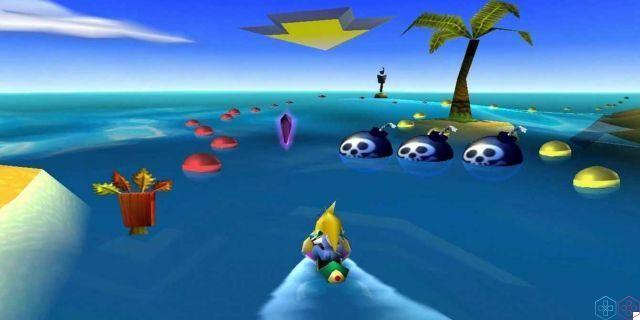 The replay then becomes almost obligatory for the most intransigent completists since some speakers are positioned in a way too “particular” to be broken as Caparezza sings in Abiura di me. It will therefore be necessary to defeat the bosses of the end of the era to learn some special moves, such as the double jump or the super belly, to continue the adventure in the best possible way and reach that fateful 100% (and even more).

It should be remembered that, as in most 3D platformers, even here you can defeat enemies by jumping on their heads, but by doing so you would lose all the taste of tornado di crash which, when upgraded, will prove particularly useful for glide and reach even the most difficult points.

Another super effective attack is the bazooka shooting Wumpa fruits, infinite ammunition and practically unstoppable, and knocks down any opponent and crate with more than fair accuracy. Anyway, who said you have to walk all these worlds? Divided respectively between brother and sister, in fact, the game makes available different means of transport to be used in particular levels.

Crash he will therefore use a motorcycle, an airplane and a sort of underwater motorcycle while Coco a tiger, a speedboat and even a spaceship. Furthermore, it should not be forgotten that, both on foot and by these means, the good Aku Aku will always be next to our protagonists. He is therefore able to "parry" the blows of the enemies, one will be enough to lose a life, but if three masks are collected, then, there will be a momentary invincibility as seen also in the various chapters of Super Mario. 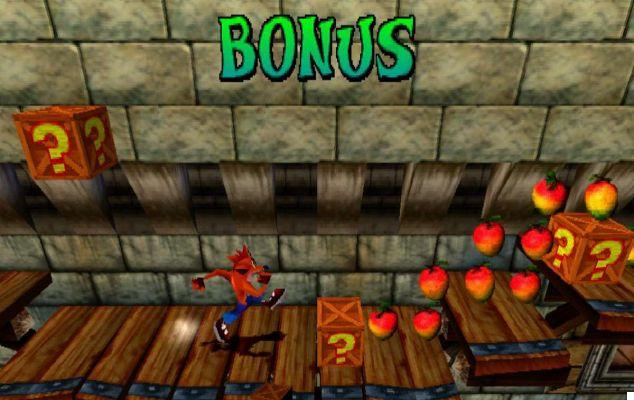 A series of highs and lows - Retrogaming: Crash Bandicoot 3: Warped

If a game is a worldwide success, what does it usually do? You simply opt for a sequel or a racing version or an in vague Mario Party style, but let's go with some order. First of all, the guys from Naughty Dog, took care of our cute marsupial only up to CTR, it also went down the road of the remake, then passed the ball to others and it was at that moment that the trouble started.

In fact, although the "party game" version was all in all quite nice, The Wrath of Cortex for PlayStation 2 it has generally proved a follow-up little inspired with gods excessively long loading times. A real contradiction for a type of game that is based on action and speed, not the levels of Sonic, but we understand each other. 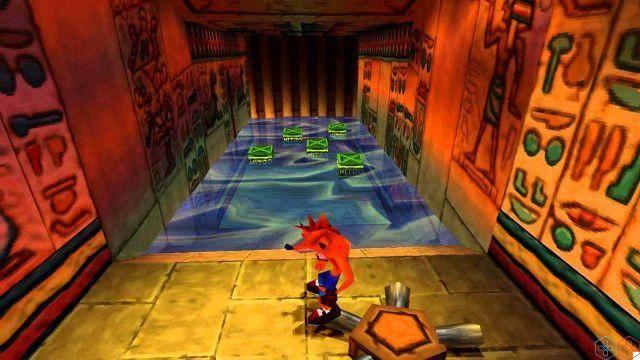 Other decidedly dubious moments were then the titles produced by Vivendi Games which, apart Twinsanity, Has completely distorted the game mechanics and even the design of the character itself making him almost unrecognizable with those damned tribal tattoos on his arms. The things they did not fare better with the mobile, Game Boy Advance and Nintendo DS versions, absolutely forgettable.

Luckily the last few years have seemed to smile finally to our messy marsupial thanks to the remastered versions of the original trilogy and CTR, which then happened again for the aforementioned Spyro and the good Daniel Fortesque. A rescue that has done extremely both to fans of the old series who have not yet given up on controllers and novice players. 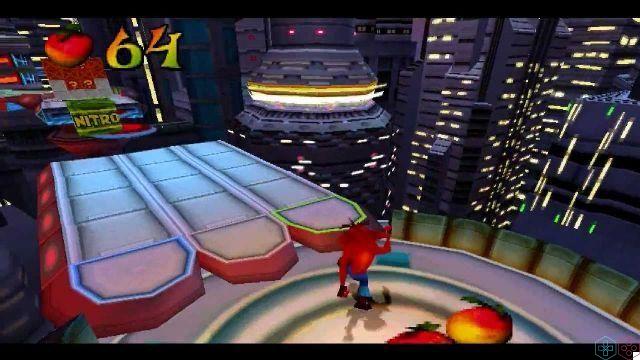 Between Wumpa fruits and cases of TNT

See a title like today Crash Bandicoot 3: Warped, more than twenty years after its release on the first PlayStation, it is an immense joy so much that it is almost strange to call it retrogaming. Of course, time and sequels have passed, but it is still a really fresh, fun and colorful title. A must for 3D platformers and completists alike, today it's even better to review since its latest sequel and remastered trilogy they also allow younger players to enjoy a title that has thrilled those of the last generation. If you manage to get the original version all the better, but the advice is always the same, recover it and enjoy it all until the last case!

If you want to check out its main series and spin offs most successful at the right price, click here, while, to stay always updated on the video games of yesterday and today, we are always waiting for you here on techigames!

Retrograming: on the green with Mario Golf! ❯

add a comment of Retrogaming, a journey through time with Crash Bandicoot 3: Warped