A square, four days of fun, 1500 box games and a team of volunteers ready to entertain you, this is GiocAosta!

The GiocAosta is back again this year with its twelfth edition: game noon, held from 6 to 9 August 2020 in Piazza Chanoux.

GiocAosta is a playful event born in 2009. For four days Piazza Chanoux is transformed into a large open-air playroom where young and old can choose from 1500 boxed games titles to play. At the head of the organization is Aosta Iacta Est, an association of volunteers that promotes intelligent play by creating events that revolve around it; at the end of it, other associations have joined, such as Dimensione Arcana which is based in Moretta (CN) and Expansion Ludica which is based in Savigliano, which pursue the same purpose and all together form the large group of volunteers who welcome and entertain the GiocAosta audience. In support of this event there are also several publishing houses including Dal Negro and Asmodee, just to name a couple.

2020 is certainly a special year, in the world of events many have suffered a strong arrest and have been postponed to 2021. Fortunately this did not happen to the GiocAosta. The staff rolled up their sleeves to allow the normal conduct of the event in the safest possible way, not only at every game table there was an obligation to wear a mask and use sanitizer for the hands, but they were also increased the meeting points to be able to play, in addition to Piazza Chanoux, and are the following: 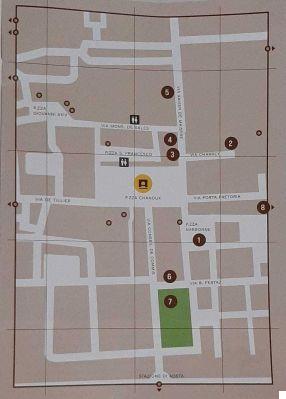 Furthermore, four different colored signs were placed on the four sides of Piazza Chanoux, indicating the meeting points for the departure of the various activities to avoid gatherings in a single point as happened in other years.

The event opened with the inaugural day of Thursday 6 August at 18, on this first day it was possible to play some sessions of Dungeons & Drangons, guided sessions of investigative games such as Sherlock Holmes, Chronicles of Crime, Detective and Mythos and other board games. The two special events of this first day were the tournament of Belote in Baraonda (Dal Negro) e Around GiocAosta: streets of cinema, the latter is the closing event of the Silent film festival with live music. Everything ended at h.24.

A long weekend of games

The rest of the event is a full immersion in the world of games. Fridays and Saturdays are perhaps the days that allow visitors to be able to play more because they go from 10am to 24pm. 10, while on Sundays it always starts at 18 am but ends at XNUMX pm. During the three days it was possible to borrow games from the playroom, participate in role-playing and investigative games sessions and play retro video games. The two most particular events of these days were The valley of Oster Creek and Great Treasure Hunt. The first event lasted 24 hours and is a duel between sheriffs and outlaws, while the treasure hunt was divided into two parts, at 19pm there was the family version and at 21:45 pm the senior version, both took place in the historic center of the city of Aosta.

As the title suggests, during the event it is possible to spend a day like a king. But how is it done? Simple! By participating in the crowdfunding. This method of support by the participants has been active since 2015 and includes four types of packages ranging from a base of € 10 to a maximum of € 100, in exchange for the donation you will get some beautiful gadgets. With the highest donation, i.e. the € 100 donation, you can sit at the King's table. Let's see specifically what this package contains: 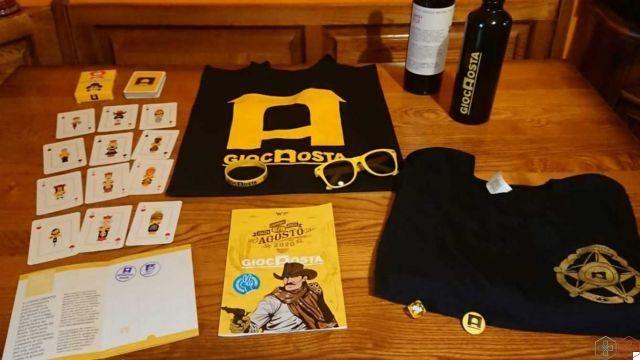 For information purposes only, for the King's table I chose Wingspan, a management software published by Ghenos Games ranging from 1 to 5 players, but a review will be dedicated to this game later.

How to support the GiocAosta

In addition to crowdfunding, there are three other ways to support this event:

I've always heard of this event and when is the first year that I can take a day off to attend it? Obviously the one in a pandemic breaks out! I do not deny that I hesitated a little about what to do, because I did not like the idea of ​​getting in touch with too many people given the situation. In the end, however, I decided to trust the organizers, to support them and to leave on Friday towards GiocAosta and I think I made the right decision.

All the staff have really worked hard to make everything as safe as possible and to enforce the safety rules, both as regards avoiding gatherings as much as possible and for the fact of sanitizing your hands before, during and after the game. and also to sanitize the station used for those who would arrive later. I also saw a great deal of compliance with the rules by those who only attended the event.

I do not deny, however, that playing two hours wearing the mask was not at all easy, because it makes it difficult to understand well who is explaining the game and communicating during the game, also wearing it in a closed place for a long time was a bit of a shape. of torture for the rubber band that was destroying my ears. They should patent a mask especially for table and role-playing games ... heheheheh! But apart from everything, it is right that the rules are these and in any case I enjoyed the day equally well, indeed perhaps even more than expected because it was nice to get back to normal for a moment.

This is a playful event in which to participate absolutely and, if possible, to be supported.

Ancient board games - thousands of years of challenges ❯

add a comment of GiocAosta: a seat at the King's table