We have all played with them, they are fun and leave room for imagination: Geomag, simple magnetic bars for complex constructions

Building lovers know them: colored bars with a magnet and lots of metal marbles. They are the Geomags, toys that encourage the art of building, spatial intelligence, geometry, patience and attention. 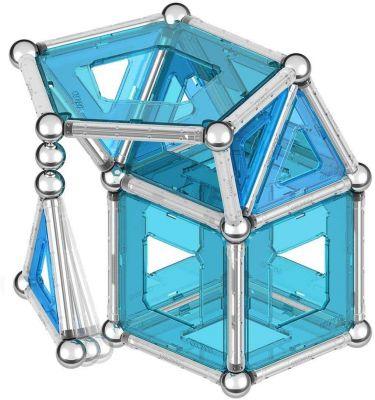 If we think of buildings, the mind flies to LEGO bricks, but a more recent invention has occupied its rightful place in the thematic area: Geomag. Claudio Vicentelli in May 1998 he conceived the product, filed the patent relating to the magnetic circuit and invented the Geomag brand, marketing it in August. Marketing is granted to a Sardinian company, Plastwood SRL by Edoardo Tsacciu, who started selling in 1999 through the “Città del Sole” chain of stores and advertising on TV.

Since then, boys and girls found the boxes of the new Geomag game on the shelves, consisting of a series of colored bars and metal marbles. For material scientists, the bars are equipped with two neodymium alloy magnets connected by a metal pin, superimposed with polypropylene, the spheres are coated with nickel. At that point, just put your imagination into it and: by connecting rods and spheres to infinity it is possible to build fixed, mobile, flat, three-dimensional, rotating, tilting structures, in short: of everything. All thanks to the magnetism between bars and spheres.

Only in 2002 did the relations between Vicentelli and Plastwood break due to differences of opinion on the product. In 2003 Vicentelli founded Geomag SA, based in the Canton of Ticino. Geomag SA continues the production of the toy and its evolution: Panel. Panel is made up of triangular, rhomboid, square and pentagonal faces of semi-transparent colored polycarbonate, which can be used to fill the “holes” of the structures created with the bars, with a decorative and support function. The projects continue: 2004 is the year of Magnetic Challenge, position board game in which the pawns are Geomag bars. In 2005 came the G-Baby line, cubes and hemispheres with magnetic faces, for early childhood.

Geomag SA is a single-product company and was impoverished by the competition in the play world. In 2007 he asked for a moratorium on composition with creditors for six months. In 2008 a consortium of entrepreneurs raised the fortunes of the product: Geomagworld SA was born, currently in business, which includes the production of the 58 m magnetic bar.

It goes without saying that playing with Geomags develops attention to stable and less stable structures. Through the game we come to the conclusion that a triangle is a non-deformable figure, a square is not: it is necessary to insert a diagonal, which however is longer than the sides. Again, how many bars can be inserted in a row? How many different figures can be made with the same number of bars? Geomag aims to have plane and spatial geometry studied by playing, insert some notion of magnetism, all within a moment of relaxation and fun, alone, with friends or family, from simple to complex figures, developing patience and attention. But not only children, even adults: the stability challenges of Geomag constructions can also thrill adults.

GiocAosta: a seat at the King's table ❯

add a comment of Geomag, when geometry becomes a game