Level-5 returns to the field with its Yo-Kai Watch 2: Psychospectrums for 3DS family consoles. A great mashup between Spirossi and Pulpanime, whose goal is to combine the crème de la crème of these two previous versions. Repeatability or innovation? Let's find out together in our review

Well yes, Level-5 broke into the hearts of many with the brand of Yo-Kai Watch. Surely you know that the project not only counts video games among its ranks, but also anime, manga and various gadgets, which form the vast universe of cute little monsters which are the Yo-kai. The developer, however, does not seem to want to stop and on the gaming front has well thought of offering us a new adventure, even if perhaps the term "new" is not exactly correct.

But is it always summer here?

By now we have learned that the summer is the favorite season of the Yo-Kai, an aspect that has remained unchanged from the previous chapters. Just as we had discovered the existence of the cute little animals in the beautiful sunny season, also in Psychospectrums we will find ourselves impersonating a young man Nathan during the carefree days of summer holidays. As always we will have the possibility to customize our character, obviously in a very limited way, by choosing the gender (male or female) and setting the name we like best.

The game begins with the memory of the "golden times"Together with ours Yo-kai, bringing to mind some episodes of previous adventures. In fact, after various ups and downs, we were finally able to check our Yo-Kai Watch perfectly, forming a team as formidable as it is strange together with the sprite Whisper, to the kitten Jibanyan and the other Yo-Kai we'd managed to catch. The premise of Psicospettri then continues with amnesia, caused by the theft of our precious Yo-Kai watch by three elder sprites, stealing it during the night. This will result in the memory loss of our young protagonist, who will completely forget the existence of the Yo-Kai Watch and consequently will no longer remember having met the nice sprites. 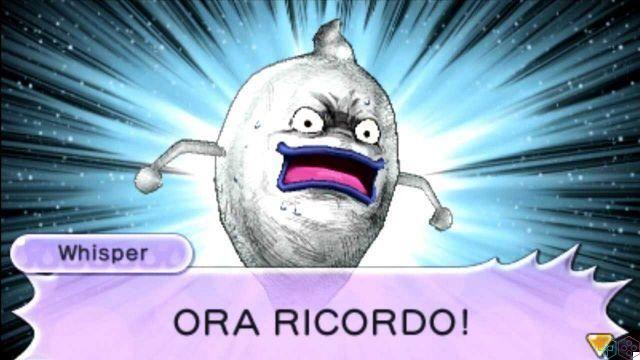 And at this point, as usual, we will be led to retrace the origins of our daring adventure, once again experiencing all the initial situations of friendship with the Yo-Kai, first of all Whisper and Jibanyan.

This already seen, which Level-5 proposes once again in Psychospectri, basically has one aspect positive it's one negative.

Starting from that positive, which concerns i newbies of the series, the déja vu allows you to approach the title without the need to have played the previous chapters. This is because the "retracing" of the facts can almost be considered as a great tutorial, which introduces some mechanics and hints to better understand the plot. The novice player will thus have one global vision more or less complete of the world of Yo-Kai Watch and will be able to play Psicospettri without too many worries.

The situation is different for i fans of the saga, that is, those who have played all the previous chapters of Yo-Kai Watch. For them this is ennesimo already seen of the initial stages they have to witness, so reliving the same situations once again could be boring. In any case, the veterans' effort to put up with the already seen theater once again will be rewarded later in history with the addition of new unreleased cutscenes, created specifically for Psicospettri. 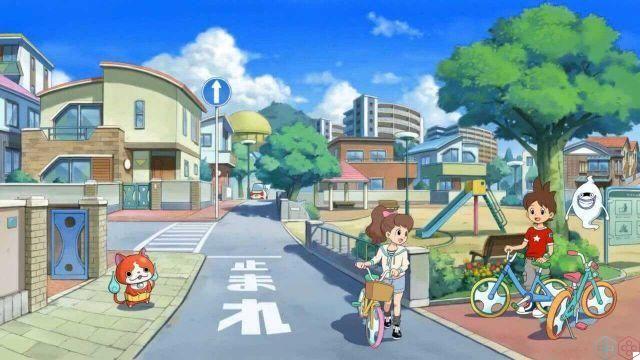 The first thing you notice as soon as you embark on the adventure of Yo-Kai Watch 2: Psychospectrums is the strong link with the previous chapters. This "revised and corrected" version of Spiritossi and Polpanime remains very much anchored in the past, so we didn't notice any major twists in both gameplay and design.

Il combat system it is identical in all respects to that of the previous chapters. Traveling with us we can take you up to sei Yo-Kai to keep us company, while in the fighting we will have the possibility to deploy some three at a time. They are arranged on the roster wheel and by pinwheel we will have the opportunity to bring the other three into the field in real time, should one of our faithful companions be in danger.

Always present also the quick-time event for special Yo-Kai moves, named Energy max, which always remain in the wake of the precedents. At first glance they might seem trivial, but we assure you that these little "minigames" will make you concentrate a lot, making the fighting more lively.

... with dear and old defects

Small note of demerit goes to the general management of the combat system. Unfortunately, as in the previous chapters since everything has remained unchanged, the player acts very little during fights. Apart from the use of items for HP recovery and quick-time events for special moves, there will be no other concrete possibilities to intervene during the clashes between the Yo-Kai. This is because our comrades they are totally independent and attack the enemy of their own free will.

Hence, the player often finds himself willing to witness the fight instead of acting firsthand. Despite this, however, the combat system still remains enjoyable thanks to its simplicity, also making it fun thanks to the nice animations of the Yo-Kai. There will therefore be comic situations during the fights, which will certainly make you smile. 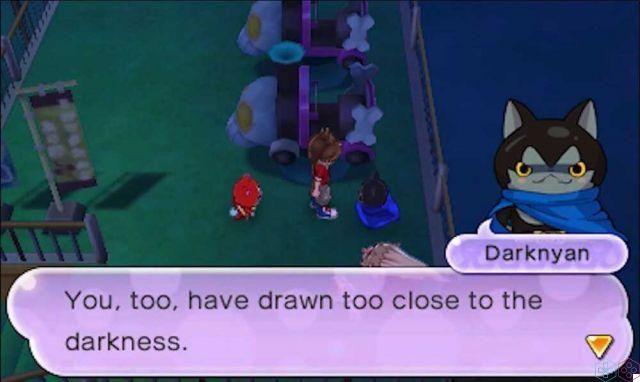 But where is innovation?

Yo-Kai Watch 2: Psychospectrums, as mentioned above, is aimed at create a complete and definitive gaming experience, combining the best of Spiritossi and Polpanime. We therefore have the resumption of many elements of the previous chapters, but everything is still enriched, strengthened and enlarged thanks to many unpublished contents.

Among the new additions we have ben twelve additional missions, among which those dedicated to the fantasmino Whisper e Darknyan, which will allow players to discover more details about the two characters. In this regard, we recall the presence of new animated sequences, which fit into the main plot and enrich it with new unpublished details.

Among the additional contents are also present new dungeons to deal with e new bosses to defeat. Both of them are based on the SaveSpirit and Fleshy saves, should you decide to import them. Also in Psicospettri you can make friends with 15 new Yo-Kai, which was not possible in previous versions since they only figured as enemies. Now, however, after having faced them in battle, we can decide to make friends with them. 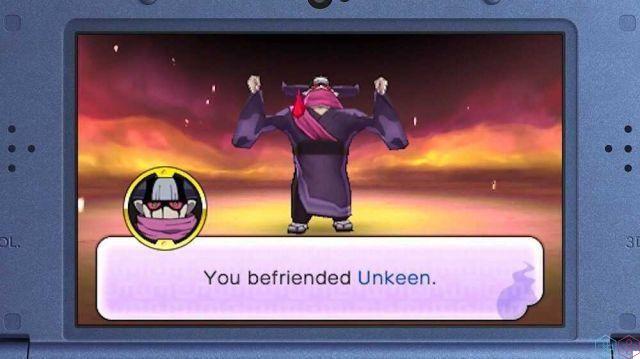 Filled with cream or chocolate?

Another very nice idea introduced by Level-5 is the choice of brioches. When we start our adventure we will be able to choose between two flavors of brioches, namely the Brioches of the Soul and those of the Spirit. This choice will affect some events of the plot, and by choosing one flavor over the other you will have some story level changes.

In typical Yo-Kai style, the choice of brioches is proposed to the player with the usual ones humorous and adorable scenes, which will certainly make you smile. Furthermore, this action raises the replayability of the title: it will be possible to repeat the adventure by choosing the previously discarded brioche, and this will allow you to experience the new events related to it.

No news on the multiplayer front, which has remained unchanged from Spirossi and Pulpanime

La Multiplayer has remained unchanged and perfectly follows the canons of the series. We can challenge friends in local or online, with the possibility of exchange Yo-Kai. The technical sector has the same peculiarities seen in Spiritossi and Polpanime, as well as the animations and the design of the characters.

Do you have a map?

La map by Yo-Kai Watch 2: Psychospectra can truly be defined huge, according to the standards usually seen on Nintendo 3DS titles. The great game environment is explorable far and wide and contains a myriad of places, each with its own characteristics. Yo-Kai are hidden everywhere and it will be a lot of fun to explore to find their location thanks to lens of our Yo-Kai Watch. Also added new portions of the map, including the Gera Gera Village.

Newbies to the series may stumble upon some orientation difficulties, but given the remarkable size of the map, even some veterans could suffer the same fate. Certainly as you proceed in the adventure you will become more familiar, but the fact remains that orienting yourself, at times, could be problematic. 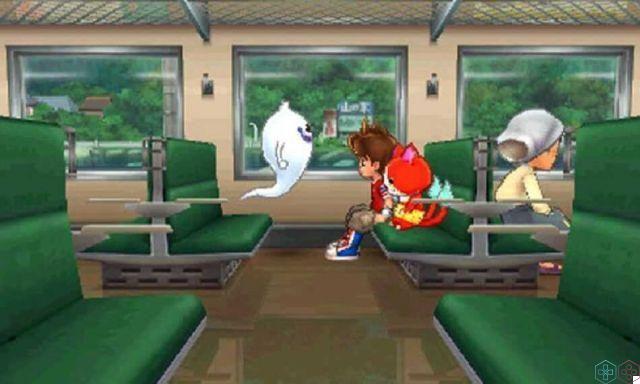 Walk there? But it's too far, better to take the train ... Or maybe not?

To move to more distant locations you will have to use the rail service. This should have made moving around faster, but unfortunately Level-5 didn't handle this in the best way. Train journeys are in fact quite frustrating, as we will be obliged to attend every single stop before our destination, without the possibility of skipping them. No fast travel therefore, but only a mistake. During the journey, while we will be comfortably seated in the carriage, it may happen to run into some hostile Yo-Kai, but it will not be difficult to get rid of them quickly.

Also Psychospectrums does not contradict itself and keeps alive the "pucciosità”Of the Yo-Kai Watch brand. Graphically speaking, the game is one true beauty for the eyes, full of color and life. The joy that this design choice transmits is really strong, and certainly contributes to the passing of nice carefree hours in the company of our Yo-Kai. The aesthetics of the latter are always the same, simple, endearing and with that pinch of "irony”That make these little monsters adorable. So, the graphics engine of Yo-Kai Watch 2: Psicospettri hasn't changed, but it always looks great: at this juncture Level-5 did not miss a shot. 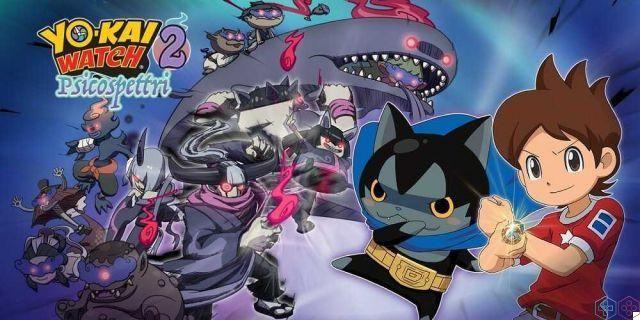 I spent some wonderful hours in the company of Yo-Kai Watch 2: Psychospectrums, which will certainly have their place of honor in my videogame baggage. The first impact with the bright colors of the title, the design "pucciosissimo"Of the characters and environments is always pleasant. Lovers of the genre will surely be enticed to progress in the story.

Psicospettri offers several unpublished contents not seen in Spiritossi and Polpanime, which makes it the ultimate 360-degree experience of the second episode. An excellent title for newbies and certainly for veterans of the series, even if the latter may find repetition in the contents.

The additions that Level-5 has introduced in Psicospettri are not few, but not many: in any case it is perceived the company's commitment to making the game accessible to all, which I personally appreciated very much.

add a comment of Yo-Kai Watch 2 Review: Psychospectars, old glories and some innovations