The WWE roster of wrestlers returns in a new version intentionally exaggerated, hilarious and overly violent. Find out more in this WWE 2K Battlegrounds review

It is useless to go around it too much, in recent years the wrestling linked to the historical names RAW e Smackdown it has lost part of its appeal, mainly due to a roster of protagonists that are not always convincing and often too variable. In fact, there are not many superstars who have been able to shake the hearts of American wrestling lovers in recent years, as old comebacks have been able to do.

Within the gaming world, things have gone even worse. The latest games in the series “WWE 2K” they failed to give the historical fans any news worthy of note, proving to be linked to a technical system, as well as gameplay, definitely backward. It all had its climax with the unfortunate (to be kind) WWE 2K20, which is probably the lowest point of the entire series.

The bankruptcy nature of this title forced some reflections on the part of the 2K producer who decided to cancellare WWE 2K21 in order to offer a better product after 24 months of development. Saber Interactive however, it came to the rescue of all wrestling lovers and, in order not to leave us orphans of the annual videogame component, it developed, in the wake of the baskettosa counterpart NBA 2K Playgrounds, the explosive WWE 2K Battlegrounds. Spoiler: 2K Battlegrounds will give you much more satisfaction than the canon series has been able to do in recent years.

WWE 2K Battlegrounds fully embodies theanima del videogame arcade and exalts it to the nth degree. What is certainly not lacking are the various game modes among which you can extricate yourself to the sound of violent stunts: Campaign, Tournament, King of the Battleground, Battleground Challenge, Man Exhibition ed Exhibition women. The campaign mode (lasting about 5-6 hours) is based on an intuition of the legend Paul Heyman which, with the approval of the historic president of the WWE Vince McMahon, decides to found a new roster of wrestlers with the idea of ​​having them challenge in the most confined and unthinkable places of the entire globe (a crocodile ready to bite you in the audience is certainly not a scene you see every day). The whole narrative is entrusted to the flow of some comic pages very well done.

Practically we will be called to impersonate several emerging wrestlers who, to the sound of fights at the last pinch, will try to become the strongest fighter of all. The general difficulty of the clashes increases as you advance within the campaign (although it is always very simple), starting from a simple tutorial phase to get to fights to the death in the historical scenography of Wrestlemania. The matches that we will meet in the campaign, but which also characterize the remaining single and multiplayer modes that make up the WWE 2K Battlegrounds offer, vary from the classic 1VS1 up to tag team,  steel cage, gauntlet e royal rumble. 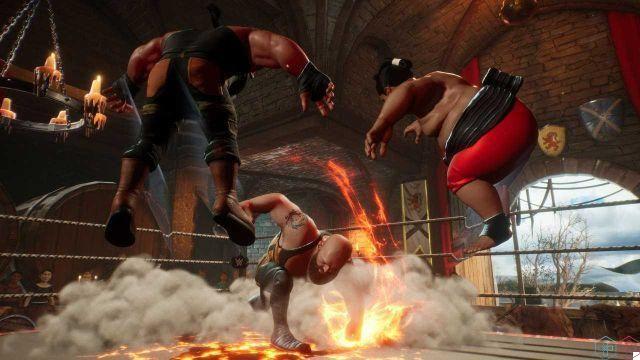 All the spectacularity of wrestling | WWE 2K Battlegrounds Review

WWE 2K Battleground gameplay is based on a large but limited range of moves, the single moves can be activated with very simple key combinations but the spectacle will never fail, indeed! I really appreciated the inclusion of a parry system which, activated at the right moment, allows you to make a real one parry. What I appreciated the least is the total absence of ground maneuvers (with the exception of submissions). All in all, the whole gameplay system may bore you after a few hours of gameplay due to its limited complexity, but this will not be the case if you constantly have someone to challenge. In my case, for example, the limitations of gameplay have completely taken the background in the infinite challenges to the sound of (virtual) suplexes that I had with my brother. 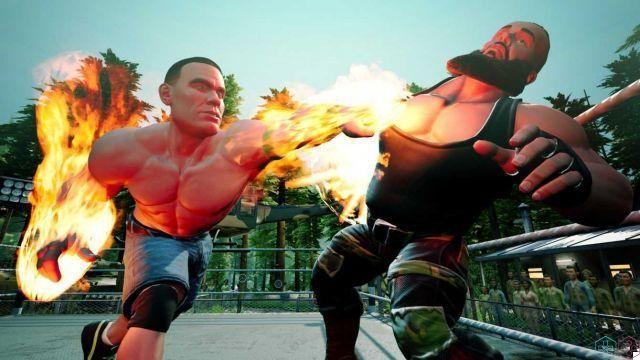 Each wrestler is entrusted with a fighting style that alternates between brawler, power house, high flyer, tecnici, completi and determines the preferred characteristics in the approach to combat. Also, before the start of each match, you can choose between three power-ups to activate at the right time in the ring, such as an enhancement to defenses, attacks, penalties for opponents and life regeneration.

The soul cartoon of WWE 2K Battlegrounds represents the perfect expression of the brutal, exaggerated and sometimes funny style that characterizes the gameplay. The theatrical and paradoxical, albeit faithful, aesthetics of the characters it is accompanied by well-characterized locations and equipped with special features interactive elements (such as the aforementioned crocodile, or a helicopter to cling to) to be used to alternate the pace of combat with completely unlikely situations. All in all we are faced with a graphics that can be appreciated, clean in the details (which are certainly not many) and above all very stable in terms of framerate in 1v1 on PS4,  while the situation worsens as the number of characters on the screen increases. 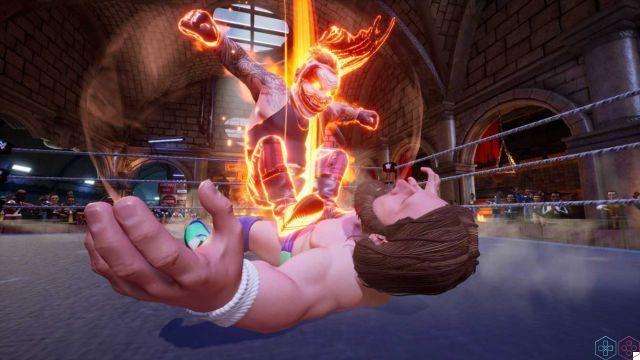 Speaking of characters, the roster includes about 70 wrestlers at launch and just as many will come with Free DLC. But be careful because in this we have found perhaps the biggest flaw of this video game. At the first start only a few wrestlers will be playable, the rest can be unlocked in two ways: using the Battle Bucks or investing Golden bucks. The former represent the in-game currency that can be earned through clashes, the latter are to be purchased through real money through the PS Store. In an absolute sense this would not be an insurmountable problem and indeed, the choice is left to the gamer to have everything immediately or to unlock the characters over time. Unfortunately, by relying solely on the in-game coin, you will be able to unlock all the characters in about a decade of your life, with the obvious result that you will abandon your personal mission to unlock everything before even starting. 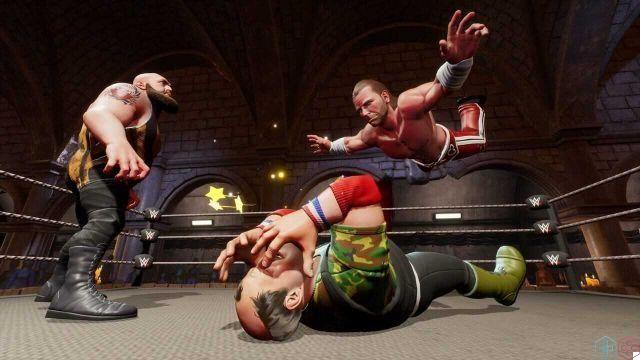 It's time to take stock

WWE 2K Battlegrounds è un videogame fun if you don't take it seriously. It certainly doesn't represent the ultimate wrestling video game due to its limitations and repetitiveness of gameplay, but it is perfect for spending several hours of fun in the company of the most eccentric versions of your favorite fighters. All this is also favored by a sale price almost halved compared to a triple A, too bad for those microtransactions ..