Wreckfest review: save who can!

We have been trying Wreckfest on PS4 for some time now, let's see if it convinced us, or not, in our review

Not so many car games come out and, unfortunately, only a small part of those that land on the shelves turn out to be really noteworthy. This happens mainly due to the lack of the central factor that should unite every video game: fun.

Several months after its arrival on consoles, we tested what turned out to be a real discovery in the world of course titles: Wreckfest. Find out if its destructive nature managed to convince us 100% in our full review! 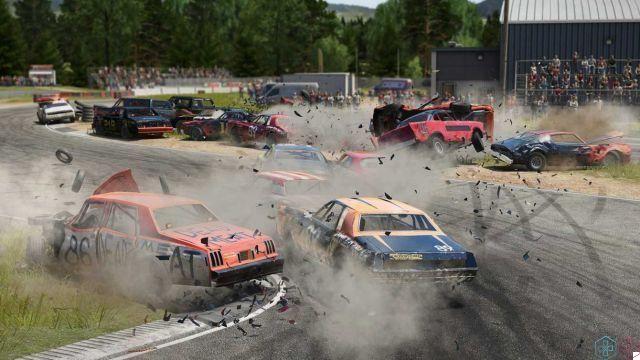 Every man for himself!

Wreckfest is not a racing game conventional. In fact, the spotlight is on danno destruction of the means available. This allows the title to be extreme, with crazy and above all varied challenges. Having laid these foundations, let's find out what are the available modes of the title developed by Bugbear Entertainment.

Once the game has started, we will have before us the classic challenges that we can customize, the online multiplayer mode, the various options and the "career". The latter immediately catches the eye and is in fact the first that we went to test. Divided into five “tournaments”, this modality contains in it a myriad of different challenges, with different objectives and means. This difference between the races only adds to the fun as we face ever-changing situations.

However, there is a lack of a proper narrative, which might seem superfluous in a title like this, but in reality it would help to better digest the string of races to be faced.


Among the various rides available we have (obviously) i demolition derby, the "classic" races that will see us catapulted onto tracks made of mud, asphalt and bad intentions, as well as more particular challenges, in which we will be able to drive the classic means of daily use such as combine harvesters, sofas, buses and much more! 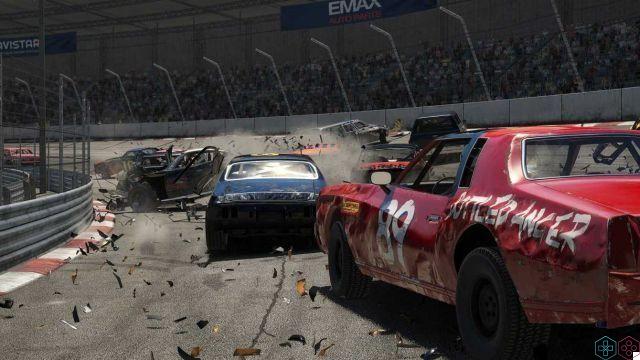 But some destruction here? - Wreckfest review

As mentioned above, destruction is the real master of the title. In fact, whoever developed Wreckfest also created FlatOut 1 and 2, in which the respectable were not welcome. Of course, to have these premises, however, the vehicle damage system and game physics should at least be satisfying, and damn if they are!

Each car and a half available (in the not so extensive list) responds differently to commands. The feeling of heaviness or lightness when driving is emulated really well, as is the change in grip between dirt and asphalt. Although it cannot be defined as a simulation title, the physics of Wreckfest allows it to have a much less arcade imprint than usual. Every ramming and accident causes something to the vehicle which, in the worst cases, turns into a small box, loses its wheels or catches fire, making it impossible to finish the race.

The videogame does not allow a clean approach to competitions, indeed it tempts the player to drive in a dirty way as the opponents will try to wreak havoc on our car as soon as they can. What AI adopts is behavior based on bad intentions and rudeness, making the challenges really tough. So difficult that sometimes we had to tweak the options and adjust the difficulty as the semi-realistic physics mix combined with tough opponents made us more than a few really unmanageable races: positive side for those looking for demanding challenges.

There is a tiered progression system in Wreckfest. Based on what happens in the races we will be rewarded with more or less experience points, but it will not be necessary to win to get them. In fact, we happened to get more experience points in a race that saw us being demolished than another in which we managed to get the first position. This is because in the first example we were able to ram more cars, making it more spectacular. 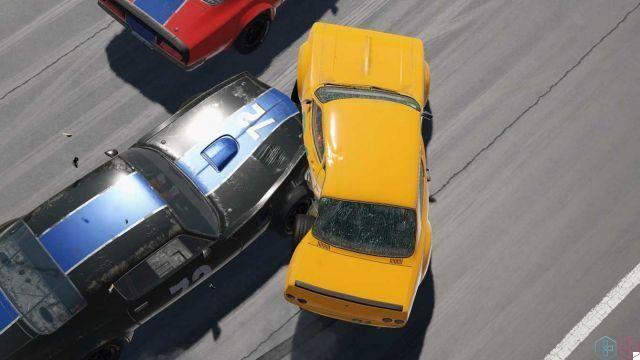 By increasing our level we will unlock performance pieces, aesthetics and other means that can be purchased in the in-game shop. Well yes, even here there is the customization aspect, unfortunately really basic and bare. On the other hand, it is nice to be able to add bodywork parts to the vehicles, in order to reinforce them, weighing them down more or less and acting with a minimum of strategy. As we have already mentioned, the sensations of the pad in the hand are at the top and improve if we deactivate the driving aids, with manual gearbox and clutch implementation.

Let's talk now about the artistic sector that characterizes the title. Let's start with what is not convincing, even if against our habits. Let's say that, in general, Wreckfest (at least on PS4) does not enjoy exceptional graphics. Everything that makes up the background is fairly linear and lacking in detail. The available means, however, are carried out very well, as are the clashes and damage to the latter. Most of the bodywork pieces will remain on the track once the accidents happen and the visual simplicity of the tracks is certainly a trick by the developers to avoid too many slowdowns.

Slowdowns that we have encountered on a smooth PS4. Especially in demolition derbies, where there are a lot of models on the screen, it is often the case that the FPS drops dramatically. Another problem with the title lies in the not-so-fast uploads, which are often tedious.

One of the main shortcomings of Wreckfest is that of local multiplayer. In a racing game it is almost necessary to insert the split screen, especially in this one, then, where the epicenter is represented by destruction. The split screen would result in an inevitable increase in the resources used, decreasing the general fluidity that is not already excellent. However, in an era in which video games that allow you to share the experience with a companion close to you are scarce, being a car game it is certainly negative. 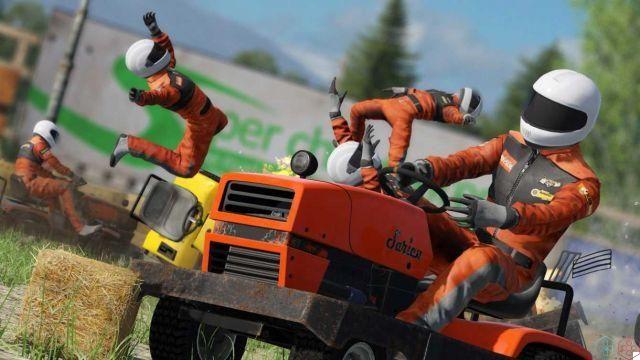 We conclude this Wreckfest review by summarizing our opinions. The title developed by Bugbear Entertainment has all in all convinced us. The fun it can give is so much and we really enjoyed both the physics and the damage system. Too bad for the lack of local multiplayer which would certainly have guaranteed an extra point to the title, however there is the online one, so we don't feel like penalizing him that much.

If you are looking for a course title that you enjoy, halfway between arcade and simulation, and that at the same time is not so simple, Wreckfest is for you!

add a comment of Wreckfest review: save who can!