Wonder Boy Review: The Dragon's Trap, we return to the World of Monsters after 28 years

Let's go back to playing one of the best games of our childhood: 28 years have passed, but Wonder Boy is still able to give hours and hours of fun. Want to know if it's worth paying a new ticket price to return to the Monster World? We've thoroughly stripped the restoration work done by DotEmu, so you're in the right place!

As long as the nostalgia factor manages to bring one of the great classics of the past back to the console, it can only do good. That's what i have managed to accomplish DotEmu guys evaluation with Wonder Boy: The Dragon's Trap, which in fact is a game of ben 28 Years ago. But giving it a quick look and trying it with your hand, would you say it? Perhaps only the control system has remained the same as it once was, in its light woodiness and intricacy. Everything else has been redone from scratch. In short, it's a new game, but it's not.

It is a remake from scratch of the dear old man Wonder Boy III: The Dragon's Trap, the fourth video game (despite that "three" in the title) in the Wonder Boy series, produced by SEGA e Westone in 1989 to Master System e Game Gear, but not for Mega Drive. A somewhat controversial series in fact, that of Wonder Boy: like so many other videogames and anime from the land of the rising sun, there have been false translations, half translations and even overlapping. So that, very often, the Wonder Boy and Monster Boy / Monster World titles got confused. However, the few who know him in our country know him as "Wonder Boy", That's enough.


Let's see together why we were bewitched by the restoration work of this small and imperishable videogame pearl.

Clash with the Great Dragon

The narrative premises of Wonder Boy: The Dragon's Trap, despite being a remake, they are the same as then: the soul of the game has remained the same, since it has not been revised, nor upset, nor rethought. The beginning of the game picks up the ending of Wonder Boy in Monster land, where the boy of wonders is in the castle of the Dragon (obviously made much shorter and simpler than the infernal labyrinth of the previous title), fully armed and almost invulnerable. We are basically indestructible, but trust that the feeling of omnipotence will not last long. Wonder Boy manages to be a very bad video game for 2000s users.

Once we beat the dragon our hero is struck by a curse that turns him into an anthropomorphic lizard, and from here comes the title of the adventure "la trap of the Dragon". From this moment on we will go through various transformations, becoming birds, mice, sea monsters and so on and so forth, until we are able to complete the adventure, defeat the final enemy and regain our human form. A nice fact that represents a difference from 28 years ago is the possibility of playing with Wonder Girl, as well as the male counterpart of the protagonist. And even the title will change, becoming Wonder Girl: The Dragon’s Trap! And there are those who still accuse video games of machismo.

To regain the likeness of the cute boy we were we will have to explore the length and breadth of the World of Monsters, wandering through a series of worlds all rigorously two-dimensional and composed of macro-areas all interconnected with each other. The game structure is completely unchanged, typical of the horizontal scrolling adventure classics: making our way through countless dangers and enemies of all sorts we will have to reach the end of the level, where a demanding boss fight against the bad guy will await us. 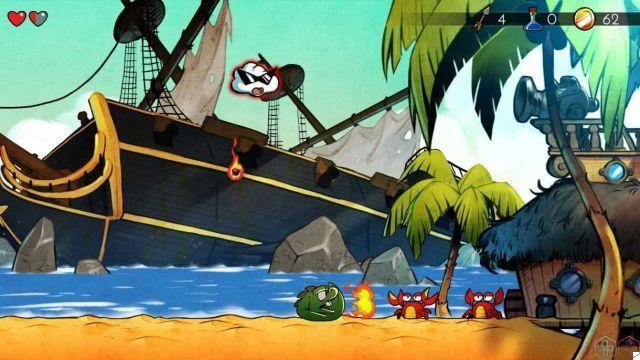 Wonder Boy: The Dragon's Trap it maintains the same complexity that was typical of the original title, an openly difficult game that requires quick reflexes, patience, audacity and reflection. Without recalibrating the gameplay in the least, the remake forces us to memorize properly the patterns of the many monsters that will block our way, as well as the position of the traps, the architecture of the stages and the hiding places of the chests in which to find upgrades or healing potions.

It is perhaps in these details that Wonder Boy begins to slightly feel the aches of old age: the woodiness that distinguished some exponents of the genre in the 8-bit era reappears in a control system not always responsive and even with a somewhat uncertain window of invulnerability. But this is how the video games of the past and the rest were played Wonder Boy: The Dragon's Trap does not want to upset or change the genre, but to lead to its rediscovery. And it is precisely in this way that, little by little, the imperishable charm of old school adventures returns to the present day, in which every “painting” passed without suffering damage represented a small, great personal satisfaction. The new The Dragon's Trap it preserves with obsessive care all the beauty of a timeless, severe and punitive work against those who underestimate its level of challenge.

Wonder Boy by name, Wonder Boy in fact: the “wonder” factor completely invests the technical, graphic and artistic sector of DotEmu's work. The game is literally a marvel and a feast for the eyes, where you can see the maniacal care for every animation, every corner of the levels, every enemy faced. Even the items collected are cured! In this way it was possible to bring in 2017 a game from 28 years ago, released on consoles in which at the time there was already a miracle for those four pixels on the cross.

If you don't believe the miracle compared to the old version of Wonder Boy, know that the developers have introduced one curiosa feature which allows at any time to swap the graphics on the screen between that of the old game and the new one. You will thus find yourself making a comparison between day and night: a pixelated (albeit nostalgic) screen versus the same 1: 1 scale game, but completely redesigned by hand and animated with masterful skill. This update alone is worth (almost) fully the 20 euros required to enjoy the adventure once again.

add a comment of Wonder Boy Review: The Dragon's Trap, we return to the World of Monsters after 28 years