Between sea monsters and an infinite hunger, we discover in this review how to dominate the impetuous winds of the sea in Windbound

We probably all remember that recent period in which the Steam store was invaded by survival video games in Early Access, some developers believed that in order to break through it was necessary to chase the disruptive success of DayZ. Or the one dominated by Rogue Like, led by the timeless The Binding of Isaac and its infinite gameplay opportunities. Two worlds as different as they share the same need for the player not to die badly and lose everything. windbound it refers precisely to these two videogame worlds, in a very interesting experiment of which we are now going to review the PC version.

At a cursory glance, Windbound might look more like Breath of the Wild than anything else. However, with this statement one could not be further from reality. The Nintendo video game has very little in common, except for the aesthetic sector and some small gifts. So what is Windbound? It is a video game developed by 5 Live Studios and published by Deep Silver, a developer primarily known for making Satellite Reign. So let's analyze Windbound in this review.

Mysteries under the sea - Windbound Review

The game begins during a storm, in which our protagonist in the middle of the sea tries to dominate her boat. To make his labors vain is a huge sea creature similar to a Nautilus, which causes it to fall into the water. Victim of a shipwreck, an archipelago wakes up near the center of the aforementioned storm.

The girl now can not help but survive and try to piece together the pieces of a fragmented history, that tells the relationship between strange sea creatures and the human race. It is a hermetic story that must be completed piece by piece like a puzzle. Each bas-relief, voice and object are part of it, the knowledge of the ending without these elements could in fact be incomprehensible. However the main focus is not the story, but lies in the actions of our protagonist. 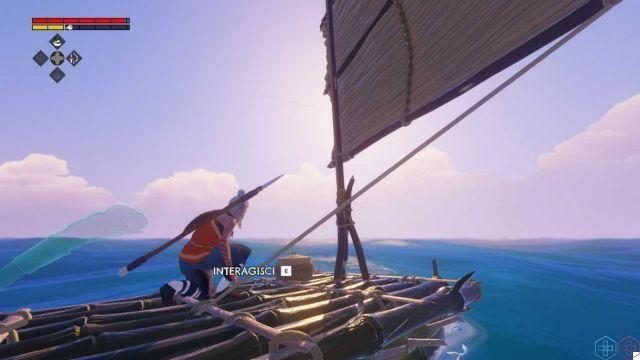 We are not told much about what to do, but the only actions available speak for themselves: collect, attack, build, eat, jump and run. At the base there is a video game survival where it is necessary to gather resources to create more useful and powerful tools, such as a spear to kill or a hatchet to cut down a tree. After that the game will give us the first advice, that of build a small canoe to be able to cross the sea and reach the next island.

The aim is to find the three key shells that will allow us to advance in the game, but not before having won a challenge against the stormy sea. The game is divided into five chapters and each takes place in different archipelagos. In case we die and have chosen Survival Mode (the standard one), our destiny will be that of go back to the first chapter with only the tools we have in our pockets (bags excluded), having lost the boat and doing it all over again.

If we then consider the fact that archipelagos are formed in a procedural way, it becomes clear what the game is simile a un rogue like, as well as a survival. Now let's go into more detail and try to understand each other better. 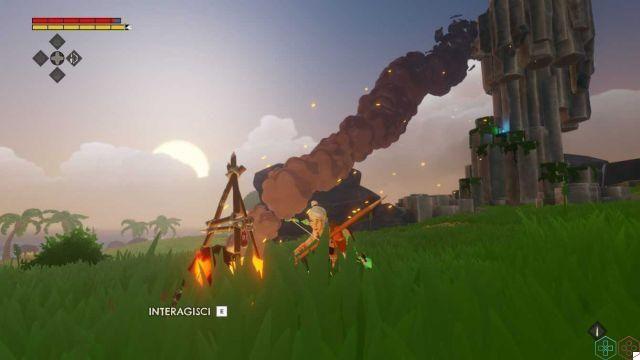 The Challenges of Survival - Windbound Review

From the beginning we have a small knife that will allow us to tear away the tall grass or attack the poor wild boars present on the islet where we happened to be. There is no way to find berries and mushrooms from the ground for satiate hunger and health, in fact, we will often have to check these parameters by placing our eye on the upper area of ​​the screen where there is the red and yellow bar. The latter in particular is exhausted with all our efforts, slowly recharging and sometimes decreasing in a semi-permanent way.


In fact, during the early stages of the game it will be necessary know how to dose our actions: runs, swims or attacks. This is in order not to find ourselves with the bar totally exhausted in the most excited moments. However, to restore it (along with that of health) it will be enough to eat a little food, which however is not so easy to find. A mechanics perhaps too punitive, which inevitably reduces our ability to explore, also forcing us to walk slowly and dose our actions too much. 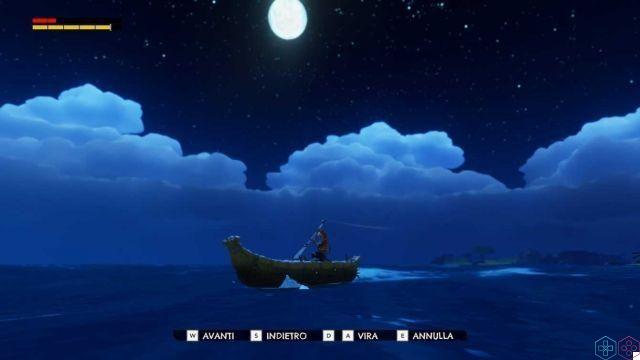 Cradles by the sea - Windbound review

As soon as we find new resources, the game will show us all its uses on the interface. The crafting system is very standard and it works fine, were it not for an interface that is not very intuitive to use the controller, but good with a mouse and keyboard. Although basic, it still contains the greatest satisfactions, as it allows us to build and upgrade our boat. According to the quality of the resources, there are different types. It starts from the main body moved by an oar, passing to the construction of the main shaft, which will allow us to travel lulled by the sea breeze. There are also many other additions that we can make, such as the construction of a wooden bridge "to be polished".

By expanding it we will also create space for a campfire with which to cook and work the leather, or place useful containers. Although our movements at sea are mostly pleasant and relaxing, as the adventure progresses they will be more and more complicated to deal with. Our boat will have to withstand the blows of strane creature marine, or we'll have to be agile enough to dodge coral reefs and rocks to not see the canoe fall apart, resulting in death by drowning if we're not close enough to shore.


Speed ​​of the canoe and turning ability which greatly depend on wind direction. Factor that can change suddenly, which sometimes forced us to stop in the middle of the sea having to plan our approach again. To make it in our favor we can loosen or tighten the tree rope, but sometimes with unsatisfactory results. All to chase a hybrid game style between arcade and simulation, which doesn't always work. 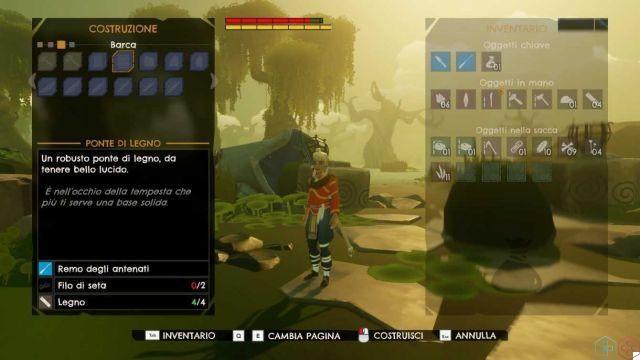 Navigation, in addition to being useful for searching for shells, allows us to reach secondary islands in which it is possible to find special resources. There are in fact green stones to build unique weapons, or a mysterious blue crystal currency. The former are quite useful and allow you to use, for example, bows that can slow down time or create areas of invincibility.

The coin, on the other hand, can be spent at the end of each chapter to be able to obtain useful passive upgrades including: reduction of hunger consumption, resistance to poison, obtaining more fragments and more. However as a reward for completing an important section of the game, we would have expected something more impactful in terms of gameplay. Before moving on to the technical side, unfortunately, we must face what concerns the fight. The islands of the game are varied and as we advance between the chapters we will explore different environments. Within them we will find the endemic fauna, a source of food and resources.

To get what we need we will therefore have to face them with our weapons. However, whether with spear or dagger, we have a single attack available without the shadow of a combo. Going therefore to debase every fight to simple waits for the attack window and dodging at the right time. And if we do something wrong, the animal in question will punish us severely and in the worst case killing us. 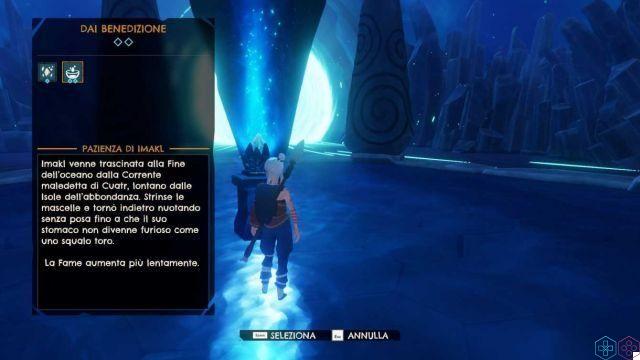 Death is certainly the most unfortunate event in gameplay, but unfortunately on the technical side it is also possible for sudden crashes to occur. This will teach the player a hard lesson: Windbound does not automatically save. The combination of manual saves and crashes is the worst thing you can find in a survival with elements of rogue like. The developers have in fact already announced that they are working on a fix for the crashes and pondering the introduction of automatic saves.

From a performance point of view, the analysis is much rosier. The cell-shaded graphics and optimization allow the game to easily maintain 60 FPS in 108op on a mid-range computer. However in case you have an underperforming computer, there are enough options to best shape the viewing experience. Windbound is also one delight to see, thanks to its bright and never too violent colors. The volumetric light creates pleasant sunsets and a light morning fog can also be felt.

Also to accompany us there are music and a sound sector really well done. In addition to being minimally invasive, they accompany every action well. During the exploration it is in fact possible to notice how the music changes according to which enemy we have in the vicinity, or even if they have spotted us but without attacking us. Many little goodies that are well appreciated. 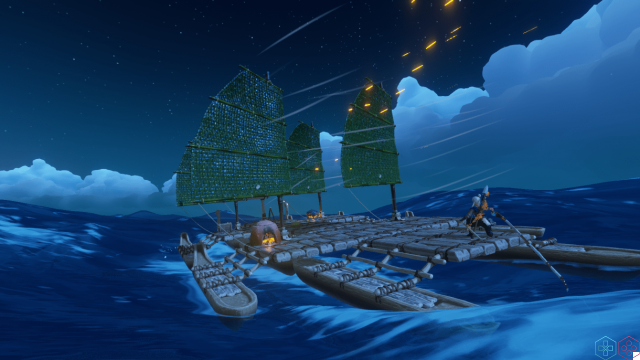 As seen in this review, Windbound is a video game that definitely it is not to everyone's taste, he wants to do many things and looks something else. An experiment that may not be very successful, but that it amused us for its uniqueness and courage to innovate. There are some gameplay elements that would have required more care, especially in combat. However the developers seem well intent on fixing everything, especially the crashes.

We recommend this title to anyone who wants an exploratory game and to those who want to face difficult challenges with some defects. However, if you are still interested but the difficulty discourages you, you can always opt for the Story mode, which at death allows you to keep all the inventory, progress in the chapters and easier fights.

Windbound is available today on PS4, Xbox One, Nintendo Switch, PC and Google Stadia. To stay up to date on video games and technology, we recommend that you continue to follow us on the pages of techigames.

add a comment of Windbound review: between storm and calm sea